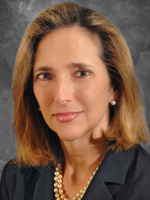 Elizabeth Haecker Ryan is a Director of the firm Coats Rose, resident in its New Orleans office.  Ms. Ryan practices in the area of general civil litigation, with a concentration in admiralty, construction, environmental, insurance defense and coverage, and pharmaceutical and medical device law.  For 27 years, Ms. Ryan has litigated matters involving toxic tort, class action, maritime personal injury and property damages, personal property damage arising out of fire, products liability, pharmaceuticals, interstate transportation of hazardous substances and the sale of same by maritime transporters.  She also serves as a mediator and as an umpire in insurance appraisal matters.  In 2011, Ms. Ryan was recognized by Louisiana Life Magazine as one of the top twenty-five women attorneys in Louisiana.

Ms. Ryan received a Bachelor of Arts degree from Newcomb College of Tulane University in 1975, and a Juris Doctor from Tulane University Law School in 1980.  She pursued architecture studies at the Tulane School of Architecture from 1975-1976.  She authored "Jones Act Seamen and the Award for Loss of Society: A Post-Higginbotham Analysis - Ivy v. Security Barge Lines, Inc." , Vol. IV, No. l, The Maritime Lawyer, and served on the Moot Court of Tulane University Law School. She clerked for the Honorable George Arceneaux, Jr., US District Court for the Eastern District of Louisiana, from 1980-81.

Ms. Ryan has lectured on numerous occasions on environmental, insurance and professional topics.  Ms. Ryan has been recognized by Best Lawyers in America® in the area of professional malpractice law and by Louisiana Super Lawyers® in 2007, 2008 and 2009 for her work in class action/mass torts, transportation/maritime and environmental law.