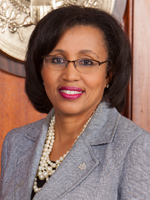 Judge Roby is the Chief United States Magistrate Judge for the Eastern District of Louisiana.  She has served on the court for twenty-one (21) years where she serves on the court’s technology committee. She has been active in the American Bar Association during her tenure on the bench and has served in various leadership roles and was responsible for the success of the Diverse Leaders Academy and the Professional Success Summit (PSS).  The PSS gathered diverse leaders for three (3) days to train future leaders in the areas of marketing, branding and networking.

Judge Roby serves on the Dean’s Advisory Board of Tulane Law School and an Adjunct Professor. She teaches a course on E-Discovery and Digital Evidence.  Judge Roby was the chair of the Tulane Law School’s Black Alumni Reunion held in February 2019. As chair of the reunion committee, Judge Roby also was the visionary for the Tulane’s BLA Newsletter, which was first launched after the reunion and now issues quarterly.  Judge Roby recently joined other notables at the Georgetown Advanced E-Discovery Institute where she did an eDTalk on Diversity on the E-Team highlighting the importance of diversity on the E-Discovery.

Her commitment to the community is unsurpassed.  She was integral in saving her high school, has served as the coordinating judge over a pipeline program in New Orleans for the last nine (9) years, and as a mentor to area young female lawyers where she hosts a quarterly round table to discuss issues of interest and dispenses sage advice on career goals and challenges.