And then there were two: Moot Court final round is Jan. 28 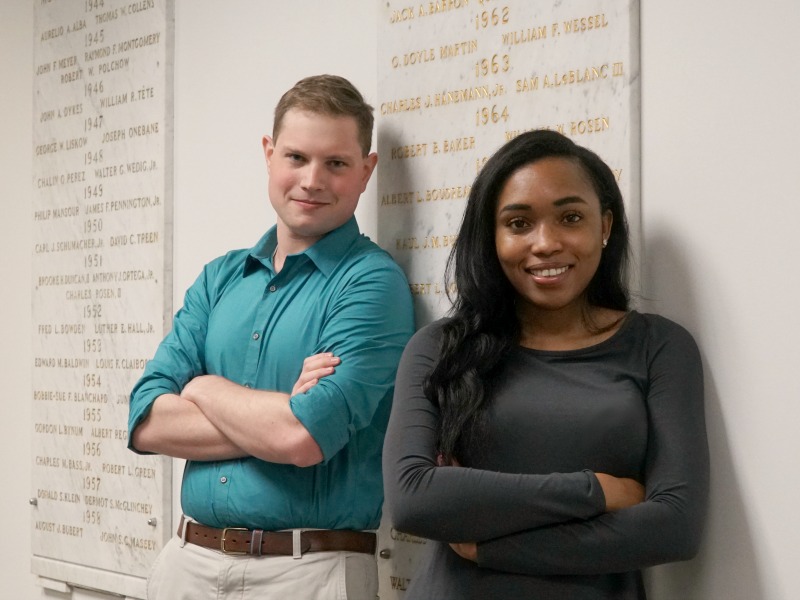 Joseph Trytten and Julissa Hunte are the two finalists who will compete Monday in the Moot Court Honorary Round before a panel of three federal judges. (Photo: Alina Hernandez)

The back wall of the Wendell H. Gauthier Appellate Moot Court Room,  in the heart of the law school, is lined with a series of mounted marble slabs, the oldest dating back to 1930.

The Moot Court tradition is strong at Tulane, and getting stronger with a recent infusion of alumni gifts dedicated to growing the program, and more interest from students to compete.

The tradition will be on full display in what is considered the championship of champions, the Moot Court Honorary Round, to be held Monday, Jan. 28 at 4:30 p.m.  at the law school, 6329 Freret St. Three notable federal judges will preside as two finalists, Julissa Hunte and Joseph Trytten, both third-year law students, compete to be the all-around winner and to see whose name will go first 'on the marble.'

"The Honorary Round is a testament to the hard work that students put forth to develop strong and effective oral advocacy skills," said Tanner Beal (L'19), the Administrative Justice for  Intraschool Moot Court. "As one of the opportunities all students have to showcase their practical lawyering skills, this culmination of the Intraschool competition highlights the tireless work of all students who competed.”

Trytten, who is a coach for the Criminal Court appellate moot court team, said he enjoys appellate advocacy.

“It’s a very civil debate, arguing the law," Trytten said of the competition. "I am competitive. And I admit, I do pour my heart and soul into it.”

Hunte sees her role a little differently, and it's not just about the law. She works with the Black Law Student Association and coaches the Moot Court team that will take part in the PACE Environmental Law Moot Court competition coming in February.

“It’s important to have oral advocacy skills, but for me, also to promote diversity in moot court and oral advocacy,” she said. “I want to be an example for the younger classes to see that this skill set is for everyone, including first-generation law students.”

Moot Court competitions have been a Tulane Law tradition for more for more than 80 years. But some years ago, the competition had faded to become a shadow of its former self, usually with judges and competitors the only attendees. Last year, generous donations from alumni – launched with a lead gift from Evan Trestman (L ’77) -- helped revamp the program, and it played out in the spring to a packed house before a distinguished panel of federal judges.  Subsequently, alumni and partners with the firm Herman, Herman & Katz enhanced the program with an endowment of the Harry Herman Moot Court Excellence Fund to be used for moot court programming and the trial and appellate advocacy program.

The moot court program now has 53 students in competitions throughout the year.

Like going to court and arguing complex cases, Moot Court events are competitive and charged. There is extensive preparation.  The students are both friendly with one another – as well as competitors. The cases call for a critical exploration of the law, arguments backed by precedent, creativity and the cleverness to make a plausible case and swing arbiters in your favor.

In all, eight students see their names go on the marble, all the winners of the early rounds in the various areas of competition.  The other six competition winners are Chelsey C. Antony, Patrick M. Bollman, Grace A. Hancock, Margaret E. Martin, Benjamin J. Russell and Michelle M. Sloss.