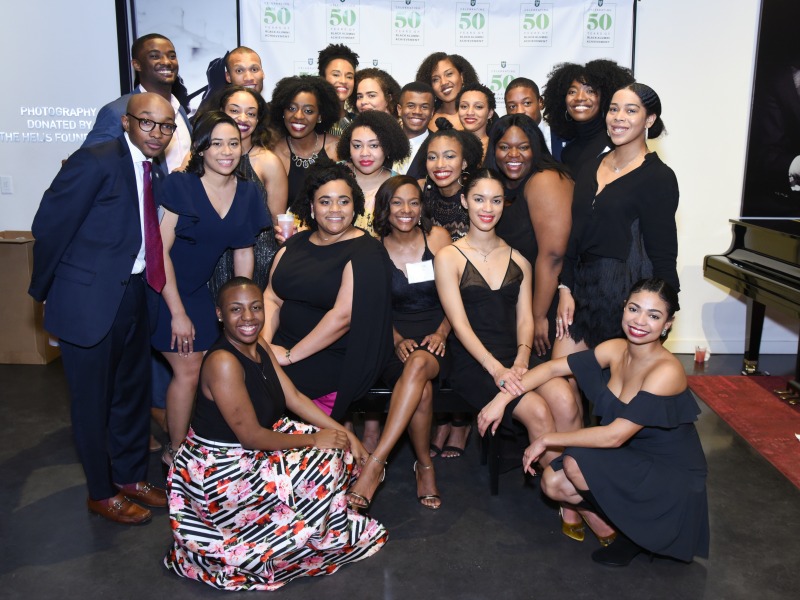 Sherri Jefferson (L'94) made the trek from California 'home' to Tulane Law School  with few specific expectations about what the school's inaugural Black Law Alumni Reunion would bring.

"I thought it would be nice to hear this panel or that panel, and maybe see some of my old classmates," she said. "But from the first panel (the Dreyfous Lecture on Civil Liberties and Human Rights featuring Dorothy Roberts), I was riveted. Everything after that was the same way."

Jefferson said she was impressed with panels on pioneering black alums, on advancing your career as a black lawyer and creating opportunities for others who follow, and panels on race and gender and the law. And, she thought the choice of keynote speaker CNN political and legal analyst Angela Rye, known for challenging institutional norms on race and gender,  "showed how Tulane Law is open to having a diversity of opinions on campus."

The reunion was a marquee moment for the law school,  a celebration of 50 years of achievement by black alumni, honoring the graduation of the man who broke barriers and desegrated Tulane Law in 1968, Michael Starks.

"I am pleased by, and proud of, the administration for conceiving, planning and fully supporting this event,"Jefferson wrote in her post-reunion survey. "I have never felt as valued an alumna as I did this past weekend."

In all, some 375 alumni traveled from across the country to reflect on these  achievements during the weekend of Feb. 8-10. They returned to familiar surroundings, now forever different because of them. They went home buoyant for the future, recharged and recommitted to pay it forward to the next generation.

As the Hon. Karen Wells Roby (L’87) put it, “we can take this weekend and harness a more intentional community of African American Tulane lawyers positively impacting the community.”

“For me, it was rejuvenating and provided a refueling to continue the journey,” said Roby, now the chief magistrate for the Eastern District of Louisiana. “It also was a period of reflecting on the fact that ‘though our former days were small, yet our latter days would greatly increase.’  It’s a reminder of the success seeds that began at TLS and how they have been planted and continue to blossom in these uncertain times.”

Alums crossed the span of decades – those early pioneering graduates, numbering in single digits sometimes – joined the big, boisterous classes of the '80s and '90s, some with more than 50 black students among them. Throughout the weekend, they heard others who came before and after tell of their own career paths, their successes and challenges.

They explored mentorship possibilities, networked with current students and danced the night away with classmates that were now judges, high-powered attorneys, leaders in business and government. They reminisced and rejoiced for what is now a far more promising future.

Emotions ran high from the first panel that highlighted the stories of early graduates and the hardships they overcame as they trickled into the profession to the last farewell brunch when the classes of the late '60s and the '70s were honored for their pioneering achievements.

Michael Pegues (L’91), a partner at Polsinelli, put it succinctly on his Instagram feed along with a photo of those trailblazing graduates:  “The Tulane Law School welcomed home its African American alumni this weekend, and it was all red carpet, all weekend,” he wrote. “These alums made it possible for me to attend Tulane Law School and ultimately provide for my family. Thank you for your perseverance, endurance and determination.”

Larry English (L'83), CEO of English Consulting Group with a long career in construction law and public service,  spoke during a career-centered panel during the weekend, and attended several others including one celebrating 40 years of clinical education at his alma mater. He said the weekend was an emotional one for him.

“Tulane Law School changed the trajectory of my life; I was the first in my family to go to college,” he said. “I have a grandson living in a world I could not have imagined. Ultimately, whatever he accomplishes can be traced back to the fact his grandfather graduated from Tulane Law School. So this is a very emotional weekend for me, it all kinda just came home for me.”

Current students were awed by the weekend, which brought many of them together with pioneering black lawyers.

"I am proud to say that I am a black law student at Tulane Law," said second-year student Tanisha Manning, who also is the president of the Black Law Student Association. "My law school....has acknowledged all the black graduates that came before me. My heart is full."