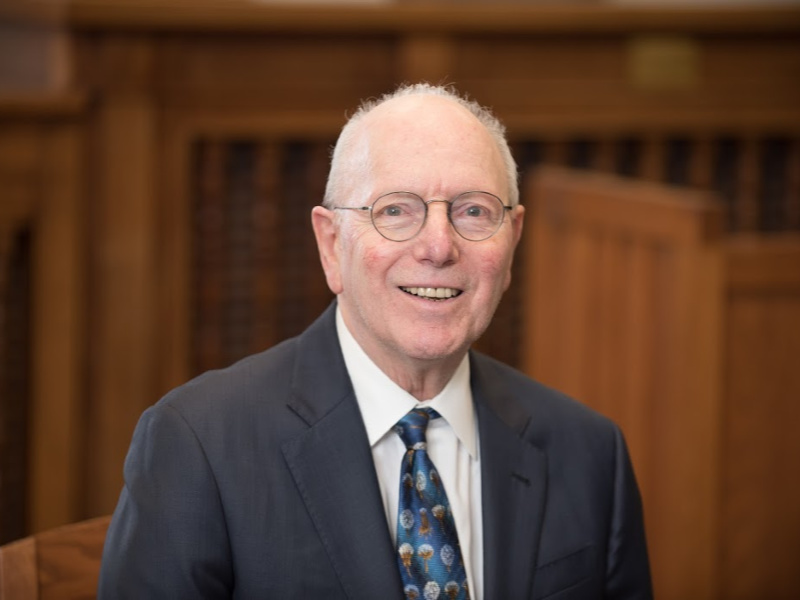 Few people have had a greater influence on maritime law than Tulane Law Professor Bob Force.

As Professor Martin Davies, Director of the Tulane Maritime Law Center, puts it: “Bob’s name is known wherever maritime law is studied.”

Force is a giant in maritime law, and that’s not hyperbole. Both through his research and writings, which have been used to shape court opinions, fill textbooks, and define international policy, and through his teaching of countless Tulane Law students over 50 years who now practice all over the world, Force shaped the field of admiralty law.

For his unmatched contributions, Tulane President Mike Fitts on Thursday bestowed on Force the University’s highest research honor, inducting him as one of four inaugural members of the Tulane University Research Hall of Fame.

“In his 50 years at Tulane Law, Force has left an indelible mark through his scholarship on the legal community around the world,” said law Dean David Meyer.  “And through his visionary leadership in founding and building Tulane’s Maritime Law Center, he has transformed Tulane and secured its place as the world’s leader in the field.”

Early in his career, Force clerked for state and local federal judges in Pennsylvania and Philadelphia and taught at Indiana University. He has taught and written about many areas of the law, including criminal law, criminal procedure, evidence, transnational litigation, international commercial arbitration and more. He was named a Special Master to the U.S. District Court for the Eastern District of Louisiana to oversee changes under a federally-mandated court order at the Orleans Parish Prison – and became the national expert advisor on how to manage oversight at complex correctional institutions.

After joining Tulane Law in 1968, he encouraged the administration to begin a maritime law program, where he notched his most significant contributions to national and international legal scholarship. He authored two casebooks still used in law school and multiple book chapters on the leading admiralty treatise, Benedict on Admiralty.

His work has been cited by the U.S. Supreme Court, the First, Second, Fourth, Fifth, Seventh and Eleventh Circuit Courts of Appeal and more than 25 federal district courts across the country. And he has been honored internationally, including by the president of Panama with the Order de Vasco Nunez de Balboa, for distinguished diplomatic services and contributions for his work in helping draft the Panamanian Code of Maritime Procedure.

Along the way, numerous Tulane Law students received his kindness and generosity in and out of the classroom, through his genuine concern for their growth in the legal field and in life.  He and his late wife, Ruth, raised their own two sons and became stand-in family for countless students navigating law school. In the classroom, in the halls of Tulane, in and out of his home and professional life, he taught and mentored hundreds during his 50 years at Tulane. They are all part of his family and his legacy.