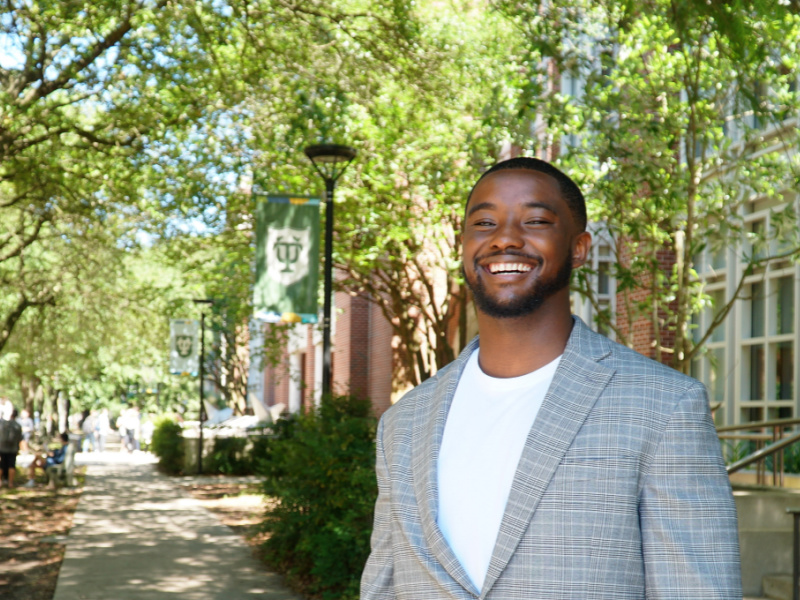 For his dedication to his classmates and service to the community throughout his three years of law school, Kasheem Shane Thomas has received one of Tulane’s prestigious Crest Awards.

Thomas, who is currently the 3L Class President, received the Gary Lawton Fretwell Award, named for a former Tulane Associate Vice President for Student Affairs. The award recognizes one undergraduate and one graduate student each year who “have served in leadership roles within student organizations and have contributed to the growth and success of the organization as well as the development of other students.”

“Throughout his three years at Tulane, Shane has demonstrated a strong commitment to his university community and the general public,” wrote law Dean of Students Abigail Gaunt in her nomination letter. “Shane has served in various leadership positions at Tulane, with hopes to leave his mark and leave the school better than he found it.”

The Crest Award is an all-campus recognition sponsored each year by the Division of Student Affairs. The awards recognize students’ demonstrated leadership, scholarship, and community service outside of the classroom.

Thomas has worked with the Tulane University Legal Assistance Program (TULAP), assisting lawyers in providing free legal advice and representation to members of the Tulane community. Additionally, he has served children in the New Orleans community through his work with the Tulane Juvenile Justice Clinic by tending to their legal matters. Additionally, he helped the community through the Volunteer Income Tax Assistance Program.

In addition to his work in the Tulane and greater New Orleans community, Thomas has served in various leadership positions at Tulane; he co-founded the Black Men's Collective, a small subsidiary of the Black Law Student Association that seeks to strengthen relationships among the Black men of Tulane Law. Also, he has taken part in the Honor Board Council, which seeks to uphold the integrity of all students at Tulane.

Thomas was also a member of Tulane Entertainment & Art Law Society and the Sports Law Society.

As a student leader, Thomas served as president of his third-year class, taking on the challenge during an unprecedented year of a pandemic and remote learning. He was a member of the BLSA mock trial team which went on to the National Black Law Students Competition and he competed nationally with the Moot Court program’s Mock Trial Team which advanced to the semi-finals during his tenure.

“In his time at Tulane, Shane has done everything in his capacity to leave his imprint on a place that feels like home to him,” Gaunt wrote.