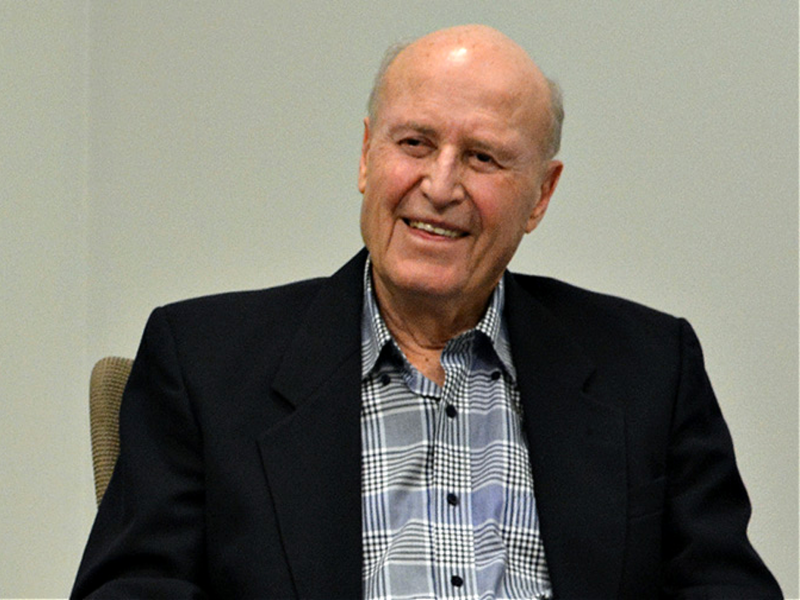 To know Edward Sherman, former Dean of Tulane Law School and a preeminent scholar in complex litigation, was to have a lifelong friend. His empathetic leadership style helped move the law school into the future.

“He was the nicest guy, almost too nice to be the Dean,” said longtime law school friend and colleague Professor Joel Friedman. “He was a compassionate man, so thoughtful. Everyone who knew him liked him.”

“Beyond his exceptional contributions as a scholar, teacher, and academic leader, Ed will be remembered with deep fondness by generations of his former students and colleagues for the warmth and kindness he brought to every interaction, no matter the pressures of the moment,” said Law Dean David Meyer. “Through his impact and excellence as a scholar and his qualities of caring and compassion as a human being, Ed personified what makes Tulane Law such a special community.”

Sherman lived a rich life, was an accomplished scholar in complex litigation, class actions, military law, civil procedure and a pioneer in the art of Alternative Dispute Resolution. He was a 1959 graduate of Georgetown University and earned his LLM in 1962 and an SJD in 1981, both from Harvard Law School. He also received master’s degrees in 1962 and 1967 at the University of Texas at El Paso.

Yet, friends and family say,  he was much more than just a scholar. He was fiercely interested in protecting the marginalized, and actively worked for integration and equality during the Civil Rights movement and through his pro bono work.

His time in active duty during the Vietnam War had a profound effect on him, his family said, and he worked years later to protect those who would not serve in the war receive amnesty. He later would travel to the Republic of Vietnam at the request of USAID to assist the country in drafting part of its Code of Civil Procedure.

Sherman was a husband, a father, and a lawyer but also was utterly devoted to literature, history and poetry. He was, in all ways, a renaissance man.

Born in El Paso, Texas, in 1937 during the Depression, Sherman was the son of the city’s former mayor, Ray Sherman and his wife, Mary.  His father died when Ed was 9, and his mother when he was 16, which thrust him into adulthood early. Sherman, with the support of his lifelong friend Dolph Hatfield and his aunts and uncles, went on to be valedictorian and president of El Paso High School in 1955.

He headed to Georgetown University the same year, majoring in philosophy. At Georgetown, he thrived, diving into poetry and literature, and becoming editor of the poetry journal as well as feature editor of the Hoya student newspaper, his family said.

In 1959, he enrolled in Harvard Law School, where he met his two greatest loves: the law and his wife, Alice, to whom he was married for 59 years.  After graduating from Harvard, he worked as a legal aide for Nevada Governor Grant Sawyer and wrote articles for various publications, including The New Republic and The Atlantic.

In 1965, he was called up to active duty in the U.S. Army during the Vietnam War, where he worked in the Army Pictorial Center. There, he was charged with notifying families of their son’s deaths and often viewed daily videos for the Pentagon on the war’s progress that were produced at the Center.

“He experienced the profound grief of mothers and fathers as he showed up at their doorstep,” said his son, Paul Sherman. “He was deeply disturbed by the horrors he saw in the raw video coming in daily from Vietnam and became a staunch opponent of the war.”

Sherman remained in the Army Reserve in the JAG Corp for the next 20 years, reaching the rank of Lieutenant Colonel.

“We were so lucky to have him in our lives,” said his son, Ned Sherman. “He believed that all people, regardless of their circumstances, should be treated with dignity and respect. He went out of his way to set that example for his children and grandchildren. As a lawyer, he unabashedly advocated for some of the least fortunate, forgotten, and unpopular people.”

In 1967, he became a teaching fellow at Harvard Law School, a job that launched his career as a law professor and dean. Two years later, he began teaching at Indiana University School of Law, where he became one of the country’s leading experts on military law. There, he also maintained his activism and social justice efforts.

From Indiana, he took a position at the University of Texas Law School, where he honed his expertise in civil procedure, complex litigation, ADR, among others.  His friend and colleague at Texas, Professor Michael Churgin, the Raybourne Thompson Centennial Professor of Law, recalled that he was a wonderful and supportive colleague, who was among the best complex litigation educators in the nation.

“When he left Texas in the 90s, you definitely heard from former students who repeatedly mentioned him as being important to them in their careers and lives,” said Churgin.

Sherman joined the Tulane Law family in 1996 as its Dean after 19 years on the faculty at the University of Texas Law School.  His kind personality and his willingness to solve problems made him beloved by faculty and students alike. It was not always easy, say friends and colleagues. He arrived at Tulane Law at a time when there was tension among faculty about moving the law school into the future.

“Over time, we were able, under his leadership, to heal many wounds and move forward with major initiatives, including a one-of-its kind Ph.D. in Law program for Mexican Law school professors,” said Friedman, who ran the program.  “Ed was a person of unquestioned integrity, valued judgment, and deep personal concern for students, staff and faculty.  Some said he was too nice to be a dean.  But Tulane Law School is much the better for his having been both our Dean and, thereafter, valued colleague.”

When he stepped down as Dean in 2001, he remained an active leader on the faculty until his retirement in 2015, becoming professor emeritus. In 2012, true to his love of poetry and literature, he endowed funds to create the Dean Edward and Alice Sherman Law and Literature Room in the law library, a place “where law students can read, browse and check out literature and fiction related to the law.” The room holds some of Sherman’s collection of books on poetry and literature.

“He wanted law students who, like him, thirsted for literature and poetry to have a space for reading and reflection, as a break from the pressure of law school,” said his son, Paul. His father over the years taught a course in literature and the law, and he spoke at more than one panel at Tulane on the subject.

His kindness and care for colleagues didn’t end there.

When newly-hired Professor Elizabeth Townsend Gard brought her then-toddler, Sid, to the office one day, the then-retired Sherman assured them they could call him Ed and take something from his stash of office goodies anytime.

“And so, whenever Sid came to visit, you would see them run down to the end of the suite, arms opened wide, shouting, "Eddddddd!!!” said Townsend Gard. “ He and Alice made us feel welcome from the start. I will miss him.”

In addition to his significant accomplishments as Dean, Sherman loved his work. He published nearly a dozen books and 100 articles and book chapters, as was the principal drafter of the Texas and Louisiana mediation statutes as well as the Republic of Vietnam’s Code of Civil Procedure.

In 2004, the American Bar Association awarded Sherman its Dean Robert McKay Award “in recognition of [his] . . . commitment to the advancement of justice, scholarship, and the legal profession.” Four years later, the ABA again honored him with a Special Achievement Award for his extraordinary contributions to the improvement of justice relating to class actions and complex litigation.

Sherman served as a litigator, expert witness and amicus in ground-breaking cases involving mass torts and jurisdiction over foreign corporations, and the constitutional rights of academics and students, military and citizens for such organizations as the American Association of University Professors (AAUP), American Civil Liberties Union, the State Bar of Texas and the Louisiana State Bar Association.

Sherman is survived by his wife, Alice, and sons Ned and Paul, his grandchildren Ted, Nora, Katlia and Lila, daughters-in-law Tinzar Sherman and Kelly Sherman, and many other family and friends.

Tulane Law School in the fall will host an event celebrating Sherman’s life.  His family, which has deep ties to Maine, will hold a private remembrance there this summer.