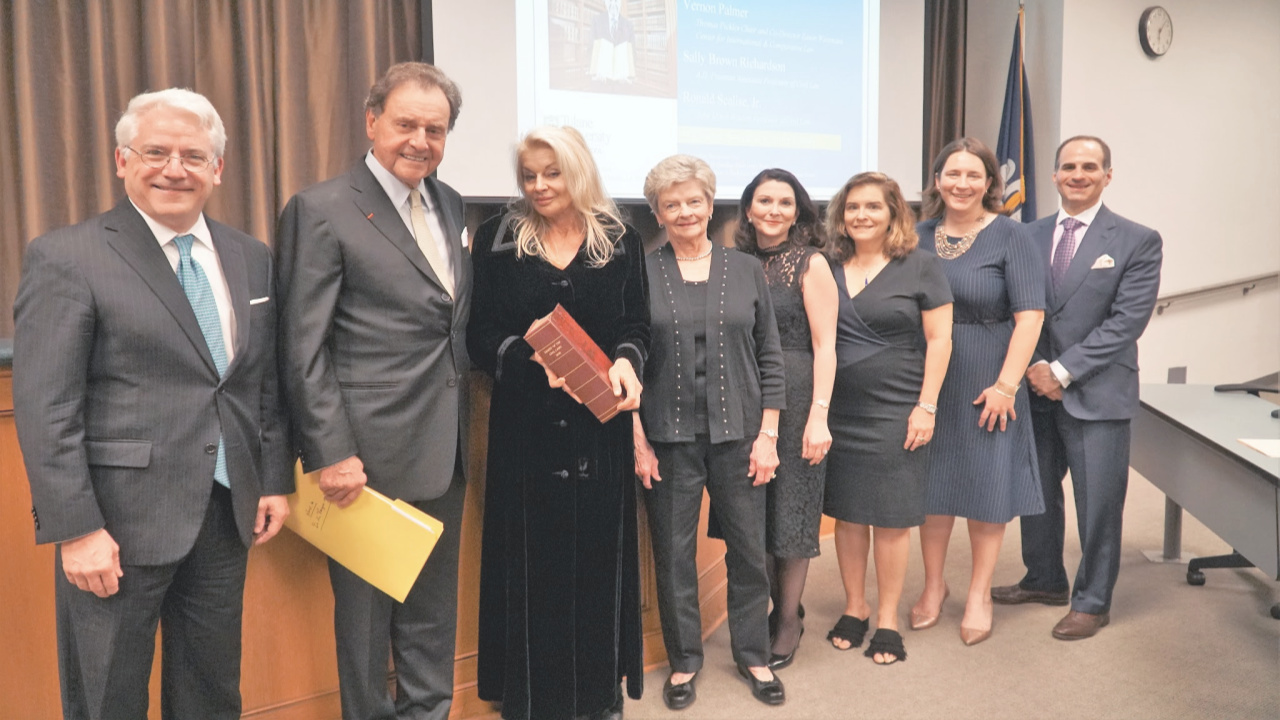 The gift of a two-century-old manuscript is cause for celebration.

Tulane Law faculty honored the gift of the 200-year-old de la Vergne volume, an original work on the Civil Law of Louisiana by Louis Moreau Lislet, on Nov. 6 with a program and reception that brought remaining de la Vergne family and friends,  civil law scholars and pundits to get a glimpse of the document and explore its impact on the state's unique laws.

The law school's most notable experts on civil law spoke about the man who made the manuscript his life's work -- Louis de la Vergne -- and its history and continued influence on student and scholarly learning.

"I believe this is the singular most important document in Louisiana's legal history," said Prof. Vernon Palmer,  whose extensive research on the de la Vergne has clarified its importance to Louisiana's legal roots.

Speakers also included  Prof. Ronald Scalise a principal editor of the Louisiana Civil Code who addressed the history and pitched battles between civil law scholars who studied and debated the work's origins, and Prof. Sally Richardson, whose own work on property law has used the de la Vergne as a cornerstone and who spoke of the volume's continued relevance in student work, research and scholarly activities.

Lislet, the principal codifier of the 1808 Digest of Orleans, wrote hand-written notes in the margins of the volume, which remains the most fabled book in Louisiana legal history.  It is believed to be an original founding document that details the laws of the 1808 Louisiana territory and the thinking -- and origins -- behind of some of the territories' legal foundations.

The manuscript, a thick red-leather-bound, gold-embossed volume is written in both French and English, with Lislet's notes on interleaved pages. The book is the stuff of legal lore, causing more controversy among academics and scholars than any other book in the state’s history, particularly on the question whether the civil code originated from French or Spanish laws.

“This is perhaps the most debated document in Louisiana law -- and the most intriguing,” said Palmer, who has extensively researched the volume and whose scholarship was notable in bringing the book to Tulane.

Louis de la Vergne, a lifelong friend and a classmate of Palmer’s, graduated from Tulane Law in 1965. He made the study of the volume his life’s mission, along with his ancestors’ contributions to the establishment of Louisiana’s civil law.  De la Vergne came from a long line of legal scholars who contributed to the early foundations of Louisiana, and one of his ancestors is credited with establishing the predecessor to Tulane Law School.

When de la Vergne died in 2017, he bequeathed the book to his close friend, Anna Swadling. In January, Swadling traveled from Santa Fe  to New Orleans. Here, she met with her attorney, Kevin O'Bryon (L'81), and Palmer to present the volume to Tulane.  Swadling attended the evening's reception and looked through the book once again.

The book will be housed among the law school's rare book collection.

The law school’s ties to the volume go back decades. Scalise outlined some of the history. In 1938, Pierre de la Vergne (Louis’ uncle) told law Professor Ferdinand Stone that his family had the volume with Moreau Lislet’s personal notes.

In 1941, Professor Mitchell Franklin published an article making the world aware that the de la Vergne family had “an unpublished manuscript in which Moreau Lislet gave, in detail, the exact sources for  the various articles of the Louisiana Civil Code of 1808.”

By the mid-60s, the volume created a roaring debate between two academics, Louisiana State University Professor Robert Pascal and Tulane Law Professor Rodolfo Batiza.  Pascal argued the volume really reflected a digest of Spanish law in force in Louisiana in 1808; however, it may have looked to be French.

Batiza responded with meticulous research; he undertook an extensive study of the manuscript, showing the majority of provisions had been taken directly from French law, as compared with the  relatively few taken from Spanish sources. The debate raged throughout the 70s, and to this day remains a source of disagreement among scholars.

In 2003, Palmer studied the volume and concluded that some 30 percent of the articles are left blank and have no reference in the manuscript.  But once researched, most could be traced back to French law.

It is a marvelous debate, and fitting that the de la Vergne came home, said Scalise.

“Scholars from Tulane Law School have been at the forefront of research on the de la Vergne manuscript and at the center of the debate from the very beginning,” said Scalise, a civil law scholar and expert. “The gift of the de la Vergne volume to Tulane helps ensure that that tradition and continued research on this important work will continue for many years to come.”