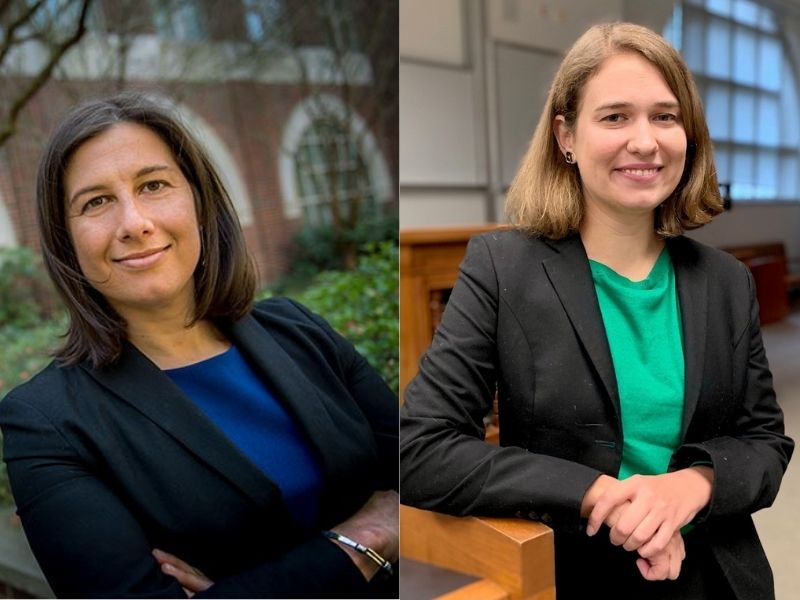 Profs. Laila Hlass (left) and Mary Yanik (right), co-directors of the Tulane Immigrant Rights Clinic, have been named Bellows Scholars, a prestigious and highly-competitive program of the American Association of Law Schools, for their innovative research into Louisiana's detention crisis.

Profs. Laila Hlass and Mary Yanik, co-Directors of the new Immigrant Rights Clinic, were recognized along with six other professors as Bellow Scholars for the 2021-22 year. The highly-competitive award comes with recognition and support of scholarly research “that improves the quality of justice in communities, enhances the delivery of legal services, and promotes economic and social justice,” according to the AALS announcement.

Hlass and Yanik’s research project is titled Habeas Litigation and the Louisiana Immigrant Detention Crisis, which examines 499 federal court cases challenging the legality of immigration detention in Louisiana over the past decade. The federal cases, all habeas corpus petitions, are the last resort for immigrants who have been detained for months or even years, often without the chance for an individualized hearing on release. Every long-term Louisiana immigration detention center is located within the Western District of Louisiana, where immigration attorneys are litigating the legality of prolonged detention more frequently in recent years.

Hlass is the law school’s Director of Experiential Learning and co-directs the Immigrant Rights Clinic with Yanik. Hlass’s teaching and scholarship focus on law, policy and practices that affect access to justice within the immigration law regime for particularly vulnerable communities including children, detainees, asylum-seekers, and survivors of violence, as well as emerging pedagogy and practices in experiential learning. She previously served as Director of Boston University’s Immigrants Rights Clinic.

Yanik arrived at Tulane Law this year to launch the Immigrant Rights Clinic after teaching an immigration practicum course as an adjunct. She formerly worked at the New Orleans Workers’ Center for Racial Justice, where she represented dozens of clients seeking U-visas because of workplace abuse, in addition to representing immigrants and guest workers in complaints before the federal labor agencies. Yanik also served as local and trial counsel in federal litigation challenging the constitutionality of Louisiana’s anti-immigrant marriage license law and of prolonged immigration detention in Louisiana.

Hlass and Yanik join leading academics from Harvard Law and Miami School of Law, among others, as new Bellow Scholars who submitted pioneering research examining a broad range of legal, interdisciplinary topics.  Works chosen for consideration become the focus of sharing, discussion and critique by the AALS clinical conference members. To be chosen, works generally show detailed empirical analysis, connect research to advocacy and involve “substantial collaboration between law and other academic principles,” according to the AALS.

• Kele Stewart (University of Miami School of Law), Reimagining Communities that are Overpoliced by the Child Welfare System