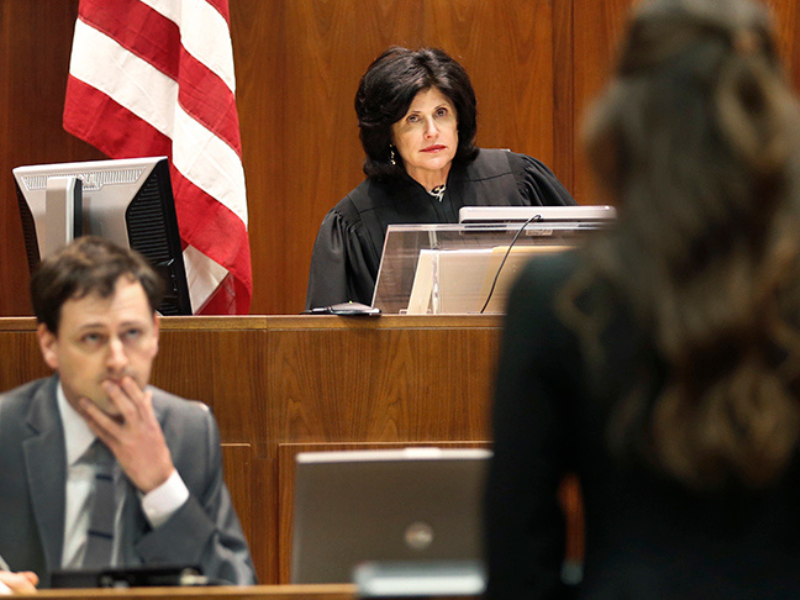 Tulane Law alumna Judge Sarah Vance (L’78), who serves in the U.S. District Court for the Eastern District of Louisiana, has joined an elite group of federal judges who have received the nation’s highest honor bestowed on a member of the federal judiciary.

Vance is the 2022 recipient of the Edward J. Devitt Distinguished Service to Justice Award, the nation’s highest award for a sitting federal judge, an honor announced recently by U.S. Supreme Court Justice Brett Kavanaugh and the Dwight Opperman Foundation. The Award was formally presented during a dinner in October at the U.S. Supreme Court by Chief Justice John Roberts.

The Devitt Award has been presented annually for more than four decades “to bestow a high honor to an Article III federal judge for distinguished and exceptional service.”  The honoree is selected by a three-judge committee including a Supreme Court Justice, a Circuit Judge, and a District Judge and is considered “the most prestigious award to be bestowed upon an Article III federal judge.”

"I am overwhelmed at the thought of joining the pantheon of judges who have received the Devitt Award. My heartfelt thanks go to Justice Kavanaugh and the Devitt Award Committee for choosing me for this singular honor," Judge Vance said in a statement. "My entire judicial career has been a happy collaboration with my law clerks and staff, and the many dedicated judges and staff members who worked beside me in the Eastern District of Louisiana. The Devitt Award is the capstone of a judicial career that has already been highly rewarding. The news that I would receive it leaves me elated and immensely grateful that I have had the opportunity to serve as a federal judge."

Past honorees of the award include Tulane alumnus Judge John Minor Wisdom (L ’29) and a host of other legendary jurists.

“Judge Vance is a model of excellence on the bench – learned, razor smart, open-minded, and scrupulously fair,” said Dean David Meyer.  “This honor is richly deserved and I am very proud for Tulane Law.”

During the ceremonies at the Supreme Court, Judge Vance was joined by her family,  former law clerks Chloe Chetta (L’ 15) and Judge Patricia Campbell-Smith (L’92) and many supporters and friends.

Vance has been a dedicated Tulanian most of her life. She is an adjunct professor at of law, teaching alternative dispute resolution and civil procedure; Vance also is a longtime member of the Law School Dean’s Advisory Board and a member of the  Tulane Law Review’s Board of Advisory Editors.  In 2017, she was inducted into the Tulane Law School Hall of Fame. In 2018, she served on the judicial panel that decided the Law School's Honorary Round.

In her career, she has been a trailblazer and gifted lawyer. The daughter of schoolteachers who was raised in Donaldsonville, La., Vance has been described by colleagues as a standout jurist for her ability, intellect, and disposition on the bench. She graduated first in her class at Louisiana State University, where she majored in political science, and again at Tulane Law, where she was managing editor of the Tulane Law Review and graduated Order of the Coif.

After graduation from Tulane, she joined the New Orleans firm of Stone, Pigman, Walther, Wittmann, & Hutchinson, where her practice focused on commercial litigation and white-collar criminal defense. There, she worked extensively on antitrust cases, including winning a $175 million settlement in a major multidistrict antitrust ligation involving price fixing in marine construction. In 2014, she made history, becoming the first woman to chair the powerful U.S. Judicial Panel on Multidistrict Litigation.

President Bill Clinton nominated Vance to the federal bench in 1994, and since then she has managed thousands of cases and issued an equal number of opinions.  She was among a group of federal judges who, days after Hurricane Katrina devastated New Orleans and southeast Louisiana, set up offices in Baton Rouge to manage the hurricane-related cases that flooded the Eastern District. She became the Chief Judge of the Eastern District in 2008 and served in that role until 2015.

Vance  from 1997 to 2003 served on the Judicial Conference’s Committee on Administration of the Bankruptcy System and has been a member of the Fifth Circuit’s Judicial Council and the Fifth Circuit’s Civil Pattern Jury Instructions Committee. From 2003 until 2007, she served on the board of directors of the Federal Judicial Center and chaired the Judicial Education Committee for two years. She has been a member of the U.S. Judicial Panel on Multidistrict Litigation from 2013-2019, serving as its chair from 2014-19.

She was elected to the American Law Institute in 1996, and has served on its governing Council since 2013.