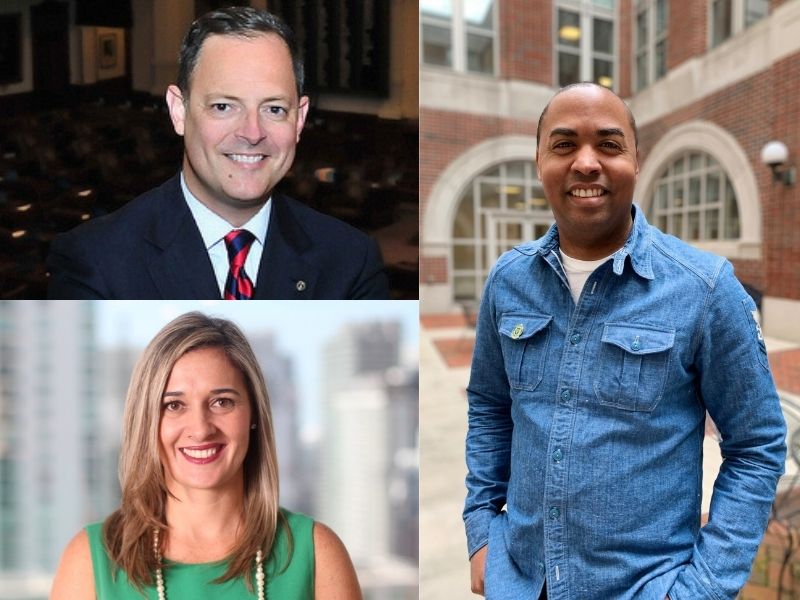 Their careers span a variety of legal areas: real estate, politics and the military. Each brings a wealth of experience to the Board at a time when the law school is navigating a pandemic amid social unrest, seeking to strengthen the ranks of its diverse and distinguished faculty, and looking to build more robust academic programming.

Congressman Cedric Richmond (L ’98), former chair of the Congressional Black Caucus, also joined the Dean’s Advisory Board in 2020, but had to resign from all board memberships upon his appointment as a senior White House advisor to newly elected President Biden.

“The board provides critical advice and support in helping the Law School achieve its strategic objectives,” said Dean David Meyer.  “We are extremely fortunate to gain the experience and perspective of these extraordinarily accomplished alumni.”

“Each of them has already been instrumental in shaping the Law School and I am grateful to them for taking on this important leadership role,” he added.

In addition to these new members, the advisory board is made up of several dozen other practitioners from a diverse cross-section of law firm leaders, judges, general counsel, the bar, and public service. Board members have played important roles in many innovations at the law school, including Tulane’s distinctive lawyering skills boot camp and an expansion of the school’s transactional skills curriculum, among others.

Anchia is an eight-term Texas state legislator who has risen to significant leadership roles in the Democratic minority and served on the Energy Resources Committee, House Administration Committee, International Relations and Economic Development Committee (Chair), and the Texas Privacy Protection Advisory Council Committee.  He was also elected by his peers to chair the Mexican American Legislative Caucus (MALC), the oldest and largest Latino caucus in the United States.

Before his election to the House of Representatives in 2004, Anchia was elected as the District 7 trustee of the Dallas Independent School District, the nation’s 12th largest. During his tenure, he helped lead the successful effort of the Dallas schools to win public approval of a $1.37 billion school bond package. The district progressed from having 2,000 teacher vacancies to none for the first time in 20 years.

De las Cuevas-Diaz is a partner in Holland & Knight’s Miami office and serves as the deputy section leader of the Real Estate Section.

Her legal work focuses on representing developers in a range of projects, including land development, multifamily, condominium, office and single-family development and hotels. She also handles financing for these types of developments, including institutions and mezzanine financing, public representation of complex real estate transactions, as well as government relations.

De las Cuevas-Diaz also focuses on joint venture negotiations for these transactions at all levels. She guides institutional lenders toward resolutions for troubled loans and complex workouts. She is called on to assist clients in developing solutions for complex real estate transactions.

She was named a “Florida Legal Elite Up & Comer” in Florida Trend magazine for four years in a row, and as a “Hispanic Women of Distinction” in 2008. She was listed in the Legal 500 USA in 2017, the Miami Herald “20 under 40”, the South Florida Business Journal “40 under 40,” and named as Law & Politics magazine’s “Florida Super Lawyer.”

Before earning her JD at Tulane Law, she attended Florida State University where she received a bachelor of science degree.

Waldrup is a U.S. Air Force Captain who serves in the JAG Corps as Circuit Trial Counsel for the U.S. Air Force, at Joint Base San Antonio. In that role he is a prosecutor, called upon to try complex cases – murders, rapes, sex assaults, drug cases – all over the globe. In his role, he also mentors junior counsel.

Waldrup is a strong and vocal proponent of mentorships and giving back. As he headed for graduation from law school in 2016, he and classmate Gary Crosby (L’16) decided to create an endowed scholarship for minority students to remove financial barriers for those who don’t come from traditional lawyering families. The Waldrup-Crosby Endowed Law Scholarship combines financial assistance with robust mentoring networks that will help these students to break into elite opportunities in the legal profession.

Before receiving his JD at Tulane (where he was managing editor of the Tulane Law Review), Waldrup was a military meteorologist. He received a Bachelor of Science degree in meteorology from North Carolina State University, and a Master of Education, Educational Leadership, Northern Arizona University.