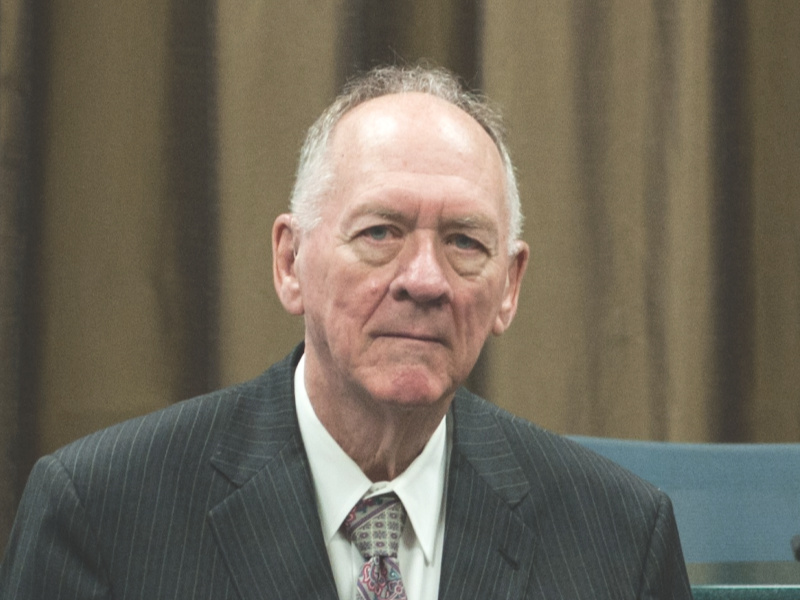 Prof. Emeritus Hoffman Franklin Fuller died April 6, leaving his mark on generations of students and colleagues as a respected tax scholar and a beloved professor.

Hoffman Franklin Fuller graduated Tulane Law in 1956, setting academic records that lasted for decades. However, he could not stay away for long.

Four years later, “Hoff,” as he was known to family, friends and colleagues, joined the law school faculty, building a premiere tax program nationally and chairing the Tulane Tax Institute for almost 50 years until retiring in 2007 as Professor Emeritus.

Fuller died April 6 at the age of 88, leaving his mark on generations of students and colleagues as a respected tax scholar and a beloved professor.

“When Hoff was inducted into the Tulane Law School Hall of Fame in 2015, most of the nearly 300 alumni in the room rose to identify themselves as his former students before giving him a standing ovation,” said Law Dean David Meyer. “He was widely respected and loved as an outstanding classroom teacher and faculty leader.”

Indeed, Fuller’s impact on previous generations led to several alums creating the Hoffman F. Fuller Professorship in Tax Law in 2014. Among them were Bernie Pistillo (L’81), the estate of Harold Judell (L’50) and an anonymous donor.

At the time, Fuller was characteristically humble about the honor. “I feel a great deal of pleasure, and I feel honored at this being created in my name,” he said.

The inaugural professorship went to then-Associate Professor Shu-Yi Oei (now at Boston College of Law), who founded the Tulane Tax Roundtable, an annual gathering of tax scholars from around the country. Prof. Khrista McCarden now holds the professorship.

“He was so compassionate and approachable,” said Pistillo, who credits Fuller with his career as a tax lawyer. “He taught a very difficult subject, and one that was not intuitive, but he did his best to convey difficult material in a way that was engaging and fun.”

Because of Fuller, Pistillo took a summer associate’s position in tax law while in law school. He liked it so much, he said, he decided that was what he wanted to do. The next year, he piled on four more tax classes into his schedule, including international tax law and corporate law.

“In class, he always wanted to discuss these problems together, especially those that were not covered by existing law. From that I learned about tax law the right way, that it was difficult but that you could be really creative in solving unique problems. That appealed to me,” said Pistillo, now a partner at Morrison & Foerster in San Francisco.

“Without Prof. Fuller not only would I not have tried any tax assignment, but I never would have had a career in tax law, and a career that I can say without question, that I love.”

Fuller arrived at Tulane from humble beginnings. He was a native of rural Louisiana, born in Bossier City, the son of a four-term mayor of the town and the city’s sixth since it incorporated. He graduated valedictorian of Bossier High School, and continued that trend in excellence, finishing first in his class at both Vanderbilt University and Tulane Law School, where he was a member of the Order of the Coif.

After law school, he served as a Judge Advocate General for the U.S. Air Force, before returning to Tulane to teach and head the Tulane Tax Institute, helping grow it into a top program in the field nationally. He became the law school’s associate dean for Academic Affairs from 1972 to 1977.

His impact on the faculty and academics were significant. And so were his kindness, gentle wisdom and welcoming nature, fondly remembered by colleagues.

Prof. Oliver Houck, who was a junior member of the faculty under Fuller’s tutelage, and is now a renowned environmental law scholar, recalled Fuller as “the ultimate gentleman. In a calm, southern voice he set the tone at faculty meetings, rarely speaking first but interjecting a word here and there, almost as an abstraction (‘I do not think it would be wise …’) that made his position courteously, but quite clear,” Houck remembered. “For someone like me coming from the hustle of practice of D.C. and knowing of law faculties only the conflicts at places like Harvard, I found this style a revelation. It was certainly a factor in my decision to stay here.”

Prof. Joel Friedman echoed Houck, adding that Fuller brought the faculty together during the most difficult of times. “He was a mentor and great friend to me from the time I joined this faculty, which was far from an easy or desirable task. Close friends, like me, called him Franklin (his middle name) and I will be thinking of him fondly today.”

Prof. David Katner, the director of Tulane’s Juvenile Law Clinic, said Fuller was “first my professor, then my colleague, and then my friend.” Fuller had an almost photographic memory, Katner said, recalling how his friend once recounted the exact route he had driven on the streets of Portugal with his wife in order to enjoy a fine octopus dinner.

“I went back to my office, looked up the street maps, and every turn, street and location was exactly as he recalled. His trip had been made 25 years earlier,” Katner said.

He had a passion for opera, and he and Katner would debate the merits of a variety of sound equipment. “I was partial to Bose speakers while Hoff felt the upper ranges were good, but the base had too much distortion,” Katner recalled. “We would share locations and people to speak with about sound systems. He was a great teacher, a better colleague, and a generous friend. He was the voice of reason at our faculty meetings. He was also the best storyteller I've ever known. He will be missed.”

One of Fuller’s most significant scholarly contributions, in addition to the many articles written for legal publications, was a textbook he co-authored with Harry H. Halden in 1967, “Federal Taxation: Text and Cases.” His research largely focused on the role of tax avoidance laws and regulations. He was a visiting lecturer at Chuo University in Tokyo and a visiting fellow at Fitzwilliam College of Cambridge University in England.

When he was inducted into the 2015 Tulane Law Hall of Fame, hundreds of former students attended, gave him a standing ovation, and honored him as an educator and a foremost expert on tax law.