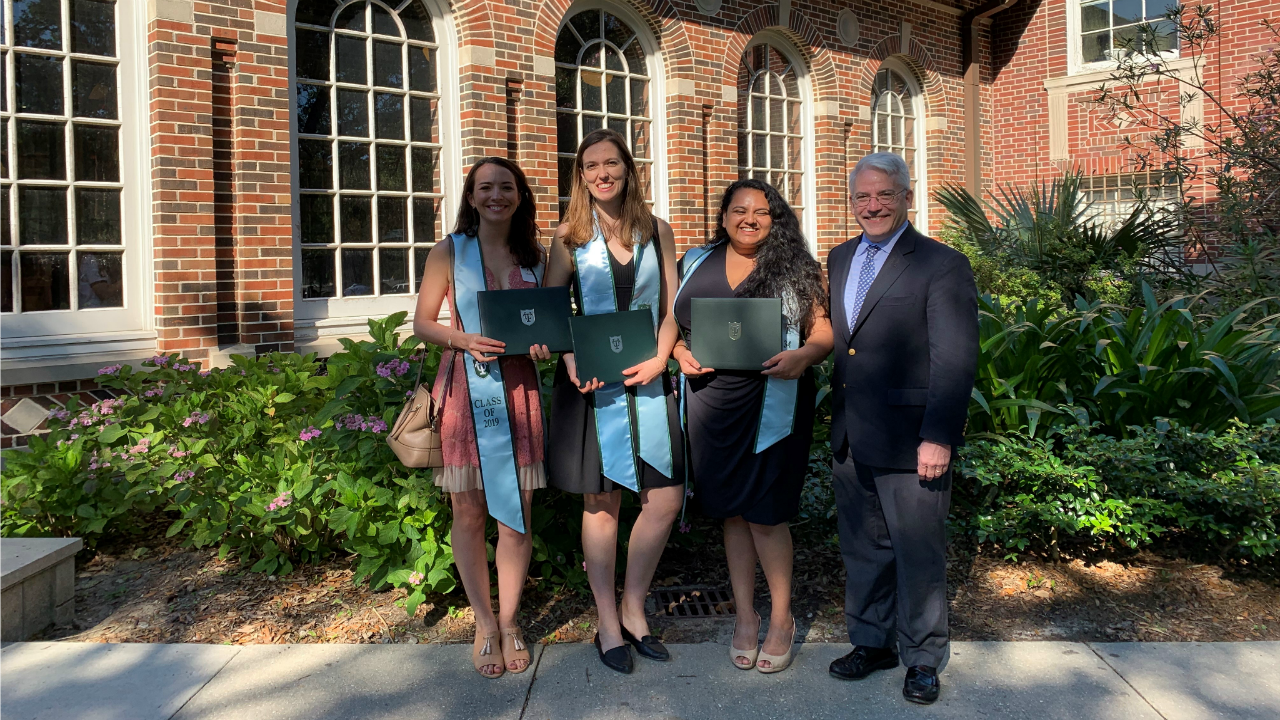 Three Tulane Law students were among the recipients of one of the univeristy’s highest student honors, the Tulane 34 Award.

Anais Moore-Jaccard, Erin Marie Morrissey and Radha Venkata Padma Yerramilli, were recognized Thursday, May 17 for their exemplary leadership, service and academic excellence in receiving the award.

The award, named for the year in which the university was founded, 1834, is presented annually to 34 graduates universitywide by the Division of Student Affairs who have distinguished themselves throughout their collegiate life.

“We are so proud of the exceptional achievements of these three students,” said Law School Dean David Meyer, in presenting the awards. “We look forward to celebrating their future successes.”

Jaccard is Editor in Chief of the Tulane Law Review and has worked closely with students, faculty and scholars during her time at Tulane. While publishing five editions and guiding 50 students on the Review, her work also was selected for publication. She collaborated with Professor Amy Gajda to solicit articles from prominent media and privacy law scholars in conjunction with the Privacy, News, and Future Freedom of the Press conference held at Tulane in the fall. Additionally, she has worked with the Louisiana Bar Association and various non-profit legal services organizations to learn about public interest leadership, and used her interest in environmental law to help coordinate the 23 annual Tulane Environmental Law & Policy Summit.  Jaccard has been an academic tutor, and currently serves as a Senior Fellow to the Legal Research and Writing Program, assisting the faculty develop writing assignments, draft sample answers, and guide first-year students in the development of critical legal research and writing skills.

Graduating first in her class, Morrissey has maintained an exemplary academic record while serving as a student leader and giving back to the law school community. As President of Tulane Law Women in her second year, she coordinated numerous programs focusing on the experience of women in the law.  These successful events exposed law students to practitioners in a variety of fields, provided students with networking opportunities, and offered strategies for addressing some of the unique challenges women face in the legal profession.

Morrissey’s received CALI Excellence for the Future Awards, given to the student with the highest grade in each course, in Torts, Common Law Property,  Evidence and Constitutional Law: First Amendment. She has served as the Diversity Editor and Managing Editor for the Tulane Law Review, and she was the recipient of the Gertler Law Review Award for Best Case Note, Vol. 92.  In addition, Morrissey has contributed to the law school community by serving as a mentor, and is a Senior Fellow to the Legal Research and Writing Program, assisting the faculty develop writing assignments and guide first-­year students in the development of critical legal research and writing skills.

After graduation, Morrissey will work as an associate at BakerHostetler in Atlanta, Georgia.

Yerramilli came to Tulane Law School with the overarching goal of learning the requisite skills to use the law to empower, and the values of empowerment and autonomy have gu ided her work throughout her time here. As a first year student, she was selected to serve as a clerk for the Tulane Legal Assistance Program (TULAP), where she assisted the staff attorneys on several family law matters . She secured a PILF grant to clerk for the NO/ AIDS Task Force, drafting EEOC complaint letters, public benefits litigation, and securing legal name changes for transgender clients living with HIV/AIDS. She worked for the National Center for Lesbian Rights as the Edwin C. Baker Clerk, a position in which she worked on LGBTQ appellate matters, public accommodation discrimination, family law, progressive family planning, and transgender youth advocacy. In her final year, she was a student attorney in the Tulane Domestic Violence Clinic, where she has provided comprehensive legal services to survivors of domestic violence.

Yerramilli argued on to the Moot Court's Alternative Dispute Resolution Team and has had a successful career as law school negotiation and mediation competitor. She was the 2L lntraschool Negotiation Champion, and later competed in the 2018 International Alternative Dispute Resolution competition were she won two first places.  She also was on a second place mediation team for the INADR 2019 United States Invitational.  She was elected to serve as the 2018-2019 Chief Justice for the Moot Court program, and during her tenure incorporated sexual harassment training and implicit bias training, to ensure that the Moot Court Program is a place of safety and that students are comfortable enough to compete at the highest caliber.