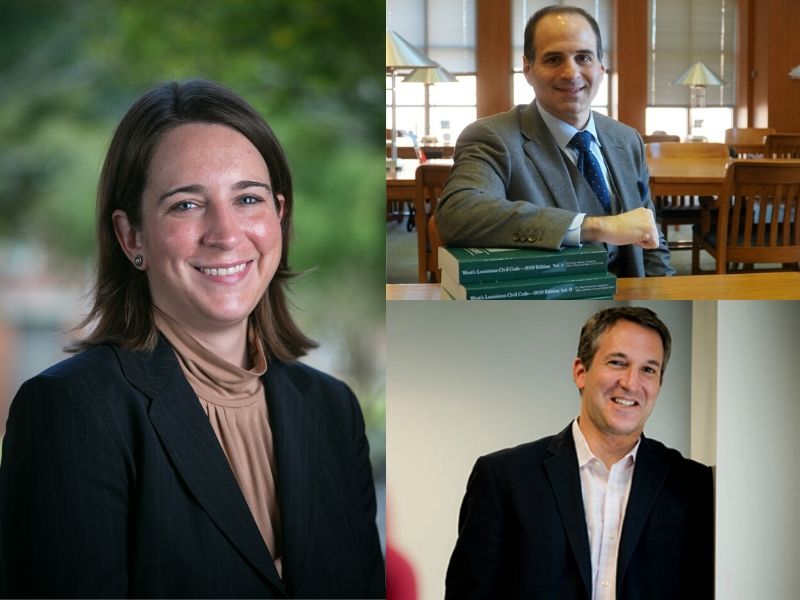 Clockwise: Profs. Sally Richardson, Ron Scalise and Gabriel Feldman. The three have been named Reporters of Committees for the Uniform Law Commission, an organization that helps create consistent legislation across the nation.

Three Tulane Law professors have been named Reporters of Committees for the Uniform Law Commission, an organization that aims to provide consistent, clear laws across state lines.

Feldman is the Reporter for the ULC Study on College Athlete Name, Image, and Likeness Issues; Richardson was recently appointed as a Reporter for the Uniform Law Commission Study Committee on Tenancy in Common Ownership Default Rules; and Scalise was named Reporter of the Committee for the Disposition of Community Property Rights at Death Committee.

The Reporter for a ULC Committee serves as the leader of the Committee, directing the substantive work the Committee undertakes.  They are considered national leading experts in legislative reforms and updates on pressing legal issues. Most of the ULC members are attorneys doing the critical work to research, study and draw information from other professionals before offering recommendations. Those guidelines are then used to establish a common, comprehensive set of laws for communities to follow as they deal with multi-state issues.

The ULC’s purpose is to strengthen the federal system by providing rules and procedures that are consistent from state to state but that also reflect the diverse experience of the states, keep state law up-to-date by addressing important and timely legal issues, and help people do business across state lines without dealing with an ever-changing set of statutes, among other things.

Feldman, a sports law expert, is a member of the ULC’s Committee on College Athlete Name, Image, and Likeness Issues, which will address the need of states' legislation to protect young athletes and examine how they might compensated for their work, image and promotions on behalf of college teams.

Richardson’s Study Committee on Tenancy in Common Ownerships Default Rules, is exploring whether a uniform law should be drafted for managing the rights of tenants in common—or more commonly referred to as co-owners.