Tulane A-Z
Home / Tulane 34: Leading through the pandemic, they made Tulane Law better

Tulane 34: Leading through the pandemic, they made Tulane Law better 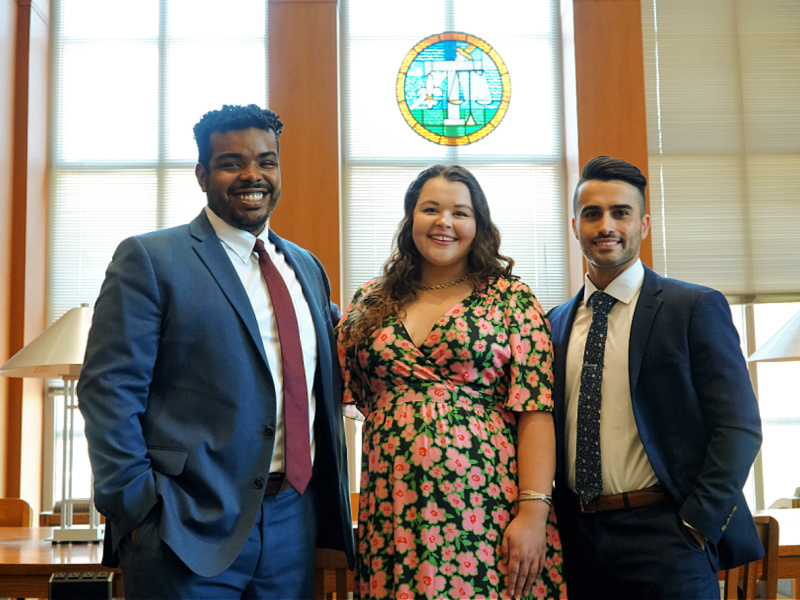 (L-R) Antonio Milton, Meredith Clement and Sergio Ingato have received the Tulane 34 Award, one of the highest student honors at Tulane University.

They are leaders, mentors and scholars who have received one of Tulane University’s highest honors.

For their commitment to others, dedication to academic achievement and contributions to Tulane Law School, third-year law students Meredith Clement, Sergio Ingato and Antonio Milton have received the Tulane 34 Award.

Named for the year 1834 when the university was founded, Tulane 34 is among the most coveted university-wide honors that a graduate can receive. Every year, the Tulane 34 Award is presented to 34 graduates who have distinguished themselves throughout their collegiate life at Tulane. Students can come from any school at Tulane and are recognized for their exemplary leadership, service and academic excellence. 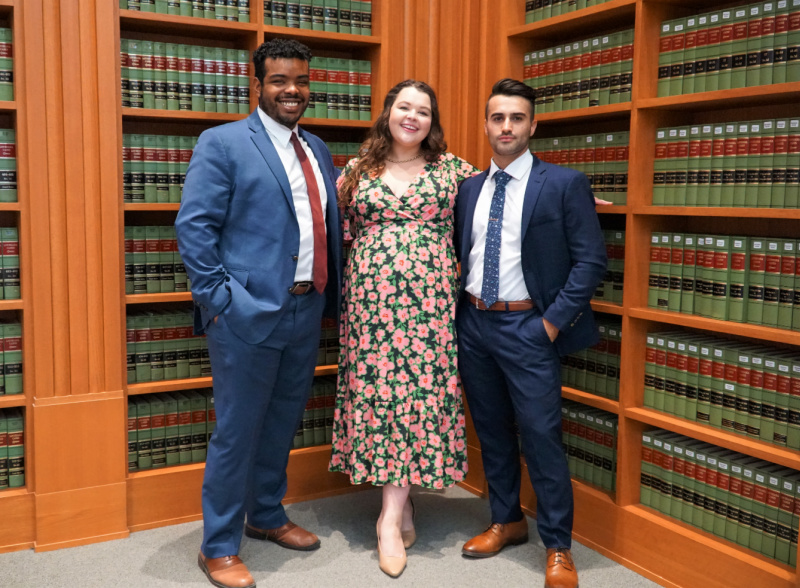 Clement, Ingato and Milton all gave back tirelessly during the three years they studied law. Clement led the Moot Court Program, while Ingato was a student leader in the Student Bar Association. Milton made history as the first Black editor-in-chief of the Tulane Law Review in its more than 100-year existence.

Clement, from New Orleans, made the most of her time at Tulane Law.  In her first year, she forged connections with her classmates as an active member of the Civil Law Society and Tulane Women in Law. She deepened her connection with and commitment to the law school by serving on the Library Committee alongside faculty members and fellow students. At the end of her first year, she argued on to the Tulane Law Moot Court Program Mock Trial Team, not realizing then that it would be the most meaningful experience of her law school career. Despite the pandemic forcing much of the law school experience online, she went on to compete in virtual national trial competitions, all from the safety of Weinmann Hall, while diving deeper into the TLS community.

In her second year, she competed in the Intraschool Mock Trial Competition and earned the title of 2L Champion. She also joined the executive board of the Civil Law Society so that she could contribute to the organization that honored the rich and unique legal system of her home state. Clement also honed her research and writing skills by serving as Professor Laura Lane-Steele’s research assistant. In the Spring of 2021, she was elected to the leadership position of Chief Justice of the Tulane Law Moot Court Program, leading efforts to support the program’s momentum in trying times.

In that role, she has collaborated with the administration and committed Tulane alumni to provide meaningful experiences for members of the program and the law school at large. Under her leadership, Moot Court hosted oral advocacy competitions for law students and Moot Court teams nationwide. In the Fall of 2021, she also took her oath as a student attorney in the Tulane Domestic Violence Clinic and has since served her clients while gaining invaluable legal experience, including successfully representing a client in an appeal before the Louisiana Fourth Circuit.

In addition to successes in academic and student organizations, Clement has explored the practice of law through summer associateships at local law firms as well as an externship with a federal Magistrate Judge Janis van Meerveld.  She has also formed connections in the New Orleans community by volunteering with the Dillard University Mock Trial Program.

After graduation, she will serve as a law clerk to the Hon. Donna Currault at the U.S. District Court for the Eastern District of Louisiana for the 2022-2024 term. Following the clerkship, she plans to practice civil litigation.

Coming from California, Ingato arrived at Tulane Law to join the accelerated JD/MBA program. During his time at Tulane Law, he not once shied away from responsibility or leadership. As a 1L, he quickly earned the respect of his peers and was elected 1L Class President for the Student Bar Association (SBA). He went on to be elected Executive Vice President during his second year of law school and is now the current Executive President of the SBA. In the past three years, Ingato has helped organize numerous events aimed at bringing the Tulane Law School community closer together, despite the trials of the COVID-19 pandemic. From introducing a Tulane Law Student Pelican’s game night, to merchandise creation, hosting numerous hurricane relief drives, Ingato has been a true student leader and helped the SBA exceed its potential.

While students may shirk added responsibility after the intense first year of law school, Ingato took on more. Last spring as a 2L, he was selected to serve as the head coach of Tulane Moot Court’s Alternative Dispute Resolution (ADR) team. Each week, Sergio taught junior ADR members how to negotiate and mediate disputes. He has led two teams to the ABA Negotiation Finals after both teams dominated the regional competition.

In addition to leading both SBA and ADR, Ingato also is a senior managing editor of the Tulane Journal of Law and Sexuality and an active member of OUTLaw, a student organization dedicated to serving the LGBTQ+ law student community. Ingato has also single-handedly planned and coordinated the Spring GAPSA Mixer for the benefit of all Tulane graduate students.

Ingato has not let his extra-curricular leadership commitments negatively affect his academic success. In the fall, he was inducted to Beta Gamma Sigma, an academic honor society for top business school students.

Ingato spent the summer after his first year back in the classroom, enrolled in his first semester of business school classes. He spent his 2L summer in Century City, Calif., as law clerk at DLA Piper in their Structured Finance group. During his time at Tulane, Ingato volunteered at the Orleans Civil District Court with the Pro Bono Project and externed with LCMC Health’s corporate legal department.

Upon graduation, he will be moving to Los Angeles, Calif., and working for DLA Piper in their Media, Sport and Entertainment group.

Milton was born and raised in Carencro, La., but he has proudly called New Orleans home since he came to Tulane for undergraduate study in 2016. In his time here, Milton has dedicated himself to serving both the Tulane community and the Greater New Orleans area. He was admitted to Tulane Law through the 3+3 Program, completing his first year of law school during his final year of undergraduate study.

In his first year at Tulane Law, Milton clerked at the Tulane University Legal Assistance Program (TULAP), a pro-bono clinic providing legal aid for members of the Tulane community. He also volunteered at a legal clinic for persons with prior convictions in need of representation on matters of landlord-tenant disputes and traffic violations.

In pursuit of academic excellence, Milton received two CALI Excellence for the Future Awards for attaining the highest grade in his Torts and Constitutional Law courses. During his second year at Tulane Law, he served as a Junior Member of the Tulane Law Review, as a Dean Rufus Harris Peer Fellow, as an Oralist for Tulane's Jeffrey G. Miller Environmental Appellate Moot Court Team, and as a tutor for the Academic Support Program. Milton also interned at the Public Defenders' Office of Louisiana's 15th Judicial District and conducted research to prepare appeals and requests for relief for persons convicted by non-unanimous jury verdicts.

Milton made Tulane Law history when he was selected by his peers as the first Black Editor in Chief of the Tulane Law Review, responsible for Volume 96 of the 106-year-old publication. In this position, he has led a group of 53 student editors in publishing legal scholarship in five print issues and online companion articles. He continues to mentor and support first-year students by serving as a Senior Fellow for the Legal Research and Writing program.