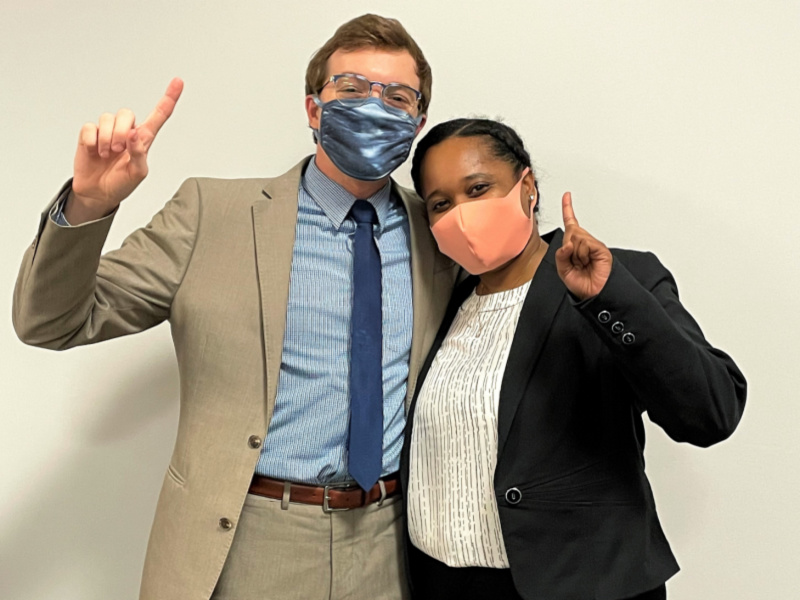 A very happy team of Dylan Farrow (L'22) and Jayde Encalade (L'21) after winning their division in the National Trial Competition. They head to the nationals in April. Encalade's role in the Moot Court program has been instrumental in a successful competition year.

There is something magical happening in the Moot Court Program – lots of winning going on.

Over the weekend, the Mock Trial Team – competing in a regional event against 25 others – took first place and is heading to the National Trial Competition finals against some of the best teams in the nation.

The team of 3L Jayde Encalade and 2L Dylan Farrow – making his Moot Court competition debut -- will head to the national competition in April after defeating the best teams in the South and Midwest regions. Encalade served as both coach and competitor.

“This win was well-deserved and hard-earned, and we are so proud of the work that all the competitors put in to support each other and represent Tulane on this national scale,” said Jen Siew (L’21), the Administrative Justice of Business Affairs of the program.

In all, two Tulane teams competed in the latest Mock Trial event, which fielded more than 140 teams across the nation, divided into districts. The first team made up of 2L's Meredith Clement, Catherine Grimm and Christopher Nunziato, were coached by Siew and Alyssa Shahrestani, both 3Ls. Encalade and Farrow comprised the second team.

Both teams faced many unforeseen challenges, and had to prepare, practice, and compete in a virtual format due to COVID-19 restrictions. “Both performed with the professionalism, integrity, and zealousness that embodies Tulane Law,” Siew said.

Encalade’s spectacular record this year as both coach and competitor cannot be understated.  Encalade coached a whopping eight teams in various competitions and took part as a competitor herself in the latest.

Prof. William Sommers, who coaches Mock Trial, called Encalade’s leadership one of the reasons for such a successful program year.

“As if Jayde didn’t have enough on her plate, she also somehow found time to actually participate successfully as a team member and advocate at a number of national trial competitions,” Sommers said. “Her work brought great honor and recognition to the school and the Moot Court program. She is proof that Tulane Law is indeed the ‘launchpad for leadership' in our profession.”

The team’s success is also attributable to the exceptional and tireless support of Sommers, who has coached Mock Trial for many years, and was instrumental in the team’s preparations and successes. In addition to his work with the Moot Court program, Sommers is an adjunct assistant professor in the Trial Advocacy program and is a faculty member for the civil litigation track of the annual Intersession boot camp.

“Our advocacy programs depend substantially on the skills and savvy of adjunct practitioners like Bill Sommers,” said Stacy Seicshnaydre, Associate Dean for Experiential Learning and Public Interest Programs. “Bill’s dedication to the Moot Court program over many years has paid dividends in a year of adversity like the current one; we are extremely grateful!”

The Mock Trial teams’ successes follow a growing list of accomplishments this year for the Moot Court program.