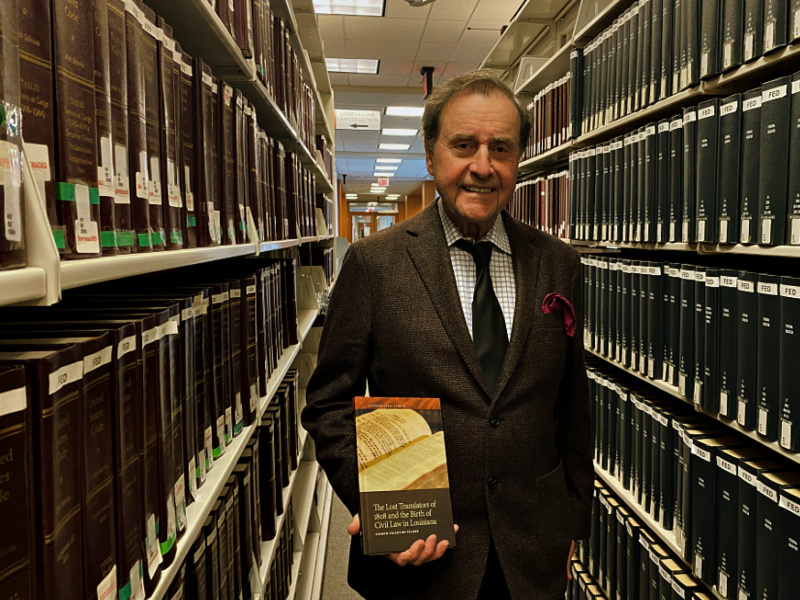 In his new book, The Lost Translators of 1808 and the Birth of Civil Law in Louisiana (Univ. Georgia Press 2021), Palmer (L’65) uncovers the true identity of the men  who wrote  the English translation of one of Louisiana’s founding documents.

“The book solves a fascinating mystery,” Palmer, a world-renowned expert in civil and comparative law, said recently. “These were people who were not particularly well-known, but they were well-connected.”

For the past two centuries historians and lawyers have searched in vain to learn who performed the English translation of the Digest of Orleans of 1808.  The French version of the Digest has been recognized as the first reception of the French Civil code outside of France, and important in establishing Louisiana’s legal foundations in civil law.

Palmer points out that the English translation also was an historic first, and second in impact perhaps only to the work of the codifiers. It was an unprecedented effort to codify civil law concepts and principles in the English language, and as the French language waned and all but disappeared in Louisiana, the translation became increasingly the principal means by which the civil law was expressed and understood.

True to Louisiana’s scandal-filled legal lore, Palmer follows the lives of the two men responsible for the English translation and reconstructs their turbulent lives and social milieu, together with surprising personal details that reflect on the quality of their work, including their questionable credentials.

Both were connected to powerful members of Louisiana’s political class, including Julien de Lallande Poydras and Edward Livingston. One was a lawyer, the other was a jack-of-all-trades.

“They simply appeared to have a knack for making connections,” Palmer said. “And those connections led them to the work of translation.”

The book opens new vistas in Louisiana legal history, first by linking the translation to the previous historiography of the Digest, and then by undertaking an extensive review of the strengths, flaws and unusual facets of the pioneering translation.

With the publication of this latest work, Palmer also is celebrating a milestone of his own. This year, he celebrates his 50th anniversary teaching at Tulane.

A New Orleans native, Palmer earned his undergraduate and his law degree at Tulane, and later received a master’s and Phd in law from Yale and Oxford universities, respectively.

Palmer arrived in 1970 from Indiana University where he had taught constitutional and civil law.

He recalled his first years teaching, where “I literally wrote everything down, I needed a script, I was so afraid to make a mistake,” he said.

There were also the stacks and stacks of books he would bring to class, “just in case anyone had a question,” he smiled.

Today, he’s far more comfortable in the classroom, a good thing on this, his 100th semester.

During his years at Tulane, Palmer, the Thomas Pickles Chair and Co-Director of the Eason-Weinmann Center for International and Comparative law, has specialized in comparative law and European and French civil law. Over the years, he did extensive work abroad in France, Germany, Spain, Italy, Switzerland, Japan and Africa.

Among his notable accolades: Paris-Dauphine University honored him as a Docteur en Droit Honoris Causa in 2013, and in 2006, French President Jacques Chirac knighted Palmer as a “chevalier” in the French Legion of Honor, the country’s highest civilian award for his efforts to build stronger ties between the United States and France.  Earlier in his career, Palmer received from the French Prime Minister the Palmes Académiques.

He has written more than 50 books and articles focusing on  his research in comparative law and legal history.