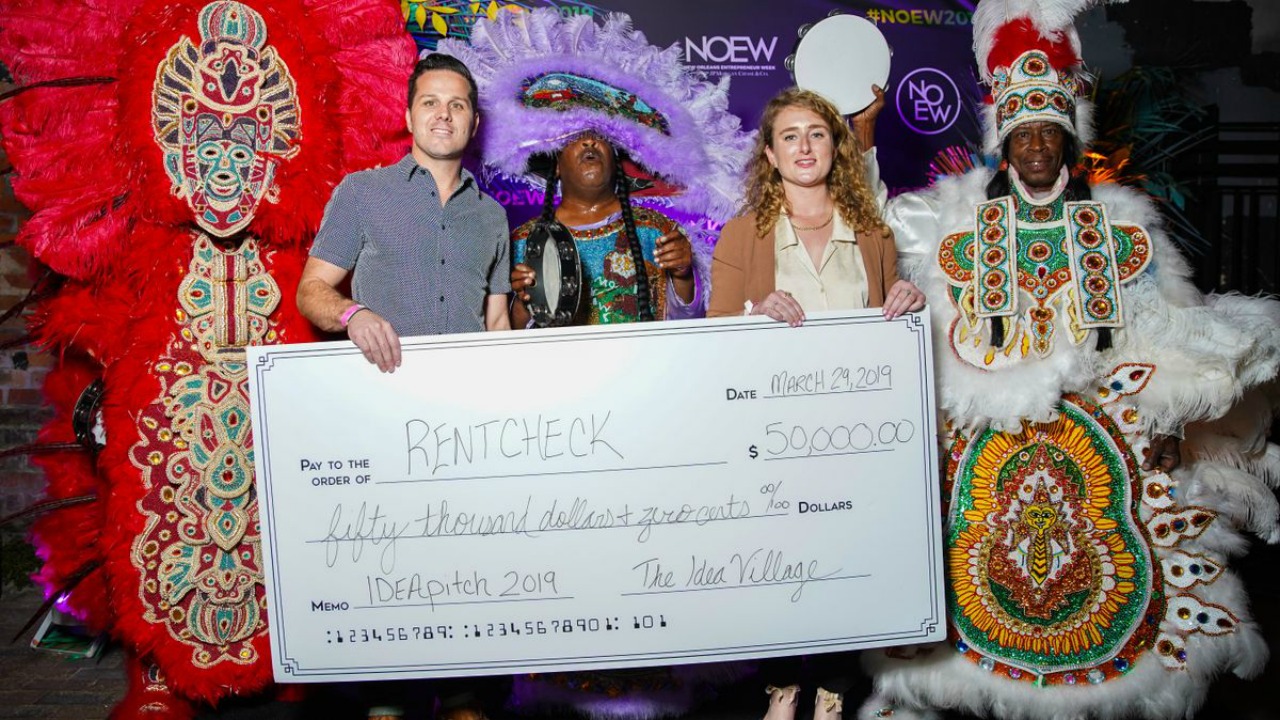 Marco Nelson, left, and Lydia Winkler, right, shortly after winning the top prize at the culmination of New Orleans Entrepreneur Week for RentCheck, the app they created to help landlords and tenants streamline the inspection process. (Photo courtesy NOEW)

What began as a battle by a first-year Tulane law student to get her rental deposit back from a prickly landlord is officially the hottest startup in New Orleans.

Lydia Winkler, a JD-MBA who graduates in May, and Marco Nelson, an A.B. Freeman School of Business MBA student, won the top prize at IDEAPitch, the culmination of New Orleans’ Entrepreneur Week, for RentCheck, the App they created to help landlords and tenants inspect properties before moving in – and avoid the moving-out battles.

The duo took home $50,000 in investment money, tips from the judges and the title of being one of the most promising startups to come out of this year’s week-long events, which this year was co-produced by the A.B. Freeman School of Business and The Idea Village.

Now in its 11th year, NOEW drew more than 2,000 to workshops, competitions, panels, network and generally support innovation and entrepreneurial thinking in the region. RentCheck competed against two other finalists and high-growth companies.

“The competition was a great experience and we look forward to growing our company in the great city of New Orleans,” said Winkler.

Among some of the tougher questions, the judges asked whether they believed RentCheck was solid enough to remain its own company rather than an add-on to another company, like a Zillow or Realtor.com.

According to The New Orleans Advocate, Winkler and Nelson “described a strategy to solve a laundry list of tenant-landlord problems, as well as to offer escrow account services, that could attract large property companies, banks and others as partners rather than competitors.”

Launched in March of 2018, RentCheck standardizes inspections with time-stamped photos and has been growing steadily to reach 40 states and seven countries.

“We launched a simple MVP product as quickly as we could to help protect renters, and without any marketing were able to see a steady flow of users. We quickly realized that almost half of our users were landlords and property managers. We have spent the last year learning from both customer segments and focusing on product market fit,” he said.

Winkler was motivated to create the app after having to sue her previous landlord who refused to return a $1,600 deposit after her first year of law school. It took her a year to get her deposit back but successfully represented herself in court.

Nelson owns properties and felt routinely frustrated by the lack of transparency with the condition of his rentals between move-in and move-out of tenants.  They met at the business school and talked about their rental gripes. Before long, he was designing the app, and she was selling it. The rest is … entrepreneurial history.

With more than 30 percent of renters moving each year, and 30 percent losing some or all their deposits, RentCheck solves that specific point in a market that turns over more than $12 billion in deposits each year. The judges were impressed with the size of the property management industry which is a $93 billion annual market.

Currently, the app is free but they plan on charging for their service in a few weeks as they roll out some updates. New Orleans was a perfect testing ground for the app, Winkler said, because of the number of college students needing rentals near the universities.  And, while studying both law and business, she was able to meet other young entrepreneurs.

“Tulane University has provided me with a landscape to innovate,” Winkler said. A perfect setting to meet my business partners.”

And that’s exactly with a legal education should do for students, said Law Dean David Meyer --  awaken their entrepreneurial spirit.

"We're very proud of Lydia’s ingenuity and initiative and the way in which she’s leveraged her legal education to bring her ideas to market,” Meyer said. “I have no doubt that RentCheck will be only the first of many more successful ventures to come.”

Winkler and Nelson are far from slowing down in the coming weeks: They were finalists in the Tulane Business Model Competition and are semifinalists in the New Venture Championships in Portland, Oregon in mid-April.

“Having the opportunity to compete in these competitions reminds me of when I played football at the Naval Academy, which is great because it makes you stay on top of your game,” Nelson said. Both Nelson and Winkler were college athletes.