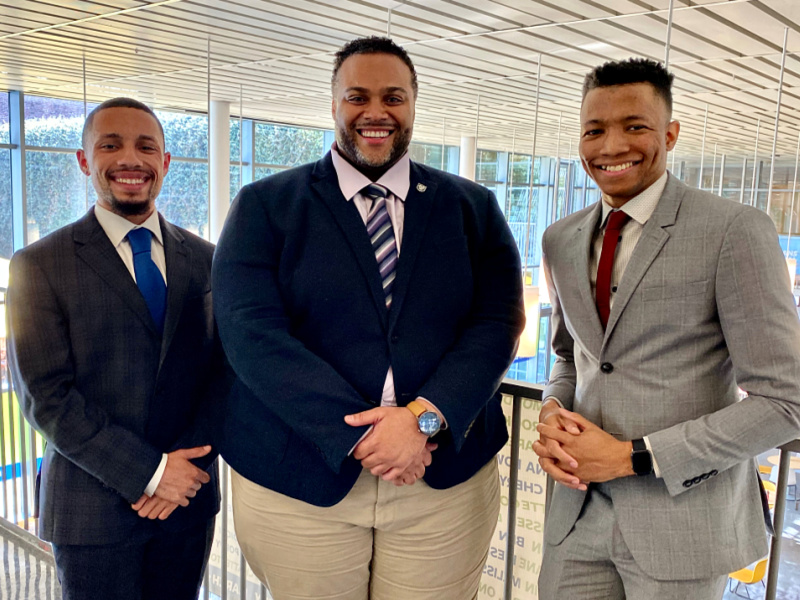 They have yet to lose a round in any moot court competition, but in a way, that’s how they planned it.

The two had been preparing like they would win.

“Our intention at the beginning of this journey was to win Best Brief, Best Oralist, and Best Overall Team,” said Roby, who studies sports law when he’s not competing. “We wanted to represent both Tulane and the Black Law Students Association with pride, and I hope that our goals were met.”

The Tulane Law BLSA Moot Court Program is just two years into its merger with the Tulane Moot Court Program. Since students began competing in the national BLSA competitions several years ago, they’ve consistently performed better year after year. Roby and Roy, with the help of their coach and a slew of moot court alumni, bested teams from Columbia, the University of Virginia, and Texas Law, among others, to take the top spot in the nation.

It helps that the two became best of friends in law school and wanted to compete at the highest level. In the national competition, they not only won, but also earned perfect scores in several rounds, with Roby winning Best Oralist in the competition. As a team, the duo took the Best Petitioner Brief AND best overall team -- so that's a check, check and check.

“Taking top honors in a national moot court competition as prestigious as the Thurgood Marshall Moot Court Competition requires extraordinary talent and an enormous amount of hard work,” said law Dean David Meyer.  “To claim the trifecta of honors for Best Brief, Best Oralist and Best Team Performance is a stunning achievement and we could not be more proud for Tulane.”

Roy, who is studying criminal law, said the team practiced well over 300 hours in preparation, which began in late October writing the brief, and included practicing oral arguments for both the respondent’s side and the petitioner’s side. They worked long hours, even on Christmas Eve when they FaceTimed and Zoomed with their team to make sure their brief was as tight as it could be.

“Whether it was late nights or early mornings, we did the best we could any time we took the stage,” Roy said. “All in all, it was worth it. Best in the country!”

In the first day of competition, they expected to compete in the afternoon, but instead, Domingue got a call that they were on first thing in the morning. The team had hoped to run through their arguments that morning, just a little bit, said Roy.

“Despite frantically setting up and missing out on an immense amount of time for one more review, we pitched an excellent argument and did the best we could,” Roy said. The judges agreed, and they won the argument that morning.

Both men say they’re grateful to Domingue who “never missed a practice, checked in constantly and never missed a round of competition,” said Roy.

“Michelle pushed me to the edge here and there, but it was because of this reinforcement that both Reagan and I were prepared for both ‘hot’ and ‘cold’ benches,” said Roby.

Behind Domingue was another team of supporters: Recent alums who stepped up to help, too, making sure the Roby and Roy’s arguments were polished. They included former competitors and Class of 2021 graduates Karli Wells, Shane Thomas, Andrea Ewalefo and Lucy Dieckhaus (who last year was the Appellate Honorary Round champion).

“I couldn’t have asked for a better partner and friend to compete with,” said Roby. “We have full intention of coaching next year and defending all three national titles.”

Other BLSA Moot Court teams also competed over the weekend and did exceptionally well. The International Negotiations Team took home third place honors in the Nelson Mandela International Negotiations Competition for the second year in a row.  Schuyler Corbin (L’22) and Kayla Williams (L’23) comprised the third-place team, and the other team made up of 2Ls Trendell Shorty and Ania Smith made a Quarterfinal appearance.

Finally, Desmond Sims (L’23) served as the National Director for the Constance Baker Motley Mock Trial Competition. He represented Tulane Law School with the poise and professionalism needed to plan and conduct a competition with a lean team scattered across the country. Volunteer judges and coaches complimented him profusely on his handling of any issues and the seamlessness of transitions between rounds.