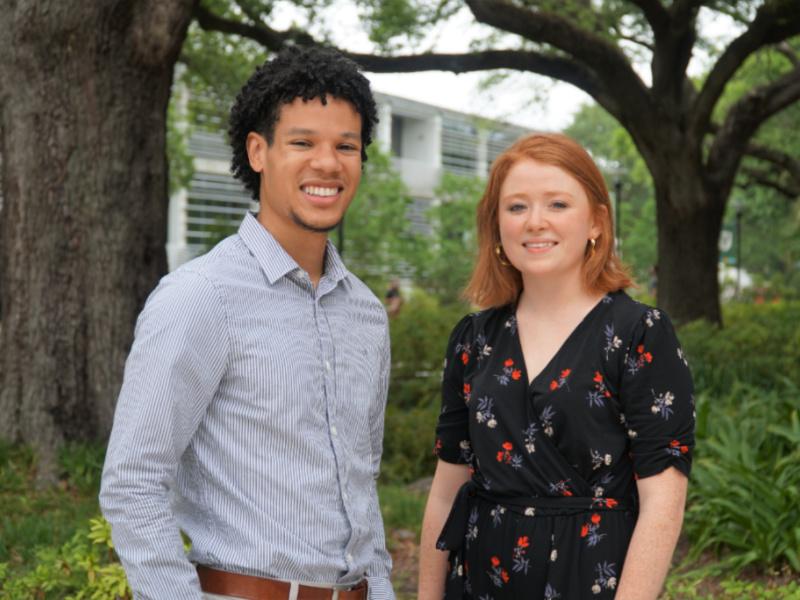 Second-year law students Schuyler Corbin and Sarah Crowley were selected from more than 700 applicants across the nation for the fellowship which provides funding and mentorship for students who have shown their desire to fight for workplace justice.

Corbin will be joining the Major League Baseball Players Association in New York, N.Y., while Crowley will join Segal Roitman, LLP in Boston, Mass. They are among 80 students chosen as Fellows nationwide.

“Securing a Peggy Browning Fellowship is not an easy task, with almost 700 applicants competing for the honor this year,” the Philadelphia-based organization announced, “Peggy Browning Fellows are distinguished students who have not only excelled in law school but who have also demonstrated their commitment to workers’ rights through their previous educational, work, volunteer and personal experiences.”

Corbin, who hails from Austin, Texas, has a business, technology, and sports background. He graduated with a BS in Business Administration from the University of Southern California and worked for IBM as a product manager in his hometown. He arrived at Tulane Law two years later, with a desire to work for the Black community in the sports and entertainment industry. He hopes to work within a sports agency, team or players association on athlete/worker advocacy, to champion diversity, equity and inclusion.

He is a past president of the law school’s Black Law Students Association and was recently elected Sports Law Society President.

Crowley is from a union family in Buffalo, N.Y. She graduated from University at Buffalo in 2018.

She is committed to workers’ rights; in the past year, she interned with a plaintiff-side employment firm in New Orleans, an experience that deepened her understanding of how dire working conditions are for many across all industries, particularly during the pandemic.

As an aspiring labor lawyer, Crowley plans to practice in worker-side labor and employment law and is interested in assisting with union organizing.

She is a member of Tulane ACLU and the Tulane Public Interest Law Foundation (PILF).

The Peggy Browning Fund is a not-for-profit organization established in memory of Margaret A. Browning, a prominent union-side attorney who was a member of the National Labor Relations Board (NLRB) from 1994 until 1997. Peggy Browning Fellowships provide law students with unique, diverse and challenging work experiences fighting for social and economic justice. These experiences encourage and inspire students to pursue careers in public interest labor law.