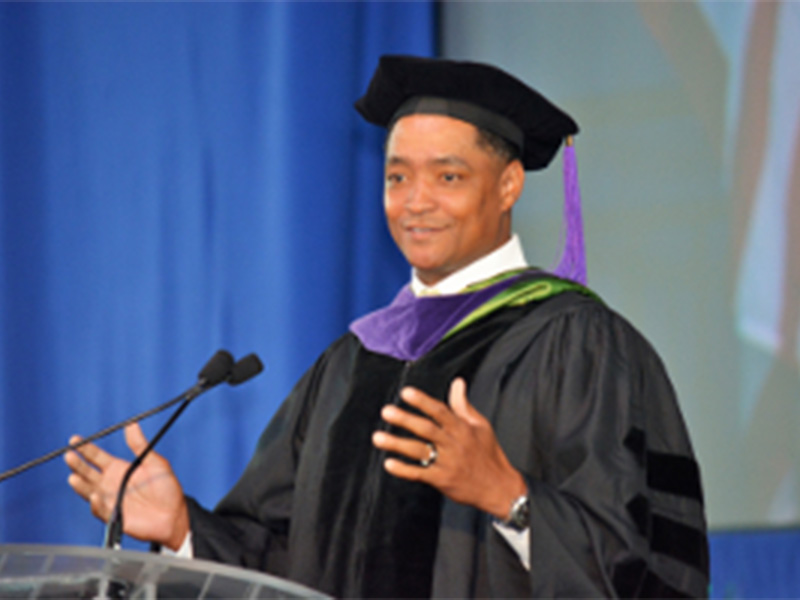 U.S. Rep Cedric Richmond (L ’98) called on Tulane Law graduates to “be the conscience of this great country.”

Richmond (L ’98) welcomed members of the Class of 2017 to “a noble profession” that carries great responsibility and a calling “to make this world a better place.” And he emphasized that Tulane produces graduates who “will be the conscience of this great country.”

“Conscientious attorneys are key to our government working,” said Richmond, who spent 11 years in the Louisiana Legislature and in 2010 was elected the U.S. House, where he chairs the Congressional Black Caucus.

He also called on those who go into advocacy to “resist that urge to win at all costs. You have to remember that the process is just as important as the outcome.”

The Class of 2017 set a fundraising record with its departing class gift devoted to scholarships, raising more than $14,000 with a 78 percent participation rate. The Dean’s Advisory Board pledged to add $14,500 to the gift.

Once they’ve taken the bar exam, graduates will be dispersing to firms large and small — in New Orleans, around the United States and even abroad. They’re also headed to judicial clerkships, government agencies and public defender offices. Some are taking their legal skills to non-traditional jobs to pursue their dreams.

Here are some examples of their next steps:

Onsi Saleh, who was born in Austin, Texas, but grew up playing basketball in hockey-loving Edmonton, Alberta, Canada, is scheduled to start with the NBA San Antonio Spurs front office in August. He’s the third consecutive graduate of the Tulane sports law program to land with the team. Saleh handled projects for the Spurs as an offsite intern in fall 2016 and got the post-graduation offer during final exams in May.

“A kid from a little town in Canada, and my dream was to be associated with the NBA in some way,” he said. “It’s really been surreal.”

Saleh said his legal education has prepared him for a highly competitive, detail-oriented industry that requires thinking on the spot. He also completed a research project that already has immersed him in the league’s new collective bargaining agreement that takes effect in July.

Judith Gronna adorned her graduation regalia with leis brought by her parents from Hawaii, her home.

Yen Mai, who grew up in Portland, plans to work as an assistant public defender in Miami-Dade County, Florida. “My father’s strength and my mother’s advocacy are my sources of inspiration as an advocate,” she said.

Mai said her father spent four years in solitary confinement at a camp for Vietnam War refugees before immigrating to the United States. Her mother, a social worker for the United Nations fought for and secured his release from the camp. As a mixed-race couple, they faced harassment but served the Vietnamese community in Portland, she said.

Summer work with The Public Defender Service in Washington, D.C., “affirmed my passion for advocacy work,” Mai said. While defending indigent clients, she also hopes to write about the issues for lay audiences, she said, “so that the general public is better connected to the problems in our justice system.”

Juan Knatt, who grew up in the Hollygrove neighborhood of New Orleans, is bound for New York City and Ultra Music, a partner of Sony Music Entertainment. He’ll be handling duties as in-house counsel and as an A&R scouting talent for the label. Knatt said his journey to the position started when he met the company’s founder and head of A&R at the SXSW Music Festival in Austin.

A sampling of clerkships:

Chris Edmunds has three consecutive clerkships lined up: with U.S. District Judge Abdul Kallon in Birmingham, Alabama; Judge Gregory Phillips on 10th U.S. Circuit Court of Appeals in Cheyenne, Wyoming; and Judge Robert Wilkins on the U.S. Court of Appeals for the D.C. Circuit in Washington. Edmunds was Tulane Law Review senior notes and comments editor and president of Tulane Law’s American Constitution Society chapter. He received the John Minor Wisdom Award, which honors the legendary judge, a 1929 Tulane alum who was instrumental in enforcing civil rights for racial minorities in the South; and the Federal Bar Association Award.