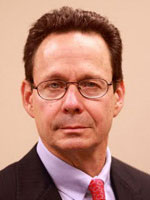 Mr. Cozad received his BA from Loyola University of New Orleans in 1972 and both his JD (1976) and LLM (1997, Energy and Environmental Law) from Tulane University Law School. After receiving his JD, he served as a law clerk to the Honorable Nauman S. Scott, Chief Judge of the United States District Court for the Western District of Louisiana. From 1978 to the present, he has been with the McAlpine firm in New Orleans, now McAlpine & Cozad.