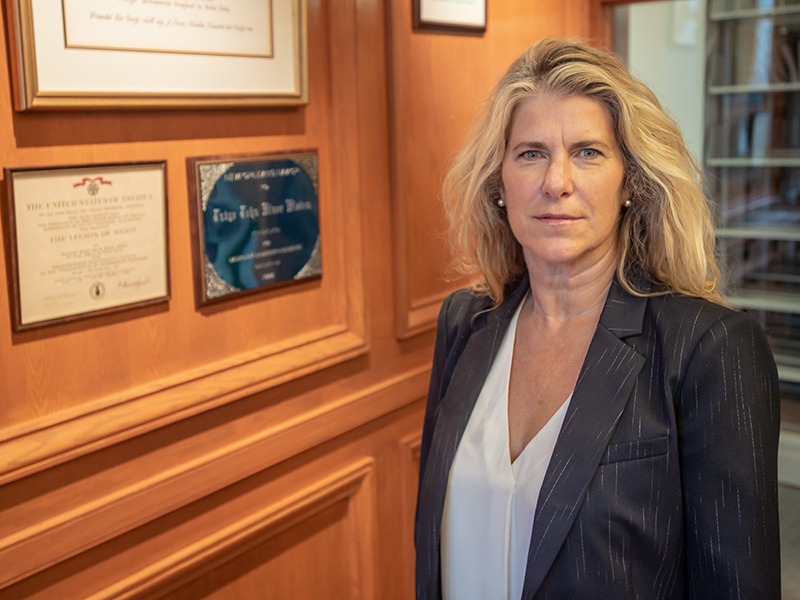 Katherine Mattes is Senior Professor of the Practice and Director of the Tulane Law School Criminal Justice Clinic.  She specializes in criminal litigation at all levels of practice, including trial, appellate, post-conviction and federal habeas.  She has particular expertise in the intersection of criminal justice and mental illness, specifically mental competency to proceed and the defense of not guilty by reason of insanity. She has been at the forefront of criminal justice reform in the state of Louisiana, and her advocacy has transformed the lives of hundreds of accused and incarcerated persons, especially those living with mental illness and juveniles sentenced to life without the possibility of parole.

Mattes has written practice manuals for Louisiana defense attorneys and for Louisiana judges on competency to stand trial and the insanity defense. She was lead counsel in State v. Denson, a landmark case that resulted in statewide changes to Louisiana’s treatment of mentally ill criminal defendants who are incompetent to stand trial.  Mattes has lectured throughout the state, consulted on litigation, and testified before state legislative committees on issues relating to mentally ill criminal defendants.  She has also drafted and successfully advocated for the passage of statutes dealing with mentally incompetent defendants, which aligned Louisiana law with United States Supreme Court mandates.  Mattes collaborates and teaches in the Forensic Division of the Tulane Medical School Department of Psychiatry.  She is a member of the Behavioral Health Criminal Justice Workgroup with the City of New Orleans Behavioral Health Council.

Professor Mattes’ other work includes advocacy on the issue of juvenile defendants sentenced to life without parole.  The 2012 United States Supreme Court case Miller v. Alabama held that it was unconstitutional to sentence a juvenile under a mandatory life without parole sentencing scheme. Mattes was counsel in the Louisiana case that held Miller was not retroactive; this ruling was later overturned by the United Supreme Court.  Mattes was at the forefront of subsequent legislative reform to implement the Supreme Court mandate, participating in strategic planning and community education, and testifying before legislative bodies in Louisiana and Texas.

Mattes has also taught and consulted on the criminal defense of domestic violence victims.  She authored “A Defense Attorney’s Guide to Representing Criminal Defendants Who Are Victims of Domestic Violence.”

Mattes has been recognized for her work in the aftermath of Hurricane Katrina to rebuild the Orleans Parish criminal justice system. Mattes accepted, on behalf of the Clinic, the Clinical Legal Education Association Award for Excellence in a Public Interest Project for work identifying, locating and representing people who had been incarcerated in Orleans Parish Prison and had been displaced by the post-storm evacuation. As part of this work she exposed a backlog of defendants who had been adjudicated incompetent to proceed and yet were held in jail, rather than the forensic hospital.  Many had been incarcerated in jail for more than a year after being found incompetent, in violation of their constitutional rights.  Mattes partnered with the Louisiana ACLU to initiate a challenge to this due process violation that culminated in a federal consent decree.  She also led a film crew into the flooded evidence rooms in the criminal courthouse and the New Orleans Police Department; subsequently she was a member of the ASPIRES Strategic Working Group, which designed and implemented new protocols for the preservation of evidence in criminal cases.

Prior to joining the Tulane Law School faculty in 2002, Mattes was a deputy public defender in San Diego, a staff attorney at the Innocence Project New Orleans, and Assistant Special Counsel for the Judiciary Commission of Louisiana.