After 46 years at Tulane Law, Professor Friedman to retire 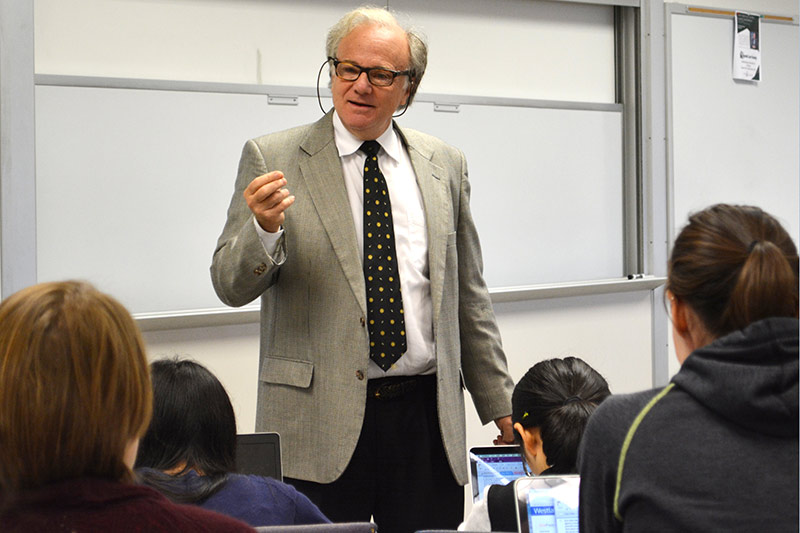 How he made it his life’s work is a story of dedication, a little luck, and the smarts to seize opportunities.

For more than four decades, Friedman has taught scores of Tulane law students, most recently as the Director of Online Legal Education, where he became the founder of the hugely successful master’s program for non-lawyers, the online Master of Jurisprudence in Labor and Employment Law (MJ-LEL). His work in online education has propelled hundreds of MJ candidates to grow in their careers and build new ones.

“This has, by far, been the most personally and professionally rewarding experience of my life. It’s impacted so many people,” said Friedman. “I have witnessed the professional advancement of hundreds of students and that has been incredibly rewarding.”

This summer Friedman is retiring after 46 years at Tulane Law, leaving a lasting impact on both students and the legal profession.

“Joel Friedman leaves a singular legacy at Tulane Law,” said law Dean David Meyer.  “For nearly half a century, he’s been a force of nature, both as a teacher and an academic entrepreneur.

“He shaped the professional identities of generations of Tulane lawyers in the classroom, and pushed Tulane to new horizons, opening new academic programs around the world and pioneering Tulane’s transition to online legal education,” Meyer said.  “For any student or colleague who spent time at Tulane over the past five decades, it is hard to imagine Tulane without him.”

A few moments with Friedman and you know he’s from New York; his father and grandfather raised families while working at the Macy’s Department Store in the heart of the city.  A product of New York’s public schools, he went to Cornell University for his undergraduate degree on a state-funded scholarship where he studied industrial and labor relations.

He would become the first lawyer in his family, and attend Yale Law, where he “idolized my law school professors. They were larger than life to me.”

He was at Yale at a time when a generation of notables destined to reach the nation’s highest offices were there, too.  His classmates included U.S. Supreme Court Justices Samuel Alito and Clarence Thomas as well as Bill and Hillary Clinton, among others.

After law school, he clerked for a federal judge but wanted to join the academic ranks and teach labor law.  Through a friend who also was his squash partner, he learned that then-Tulane Law Dean Joseph Sweeney was looking to expand the faculty.

“My first question was ‘Where is Tulane?’” said Friedman.

He joined Tulane in 1976 fresh out of law school and his clerkship, teaching torts, evidence and environmental law. He was among the youngest professors in the country and received tenure after three years at Tulane.

During his time, Friedman began to teach courses in employment discrimination law, which was a new field at the time, and taught summer programs. In those days, with larger law school classes and a heavier teaching load, he taught as many as 400 law students a year.

He became the faculty advisor to the Moot Court Program and reorganized the competition structure to become more like it is today. Along the way, he continued to teach and write about employment discrimination law and was the lead author of one of the first case books in the field.

“As a person who writes and teaches in the area of Work Law, I cannot overstate Joel Friedman's influence in the field, “ said Tulane Law Professor Saru Matambanadzo, who also teaches a course for MJ-LEL students in the online program. “As a leading casebook author and scholar, Joel has shaped how people think about Labor Law and Employment Discrimination.”

As much as he influenced his students, Friedman always mentored his colleagues, too, said Matambanadzo.

“I have been very fortunate to be Joel Friedman's colleague and friend during my time at Tulane. He has been an unflagging, energetic, entrepreneurial force, creating meaningful positive change at Tulane,” she said. “Joel has also been a great mentor to me. I am not exaggerating when I say, Joel has changed my life and the lives of many of my students! I am so grateful for him.”

“I can't imagine Tulane Law School without Joel,” she said. “He was my suitemate, my colleague and my friend.”

Friedman thrived in the classroom, and he was always ready to take on new challenges. He took on summer teaching courses or joined programs in Israel, China, South America and Japan over the years.

“Tulane gave me an incredible number of opportunities,” said Friedman. “I was able to go and see all of these places and teach there because I was a Tulane Law professor.”

When then-Dean Ed Sherman asked him to take on a program for lawyers in Mexico, Friedman jumped at the chance.  The program, called the Mexico Institute, brought law professors to Tulane to earn a PhD.

“It was a six-year program and it really got me interested in these kinds of things. It also gave me the idea of how we might provide legal content to people who couldn’t or didn’t want to go to law school but needed some legal training.”

He took on other challenges, too, like working with Major League Baseball teams, including the Los Angeles Dodgers, to help league managers improve teaching and communication skills. He also worked with several of Tulane’s athletic teams, including the baseball, football, swimming, diving, and bowling teams.

By 2013, Friedman was negotiating a string of institutional affiliations with universities in China, establishing LLM partnership programs at universities in Beijing and Shanghai as part of his programming duties. These experiences led Friedman to launch the Online Legal Programs for human resource professionals in 2016.  In its first year, the program exploded from its first cohort of 13 students to double that by its second year. Hundreds today have received their MJ-LEL doing so online from many unique corners of the world. In 2020, the online programs added master’s degrees for those in the energy and environmental industries, as well as a series of certificates in Title IX compliance issues.

“It’s been a very successful program, not just for the lives of the people who come through the program, but also for the law school,” said Friedman. “These programs have made a big difference to people who normally would not go to law school and I’ve been there to see it.”

What’s next for Friedman? For the moment, he plans on moving to Arizona to be closer to family. But he says he will likely keep teaching.

“I am open to whatever law school or law-related opportunities present themselves as I’m not ready or wanting to retire,” he said.

The law school will host a special program honoring Friedman on his retirement on Saturday, July 23, from 2:30-3:30 p.m. in Room 110 of Weinmann Hall.  The program is timed to coincide with the arrival of more than 100 of Friedman’s MJ-LEL students, who are converging on Tulane’s campus from around the country for the online program’s annual, in-person “summer immersion weekend.”  All alumni, students, colleagues and friends are invited to attend and join in the program.