Alum Chris James: 'A legal education has much broader reach' 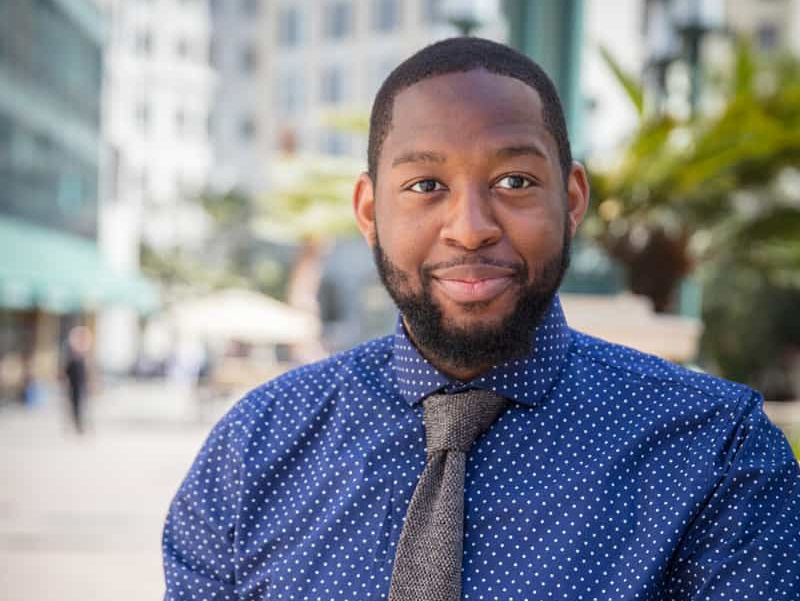 He was an academically gifted young Black man from southern Mississippi, so it went without saying that he was expected to choose a money-making career and buck the trends about poor, young Black men.

“I thought I would be a businessman and wear suits every day and have nice things,” said Chris James, Tulane Law alum from the Class of 2015.

It didn’t work out quite that way, but by every indication, James considers himself rich.

“I hope that I can be an example to others as we all go to law school with limited knowledge of the profession and the opportunities available. What I learned in law school is what got me to the work I do and that I love. A legal education has much broader reach.”

Today, James is a site manager for The W. Haywood Burns Institute, an Oakland, CA based national nonprofit organization whose goal is to eliminate racial and ethnic disparity “by building a community-centered response to youthful misbehavior that is equitable and restorative.”

James works with both youth and adult populations but has a key interest in the “adult side” of the issue – that is, people who are incarcerated in jails and prisons as opposed to youth detention centers.  The idea is to do less within the criminal justice system and more to empower community to create policy and practice changes, alternatives to incarceration, and community-based programs, services, solutions, and infrastructure.

“It is work that interested me since I started law school,” he said.

At first, law school wasn’t something he considered. He had won mock trial competitions in high school and really liked the argument side of the law, he said. But he needed to wear that business suit, and chase the dream of being an executive somewhere, so James went to the University of Southern Mississippi.

After four years of undergrad (he got a BA in Business Administration), he realized he wasn’t particularly passionate about business.

“I had teachers in high school who told me, ‘you are going to be a lawyer.’ I thought they were wrong until I got to college and realized that that the verbal, subjectively analytical piece was missing from my life,” James said. “I knew then that I would be going to law school.”

At Tulane Law, issues of social justice tugged at his heart. He was restless in class, looking for a chance to “do.” He got the chance through upperclassmen who were working with an organization called Stand Up for Each Other (SUFEO), which worked with New Orleans-area youth who were being suspended or expelled from school.

James and his colleagues were helping families, who often didn’t understand the schools’ quasi-judicial hearing system, to keep kids in school. (Research shows that when students are pushed out of school, they are more likely to get tangled up in the criminal justice system).

“I would go to these hearings and, on occasion, across from me there would be an attorney on behalf of the school from a big law firm, and I often thought about how these families would ever have a chance if someone wasn’t there to help them,” he said.

But the work – getting called to go to hearings at unusual hours, sometimes in the middle of class – took its toll. For James, it happened when the 1L open memo was due. The memo, as every law student knows, is the most important first-year writing assignment that teaches new law students how to develop an argument through research and writing skills. The memo teaches them to improve these skills and learn objective writing.

James had a hearing in the middle of preparing his memo, and “I had to go. I couldn’t leave this family just hanging. I knew that it was going to affect my law school grades, but I kept thinking that there was a bigger reason than me to show up. So I went.”

He got through the memo cramming the night before, and getting it to the law school, “within minutes of when it was due.” (For what it’s worth, he doesn’t recommend doing it this way.)

And that was how most of law school was for James. He continued helping kids in New Orleans, he took classes seriously, but working with kids before they were thrust into the system was a priority. His goal was to graduate and work for Brooklyn Defender Services.  He took summer internships clerking with the Youth Law Center in San Francisco and later with the Federal Public Defender in Miami.

After law school, James had missed taking the July bar exam, and was studying for the February one. Something, though, didn’t feel right. “I could study for anything, but I could not get myself motivated to do this,” he said.

He started working with CASA New Orleans, a community advocacy program for foster youth. He still planned on taking the bar. All the while, he was listening to inspirational videos and TED talks to help keep motivated. At the end of the process, he realized taking the bar was not what he wanted to do.

“The next day, I got a call from Tyler Whittenberg (L'14) – who had a profound impact on me in law school. He was incredibly smart and passionate, and a straight shooter who was unconcerned with pomp and circumstance.”

Whittenberg was leaving a position at Haywood Burns (he now is Chief Counsel for the Southern Coalition for Social Justice). The two had worked together before and he was willing to put in a word. “To me, that was the universe telling me that this is what I needed to do,” James said.

At the Burns Institute, he found the impact was wider, and reached more people. It was no longer a one-to-one client experience but establishing community-wide help and outreach. He has worked with community leaders across Texas, California and Florida.

Five years after graduation, this work with communities of color and individuals was noted in a Forbes  article following national Black Lives Matter protests last summer.

Since then, he has received calls from around the nation from friends, colleagues, and strangers.

At Tulane Law, he is part of a group of alumni who have asked for greater inclusion of Black voices in decision-making and for greater emphasis on diversifying the student and faculty ranks as well as more mentorship and academic assistance for students.

“It’s hard work that needs to be done, and it will make people uncomfortable,” he said. “But I’m looking forward to commitment, action, and implementation.”

If he has any advice for law students, especially students of color, it would be this:

“Never underestimate the power of your own narrative. Rather than trying to assimilate or adapt yourself into the norms of the legal profession, take your legal education and skill set and apply it to your personal story. Who were you before you got to this point? Who have you been and how have you operated over the past three years? How do you take the education you’ve earned and build on an identity which predates the degree?”