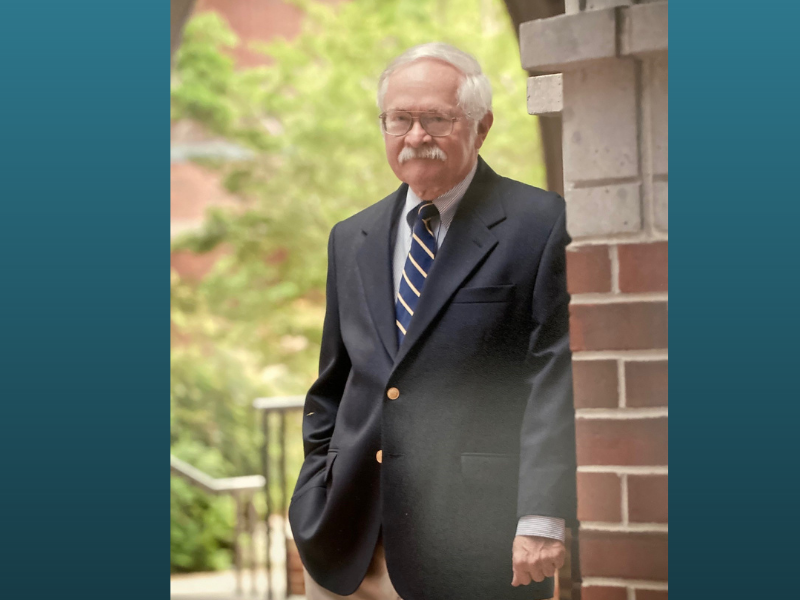 William “Bill” Lovett was the kind of law professor students remembered years after graduation – he simply was born to teach.

This makes the fact that he fell into teaching at Tulane somewhat by chance all the more fortuitous for the thousands of law students he mentored.

Lovett, who spent more than 50 years passing on his love of learning at Tulane Law School, died May 17 after a long illness. He was 87.

Just four days earlier, his family had attended ceremonies for his induction into the Tulane Law Hall of Fame, one of the highest honors given to alumni and faculty who made an impact on the law school.

“Bill Lovett was deeply devoted to Tulane Law School,” said Dean David Meyer. “And he was unsurpassed in terms of his irrepressible love of the classroom, his generosity to colleagues, and his lasting impact on generations of Tulane students.”

Lovett, who joined Tulane Law School in 1969, was an avid bibliophile and a scholar who came from humble beginnings to become a lawyer, an economist and law professor, traveling the world lecturing on banking and regulatory policies. Even after he retired and became a professor emeritus in 2008, he continued teaching occasional courses for several years and dropping in on colleagues to discuss current events.

“My dad’s whole life – certainly the last 50 years – was Tulane Law,” said his son, John Lovett, a 1995 Tulane Law graduate and now a professor of law at Loyola Law School in New Orleans. “He just loved teaching, and his colleagues and his students.”

Before arriving at Tulane in 1969, Lovett had been a trial attorney for the Department of Justice, Antitrust Division, and staff economist for the Federal Trade Commission. A young man just starting out in his career, he had already accumulated a long list of degrees: a Bachelor of Arts from Wabash College in Indiana; his Juris Doctor from New York University Law School; a Master of Arts in Economics from Harvard University; and his Ph.D. in Economics from Michigan State University.

Born in Milwaukee, the only son of a high school English teacher and a homemaker, Lovett was a voracious reader, using his library card weekly to check out three books at a time, said his son. He was “an egghead,” taking up playing in band, drama club and mock trial in college at Wabash.

He applied to graduate school, which was “a game-changer” said John Lovett, as his father received one of the first Root Tilden Scholarships, which covered all tuition, and room and board at NYU.

“He was able to spend a magical few years living in Greenwich Village in New York, a time Dad really cherished,” said his son.

From there, Lovett went on to study at Harvard, receiving a Master’s in Economics before moving to Washington to work. Lovett and his wife of 59 years, Claire, met when both were working in Washington; they married in 1963 and had two children, John and Leslie.

How a young man from Milwaukee arrived in New Orleans to teach law is the result of a bit of luck and a lot of Tulane Law lore.

John Lovett said his father’s story was that he had just finished his Ph.D. and decided he wanted to become a professor. As the story goes, the elder Lovett traveled to New Orleans for the American Association of Law Schools annual conference, where academics would make annual treks to seek out new job prospects. Halfway through the conference, his luck struck: He ran into then-Tulane Law Dean Patrick Sweeney at the Hotel Orleans’ registration desk. Sweeney had been one of Lovett’s favorite professors at NYU Law and hired him on the spot.

“It was really a golden age at Tulane,” said John Lovett. “The faculty was much smaller, and they hung out together a lot – often in our backyard pool. Mom is a wonderful cook and they loved to entertain, so the faculty and their families were always at our house. I literally grew up with the faculty at the law school.”

Lovett relished being a law professor and seeing his students grow. He didn’t keep office hours because he was always in his office with an open door, ready for long conversations about the history of the American banking system, the origins of GATT and the WTO. And in those conversations, Lovett got to know his students and dispensed career advice generously. Sometimes, he taught classes at the house, because that’s how things were back then and, besides, Claire had become famous for her homemade cookies.

He taught the likes of Joe Parkinson (L’71), who later became a member of the law faculty and went on to become a founder and CEO of Micron Technology, a pioneer computer chip maker.

Parkinson delivered remarks honoring Lovett during the Hall of Fame ceremonies, recalling a professor who could teach four courses in a year and make it look easy, a teaching style so refreshing that Parkinson signed up for everything Lovett taught. And then, he recalled Lovett’s generous correspondence over the years.

“There was a letter reminiscing about his trip to visit us in Idaho, typed and beautifully written, glad to meet my Mother and our baby boy,” Parkinson recalled. “Then there was a copy of a paper I had written [for a class] with the hand‐written note, ‘An old favorite.  I thought you’d better keep it.’  He mailed it to me in 1995, 25 years after I wrote it."

At about the same time, Cindy Samuel (L’72) became one of Lovett’s students, and he encouraged her to take his economics and the law seminar.

“I was a civil law student, and he was common law, so I thought it might not interest me, but I signed up for it in my second year,” said Samuel, who later joined Lovett as a colleague on the Tulane Law faculty. “Well, it turned out to be interesting and fun because Bill made it that way. I wrote a paper about Louisiana and no-fault accident insurance, something the legislature was considering at the time. Bill liked it so much he put it on reserve in the law library.”

A year or so later, one of the law professors told Samuel he had used her paper as part of his testimony before the state legislature. “It was an honor, but it was all because of Bill,” said Samuel.

After law school, Samuel worked in private practice, eventually returning to Tulane to teach civil law in 1975. Today, Samuel is known for her pioneering efforts to reform Louisiana’s law relating to successions, trusts, property and families.

“Bill was just a great professor, a great colleague and friend,” Samuel said. “And he really was born to teach.”

The Lovett family home on Chestnut Street was the center of the law school’s social life, say his former students.

The Lovetts were fond of hosting parties – Bill charming and personable, and Claire, the consummate hostess and exceptional cook. The faculty attendees to their regular soirees reads like a Who’s Who of Tulane Law icons. Among them was Ferd Stone (former director of Tulane’s Comparative Law Institute), Leon Hubert (who helped revise Louisiana’s Code of Practice, the procedural system that all Louisiana law is based upon), Hoff Fuller (long-time chair of the Tulane Tax Institute), Bob Force (founder of the Tulane Maritime Law Center), Chris Osakwe (a world-recognized expert in comparative law, particularly Russian financial law) and Professor Oliver Houck (now a professor emeritus and one of the early pioneers of Environmental Law). There were so many others throughout the years, including current faculty like Professors Vernon Palmer, Mark Davis and Joel Friedman.

During his extensive law career, Lovett wrote or co-wrote several books on banking, finance and economics. In 2019, his book Banking and Financial Institutions Law in a Nutshell, was released in its 9th edition. The book, originally written in 1978, has been translated into several languages, including Chinese.

Lovett also wrote extensively about monetary and trade policy, antitrust, U.S. trade policy history, and world market policies. He traveled to lecture and teach, too, to Japan and East Asia as a guest professor on banking and regulatory policies. He also taught in the United Kingdom, Canada, Ireland, France, Germany, Netherlands, Sweden, Finland, Greece, and Australia.

Lovett was so respected at Tulane that an anonymous law school graduate established an endowed fund in his name, to be used to assist a law student each year with tuition costs.

The Lovett family will celebrate his life in Castine, Maine in August and in New Orleans in the fall.

Lovett is survived by his wife, Claire, and his two children and three grandchildren, as well as many colleagues, former students and lifelong friends both in New Orleans, and Castine, Maine, where the family would spend summers.

In lieu of flowers, the family requests donations be made to the William A. Lovett Scholarship Fund at Tulane Law School.