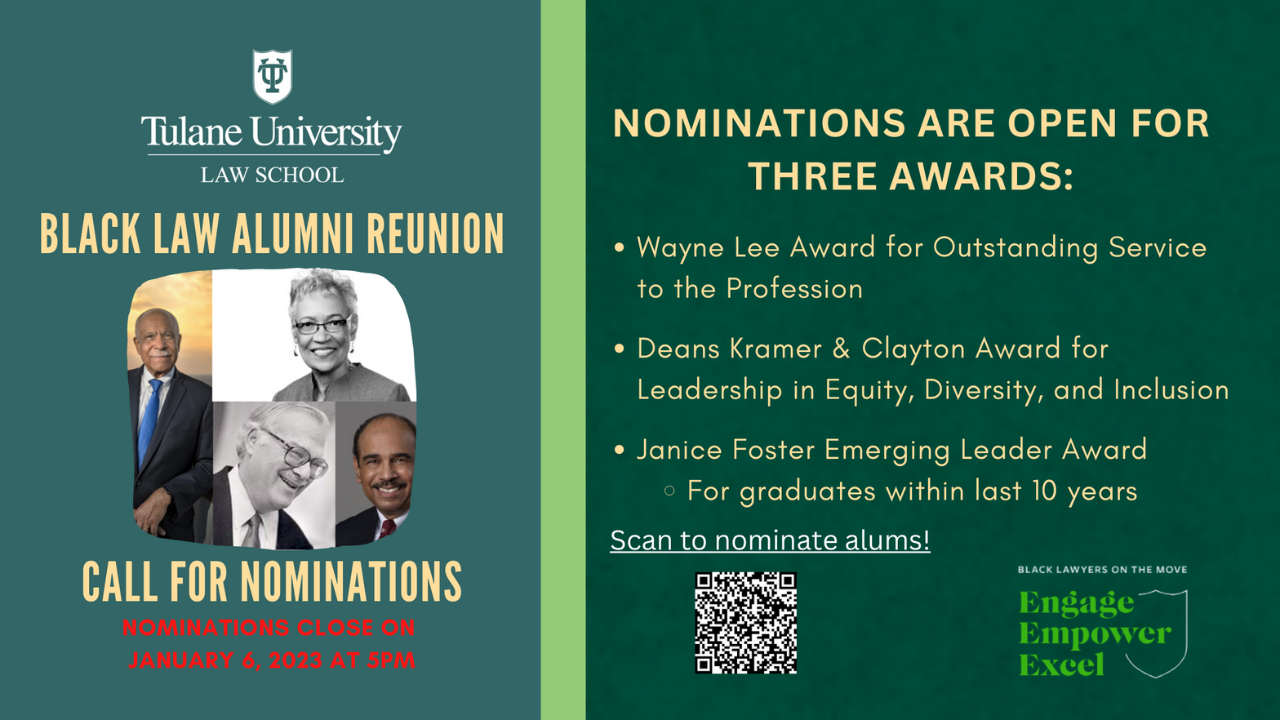 Tulane Law School is calling for nominations from alumni for three major awards celebrating the leadership and impact of Black alumni, all of which will be presented during the 2023 Black Law Alumni Reunion.

Nominations must be made by Black Tulane Law alumni, and the recipients will be honored during the Feb. 3-5 event. Nominations end Jan. 6, 2023 at 5 p.m. Central.

The law school announced last summer that it was creating three awards named for trailblazing alumni that would honor those who exemplified leadership and furthered diversity in the legal profession, including those who are early-career professionals.

The Deans Kramer & Clayton Award for Leadership in Equity, Diversity and Inclusion will be presented to Tulane Law alumni in recognition of exemplary impact in advancing the cause of access and inclusion in the legal profession.  The award is named for John Kramer, who served as the 19th Dean of Tulane Law School from 1986 to 1996, and Robert Clayton, who served as an Associate Dean and leader of an innovative and remarkably successful program at Tulane to recruit and mentor minority law students.  During the years of Dean Kramer and Clayton’s leadership, Tulane Law School boasted the highest representation of Black students of among U.S. law schools, excluding historically Black institutions.  Many of those graduates have gone on to major leadership positions as judges, members of Congress, university presidents and scholars, civil rights and public interest advocates, and heads of law firms.

The Wayne Lee Award for Outstanding Service to the Profession will recognize Tulane Law alumni who exemplify servant leadership and timeless contributions to the legal profession.  The award is named in honor of Wayne Lee, a 1974 Tulane Law alumnus  and widely respected New Orleans lawyer who was a pioneer in opening up Louisiana’s legal profession.  A senior partner at the New Orleans law firm of Stone Pigman, Lee was the first African American President of the Louisiana State Bar Association and has played numerous critical leadership roles in the legal profession at the city, state and national levels.

Finally, the Janice Foster Emerging Leader Award will honor Tulane Law alumni who have graduated within the past 10 years and already distinguished themselves for their leadership and service to the profession and larger community. The award is named for the law school's first Black woman graduate, and the second Black student to earn her JD in 1970. Foster, who spent more than 30 years practicing mostly tax law in the New Orleans area, as well as serving in a number of civic and charitable organizations, in 2022 was inducted into the Tulane Hall of Fame.

“We are excited to recognize the extraordinary talent and leadership of Tulane Law School’s Black alumni through awards that simultaneously honor the remarkable and ongoing legacy of leaders like John Kramer, Robert Clayton,  Janice Foster and Wayne Lee,” said Tulane Law Dean David Meyer.  “And, in celebrating our remarkable alumni, we recommit ourselves to Tulane Law’s historic leadership in advancing the cause of equity, diversity and inclusion in the legal profession and in society at large.”

The new awards were conceived and developed by the alumni leadership committee responsible for planning Tulane’s Black Law Alumni Reunion Weekend.  The inaugural BLA Reunion Weekend, held in February 2019, drew more than 400 Tulane Law alumni to campus for a series of programs, lectures, panel discussions, and revelry.  The awards will be presented at the second BLA Reunion Weekend, scheduled to take place in February of 2023.