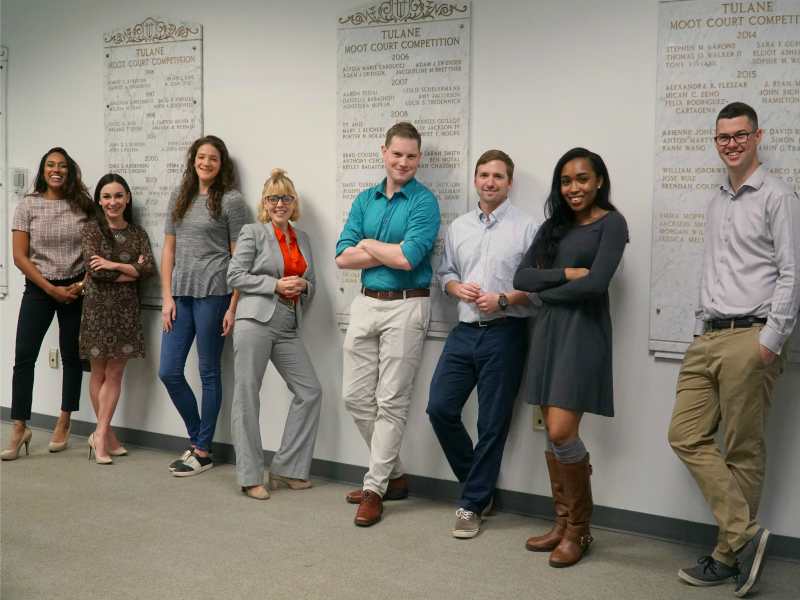 Flashback to 2018: Intraschool competition winners compete to have their names engraved on the marble slabs in the Wendell H. Gauthier Appellate Moot Court Room.

Here is a law school secret: No lawyer was born knowing how to argue a case skillfully.

One way to hone that skill set is taking part in competitions hosted by Tulane Law’s more than 90-year-old Moot Court Program, one of the largest student-run organizations at the school and among the oldest programs of its kind in the nation.

Coming up is one such opportunity, the Intraschool Competition, which is open to all second- and third-year law students, regardless of whether they are part of Moot Court.

Starting Saturday at 10 a.m., upperclassmen can sign up for the Intraschool argue-ons in three distinct areas: Appellate, Mock Trial and ADR (Alternative Dispute Resolution). Sign-up sheets are located on the Tulane Intraschool TWEN page. The 3Ls will have the honor to compete for the “marble” – having their names forever carved on massive slabs in the law school’s Wendell H. Gauthier Appellate Moot Court Room. The 3L winner of each discipline will have their name engraved.

Sign-ups for this year’s virtual Intraschool runs through March 2 at 7 p.m., and the first rounds of competition run March 8-10. Second rounds are March 12-14. All rounds will be hosted on the Zoom platform and those with the highest scores after the second round will be selected as winners. The finalists in the Appellate discipline will move on to the Honorary Round, which will take place on April 22.

Sam Sands (L’21), the Administrative Justice for Intraschool, said COVID-19 may have changed the competition, but it still brings the law school together.

“We are excited for and looking forward to this year’s Intraschool tournament. Though we are not all together on campus, this is an opportunity for all of us to come together safely and conveniently for some fun, friendly competition.”

This year, Sands said his goal was to make the competition as fair and open to students as possible by recruiting more faculty and practitioners as judges, not just those involved with Moot Court.

And, there is an additional enticement for students to take part: There is a $900 Themis Scholarship Certificate for each participant, which can be used towards the legal education company’s classes, courses, and other great law school resources.

Sands said the competition is also holding two virtual information sessions. One on Feb. 25 was recorded and available for viewing on the Intraschool TWEN site under the 'General Information' section. A second on March 2 will take place at 3:30 p.m. here.