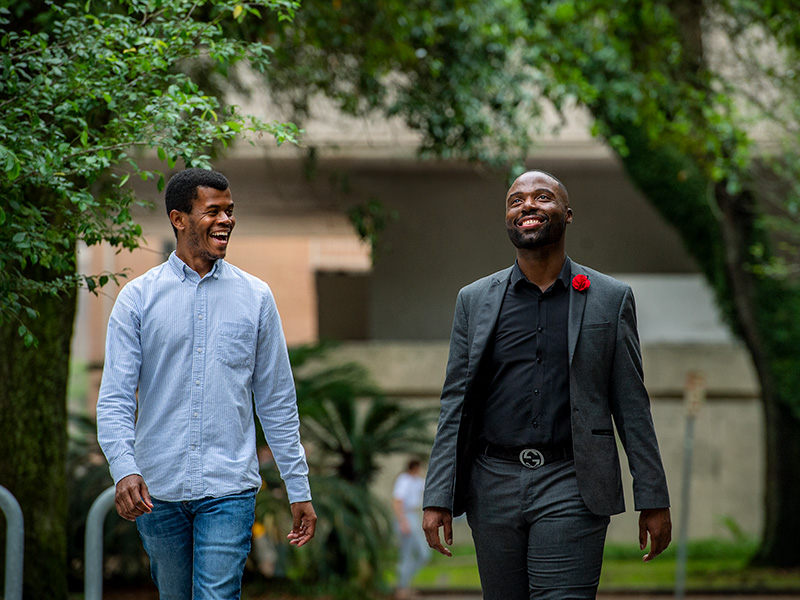 Gerald Williams, (L'19) spent most of his law school years battling cancer. He said he would never have made it to graduation without the help of his friend, Randolph McKinnie (left), who rallied classmates and managed his care as Williams underwent chemotherapy. (Photos: Paula Burch-Celentano)

There is nothing easy about law school. It is three years of relentless, complex and demanding work.

Now imagine attending one of the nation’s most rigorous law schools following a diagnosis – and subsequent treatment – for stomach cancer.

“I thought I would have to take time off,” said Gerald Williams, who, through sheer perseverance and determination graduated this spring, a member of the Class of 2019.

“I never felt like I was in this struggle by myself."

Gerald Williams (L'19), who battled cancer while in law school

He finishes law school cancer free, aiming for that six-month mark that will allow him to say “remission.” On graduation day, the collective law school family celebrated with him, making this year’s graduation a little sweeter. Everyone is on Team Gerald.

“I never felt like I was in this struggle by myself,” said Williams, who was also president of the class of 2019.

Maybe that’s because from the start of his ordeal, he never fought cancer alone.

The first sign something was wrong was the summer he was a rising second-year student and hospitalized with searing pain – appendicitis, he thought -- while studying abroad as part of the law school’s Berlin summer program.  “Professor (Jörg) Fedtke visited me every day in the hospital,” he recalled.

Back in New Orleans, he was in and out of doctors’ offices and the hospital. It had to be his diet, he was told. A change in eating habits didn’t help. Eventually came a diagnosis of Crohn's, a disease that causes inflammation of the digestive system.  He took medication for that, but found little relief.

All the while, he continued his law studies. His quiet, persistent dedication to his classmates got him elected class president. He was giving a lot of his time to issues he cared about, such as working with minority law students and in programs focused on civil rights issues.

"Gerald exemplifies the meaning of turning trials into triumphs,” said Kerianne Strachan, who was the 2018 class president and worked closely with Williams. “Despite the challenges that faced him during law school, he continued along his path with a smile and the determination to succeed.”

Williams’ health was not improving, though, and his absences became more noticeable. Privately, he had days he barely made it to school before the pain in his belly was intolerable. At about the same time, Williams was mentoring a first-year law student who would ultimately help save his life.

Williams was the assigned mentor to Randolph McKinnie under the Dean Rufus Harris Peer Fellow Program, helping the young student navigate law school and survive the grueling demands of the first year. 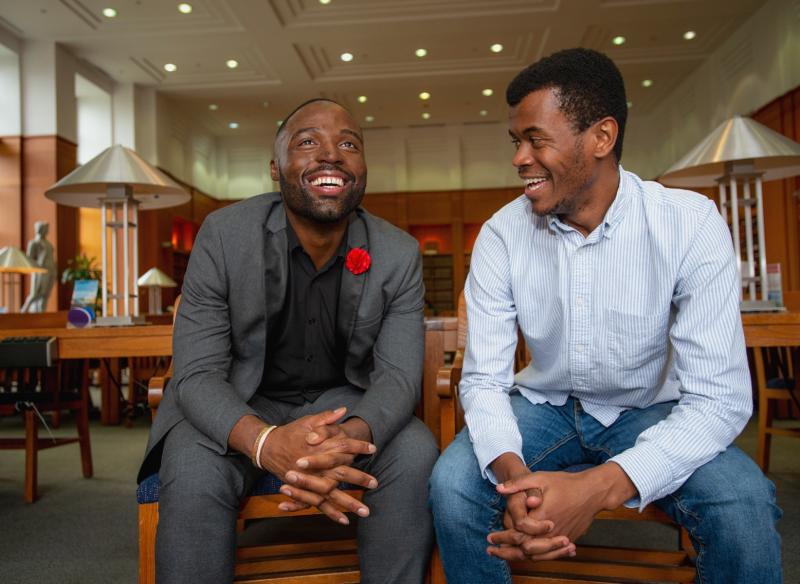 “Here was this guy spending a lot of money to go to law school, and he was helping everybody else, and giving of his time, and on top of that, he’s taking an Uber to his appointments,” McKinnie (L’20) said. “So I started giving him rides to the doctor.”

Spend any time with McKinnie, and you quickly learn he's a force of nature. His friend's health worried him. "I just knew something wasn't right," McKinnie said.

At first, McKinnie voiced concern about Williams' treatment and diagnosis. Eventually, he was sounding an alarm.

It was McKinnie who pressed Williams to get a second opinion from a new team of doctors, who ultimately diagnosed his cancer. It was McKinnie who took the New Yorker home to Florida on Thanksgiving so he wouldn’t spend the holiday alone. When he got sick on the trip, McKinnie’s family took care of Williams.

Eventually, he rallied law school friends to help out. He cooked meals, cleaned Williams’ apartment, got his assignments. He was chief schedule-keeper, medicine dispenser and health advocate.

And the sicker Williams became while undergoing chemo, the more McKinnie became his caretaker. There were days his friend could barely get out of bed, or remember to take his medications. On really bad days, Williams couldn’t hold himself up.

Sometimes, “I just sat with him,” McKinnie said. “He was in a dark place. And I just encouraged him to keep going; that all these people were counting on him. He was going to make it.”

Right there with McKinnie was the entire law school.  While classmates shared notes, the faculty adjusted deadlines, offered extensions and tutoring, and made sure Williams stayed on track. Although his hospital stays grew longer, there was always someone stopping by to keep him company.

“I found all this love around me and that got me through,” Williams said. “My studies gave me hope when I didn’t want to get out of bed. Before this experience, it was easy to make an excuse for everything. But life hit me in a way I wasn’t prepared for. And it taught me I could overcome.”

Williams’ third year brought better days. He had the right treatment, was putting on weight and was engaged in his studies. He was class president – again.  And, in early spring he was done with chemo and was offered a job post-graduation with Manhattan Legal Services.

His classmates inspired him, Williams said, and are the reason he can finish law school. He’ll address them Saturday, as their president and a graduation speaker.

As for McKinnie’s role in his life, Williams is grateful and humbled.

“I can count the number of days on one hand when Randy wasn’t around,” Williams said. “I have a lifetime of gratitude for him, and also for my classmates and this law school.”