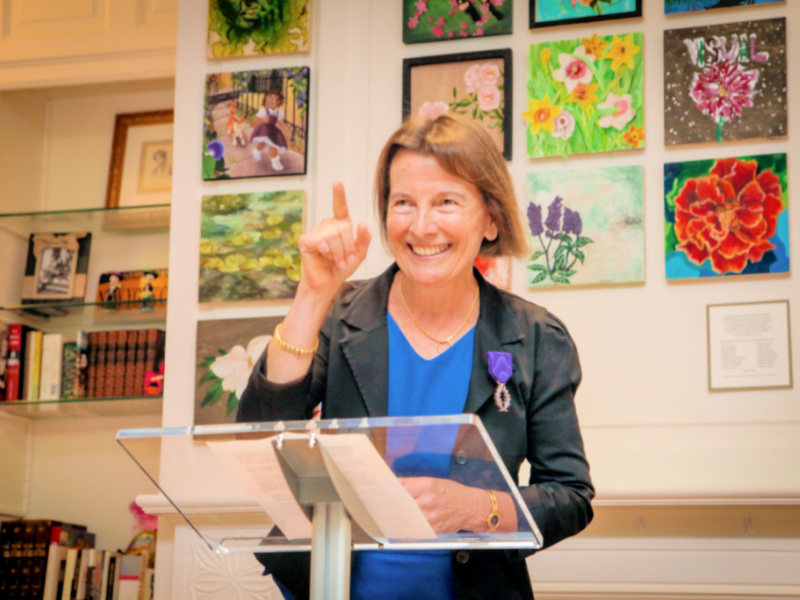 Prof. Dauphine Sloan teaches French and International Development in Tulane’s School of Liberal Arts, and also directs the law school’s Payson Graduate Program in Global Development, which graduated its last Ph.D. candidate this semester.
The Order of Academic Palms is a type of knighthood of France for academics and cultural and educational figures. (Photo: Audoin de Vergnette, Press Attaché at the Consulate General of France in New Orleans)

In recognition of her extensive contributions to the cause of education and French culture, the French Republic has named Tulane Prof. Dauphine Sloan a Chevalier in l’Ordre des Palmes academiques.

The Order of Academic Palms is a type of knighthood of France for academics and cultural and educational figures who have given service to French education and culture.  Tracing its roots back to the Emperor Napoleon in 1808, it is among the highest honors for academics in France.

The honor was conferred on Sloan at a reception at the French Consulate in New Orleans by Consul General Vincent Sciama earlier this week, in the company of Tulane Law and Payson colleagues Profs. Bill Bertrand, Oliver Houck, Dean David Meyer and Prof. Vernon Palmer, himself also a Chevalier of the Order.

Sloan was honored alongside her Tulane colleague, French Prof. Annette Sojic, who was also named a Chevalier of the Order.

Sloan, who speaks five languages, began her career in French diplomatic service and held a number of posts relating to strategic international studies.  At Tulane, she has taught a range of courses relating to international development and to French language and culture, including a course taught in French on Development in the Francophone World.

Her late husband, Prof. Robert Sloan, was a longtime faculty member at Tulane Law School and an internationally recognized expert in energy law and policy.  A Senior Research Fellow with the law school’s Center for Energy Law, he passed away last summer after battling brain cancer.

Sloan is originally from France and is the daughter of the renowned French painter and military commando Guy de Montlaur, whose bold, abstract paintings were featured at the WWII Museum in New Orleans during the 75th anniversary of D-Day in 2019.

She received her Doctorate in Sociology and her Masters in Applied Modern Languages from the University of Paris V, as well as a post-graduate degree in Soviet and East European Studies from the Institut d’études politiques de Paris (Sciences Po Paris).

Before joining Tulane’s faculty, Sloan was previously Assistant Director of the Russian and Eurasian Studies Program at the Center for Strategic and International Studies (CSIS), in Washington, DC. Subsequently, she managed the ACE Program (Action for Cooperation in the field of Economics) in Brussels, a European Union assistance program to the former Soviet Union and Central and Eastern Europe, funding research projects on all aspects of the region’s transition from planned to market economy.