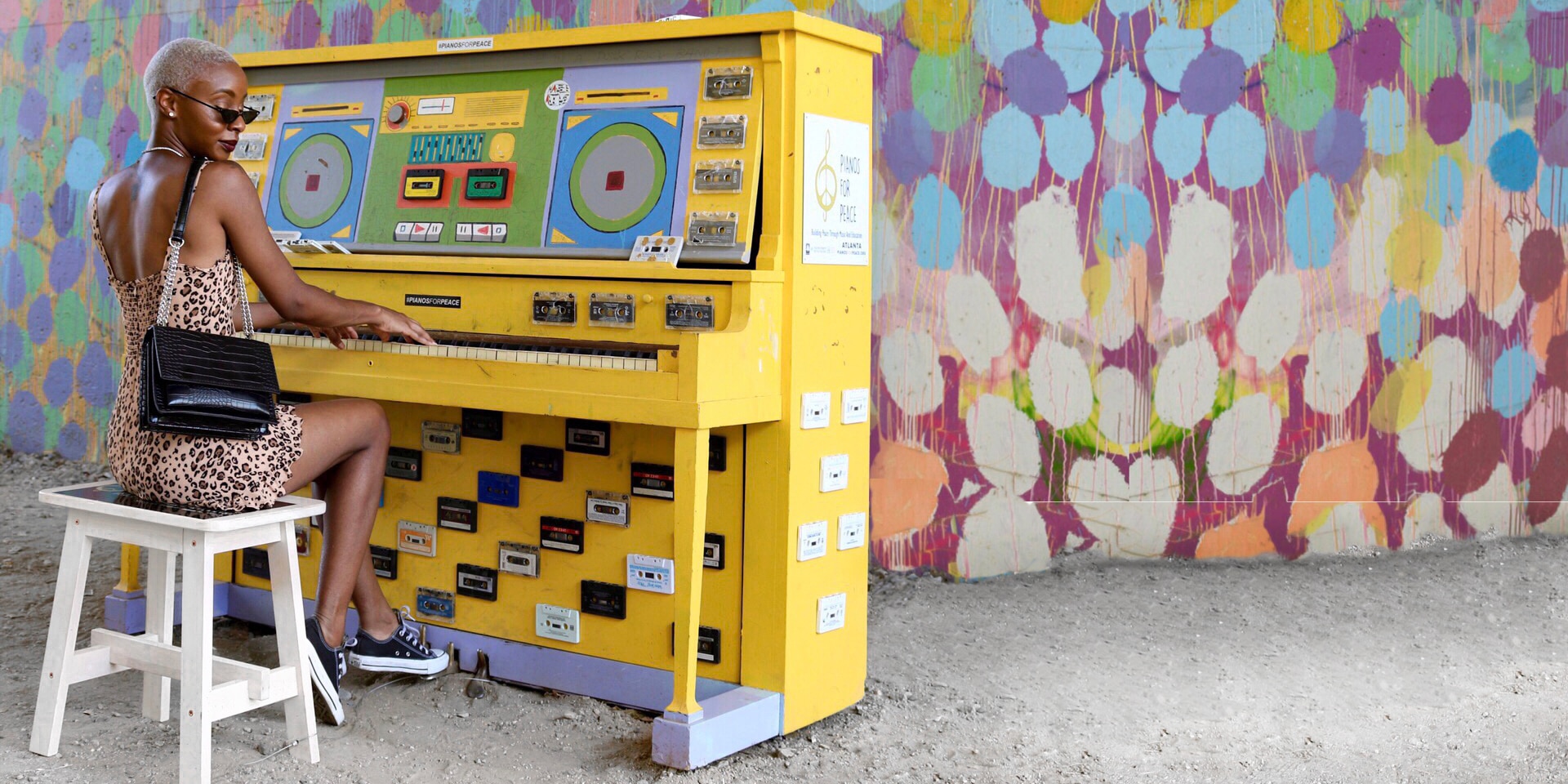 Blake Gifford (L'15) creator of Signed, Blake (@SignedBlake), with more than 80,000 followers on Instagram, officially announced a few weeks ago that she will be building her own clothing collection with Amazon the Drop. (Photos Courtesy of Blake Gifford.)

Gifford (L’15) is her only client, doing the monumental work of turning what was a fledgling fashion blog started in college and featuring her thrift store finds into her own brand, Signed, Blake, while breaking into a notoriously difficult industry. She is a lawyer, but one who like many others has chosen a completely untraditional path.

Signed, Blake (@SignedBlake), with more than 80,000 followers on Instagram, officially announced a few weeks ago that Gifford will be building her own clothing collection with Amazon the Drop.

“I’m proud of this moment, because it’s the result of me getting out of my own way and asking for what I want,” Gifford told her followers in her announcement, on social media. “For what we deserve. I wanted there to be more of ‘us’ in the lineup so... I asked. And the answer was an immediate and resounding, ‘YES!’ ”

She is decidedly an influencer. Brands pay her to wear their names and Gifford delivers. Her social media pages are part high fashion, part personal confessions, part inspirations, part private journal. Her message to followers is often simple: I struggle, too. I fall. I get up and I conquer. You can, too.

Her topics range from simple self-care, to romance, to managing difficult clients, to racial injustice and every woman’s need for a sisterhood.

Of course, Gifford does this with high-quality photographs and wearing name-brand fashion. Her website, is mix of high design, grace and fluid style.

In her social media pages, she is pictured in snowy Utah, bundled up in chic fur. She’s in Barbados, propped on a bed with crisp, white linens in her bathrobe, casually flipping through a magazine. She’s on a three-wheel motorcycle, black and hot pink, fully dressed in leather. She promises followers to take her “new baby” for a ride out west. 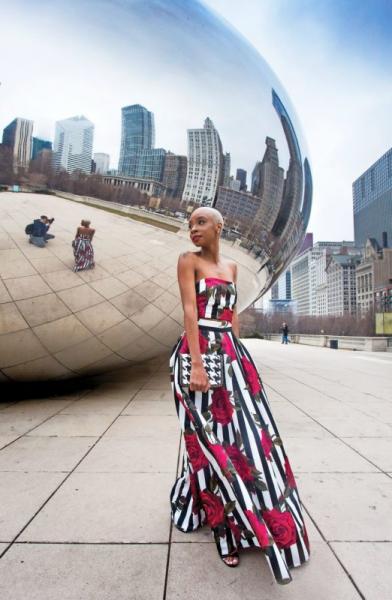 But how she got here is as incredible as how she took a local, personal blog to national influence. Her early life was a world away from high fashion and Barbados.

Gifford was born in Columbus, Ga., and was transferred into the foster care system by the time she was 8. She lived in a series of group homes until she landed at Georgia Industrial Children’s Home in Macon, Ga. She felt safe there.

School also was her “safe place.” She was good at it, and Gifford acknowledges the many teachers who helped, guided and encouraged her abilities.

“I loved school. It was safe, and—prior to my days in foster care—the one place where I knew I would eat that day and I was happy,” she recalled.

At 18, she aged out of foster care. She headed to Atlanta and Spelman College where majored in psychology, with a plan to go into social work, and eventually become a public defender. From Spelman, she entered New York University, where she earned her Master’s in Social Work.

She worked summers helping teen mothers and former inmates find housing, get career counseling and re-enter society, all with the goal to attend law school.

Once she arrived at Tulane Law in 2012, things started to change. Her plan showed a few cracks. The first year of law school, with mandatory classes in legal procedure, intense writing workshops with little creative outlet, took a toll on her.

“I started to question whether I wanted to do this kind of work. I felt like a candle, and law school was snuffing me out.”

A summer internship at the Bronx Defender’s Office, working with attorneys and at-risk clients left her “emotionally drained.” Gifford was miserable.

“I literally could not breathe. I already knew Big Law was not for me and my heart had been set on public interest. But now what?” she said.

“I headed to Dean (David) Meyer’s office and I remember sitting there sobbing, literally unable to breathe, asking him what I was going to do now. I was in a panic.”

True to form, Meyer told her that this is EXACTLY why she went to law school. The first year shows you what you love, and what you really don’t want to do, Gifford recalled.

She also learned what she did love. That was intellectual property law. In those IP classes, she learned about legal issues of online work and got a taste for entertainment law.

“As a creative, this was my outlet. I found the Ella Project (Entertainment Law Legal Assistance) and worked with performers and gig workers to make sure they had solid contracts or legal protections,” Gifford said.

She had found her 'thing.'

From there, she took up her “old” fashion blog with a new focus and began remaking herself. “I turned myself into my own portfolio!”

And, she loaded up her second and third years of law school with IP classes and anything that would get her back to New York and work in a fashion brand.

All the while, her social media pages were growing.

“Literally, I would take photos of myself in my apartment, post it and then get on my shuttle to go to law school. It was just me, throwing outfits together.”

In her third year, a shoe brand called Shoe Dazzle asked her to post some photos wearing their shoes. “I was like, ‘great, free shoes!’ But after a while, you realize your voice is valuable and you should be compensated for it,” Gifford recalled.

After graduation and without a job offer in her favorite place—at the time—of New York City, she took a friend’s offer to come to Chicago, and study for the bar. She ended up falling in love with Chi-Town, where she lives today.

Still trying to figure out a way into the IP field with a resumé packed with public interest work, she turned to the marketing industry as a “backdoor” option.

Friends in the industry encouraged her to do her own thing. She was, they said, just as valuable as an influencer than as an in-house attorney. So, she soldiered on with her blog, getting a few hundred dollars here and there from brands willing to pay.

The first two years after graduating law school were hard.  “Broke doesn’t even begin to describe it. I was broker than broke. There were times a brand would invite me to a party downtown and I didn’t have the $2.50 to get on a bus and go there,” she recalled.

But, by her third year post-law school, there she was, negotiating her own deals with the lawyers of major household brands.

“Law school gave me that confidence to know I could go up against a team of attorneys, and so far, I think I’ve done very well,” Gifford said. “There are still times I look around my home and I am still like ‘Wow, this is all mine.’ But yes, I did it all myself.”

Law school also showed her her path, she said. 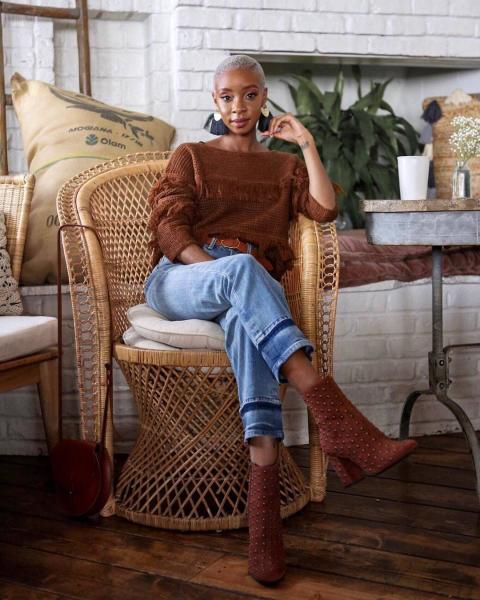 Next for Gifford is building her line with Amazon the Drop “which is so much fun.” It will be geared at all women, Gifford said, and range from extra, extra small sizes to 3X (00-26). “I wanted to create a line that spoke to everyone, especially my community.”

She chooses colors that she loves but look great on black skin, and designs that have high style. Eventually, she plans to be a household name herself, she said, with home décor lines and books.

“We’re so proud of everything Blake has accomplished and excited about what lies ahead for her,” said Meyer, who said he recalls well the fateful meeting she recounted during her time a student.  “She personifies the very best of Tulane Law – intensely creative, talented, independent-minded, and driven to make a difference.”