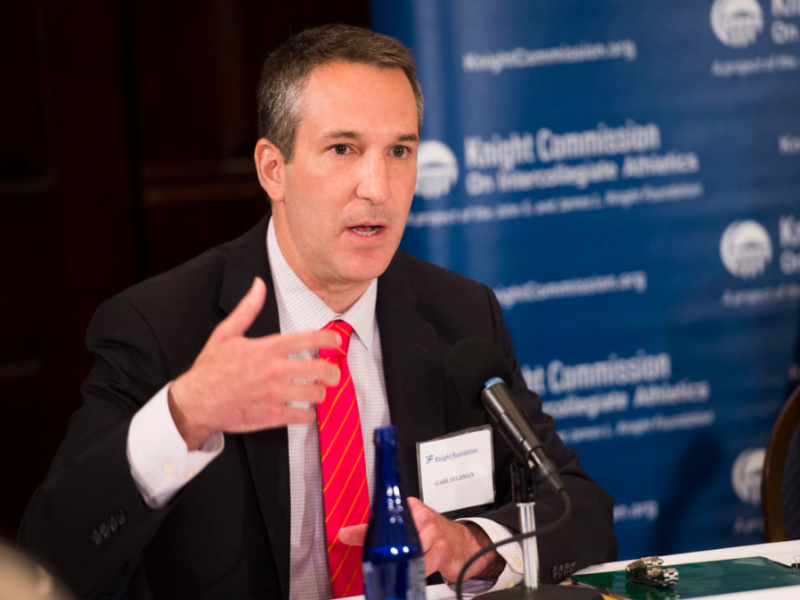 (Photo courtesy of the Knight Commision)

Professor Gabe Feldman, the nation’s leading academic in the field, and the Director of the Sports Law Program, is the law school’s first to hold the endowed Sher Garner Professorship in Sports Law.

Established by alumni and longtime supporters, Leopold and Karen Sher and James and Tracie Garner, the gift was the largest  to Tulane’s Sports Law program since its founding more than 25 years ago.

“Tulane is recognized around the world for its leadership in sports law,” said Dean David Meyer. “We’re enormously grateful to Lee and Karen, Jim and Tracie, and the Sher Garner law firm for their visionary support of our faculty and this important program.”

It has been a whirlwind of a year for Feldman, whose work,  particularly in the area of compensation rights for college athletes, has set Tulane Law School apart. Feldman has been a leader in the NCAA’s Name, Image and Likeness (NIL) debate across college sports, on whether collegiate athletes should be paid. He is a Reporter for the Uniform Law Commission Committee on College Athlete Name, Image, and Likeness, directing the substantive work the committee takes in an effort to create a uniform law that all 50 states will adopt to provide college athletes with rights to receive compensation for their right of publicity.

He spoke at symposia conferences across the  country including at Harvard Law School, University of Virginia Law, Georgetown, Duke and the Sports Lawyers Association annual conference as well as the Student Sports Law Network and the Association of Governing Boards of Universities and Colleges National Conference.

Feldman has also started a podcast, "Between the Lines: A Podcast About Sports and the Law"  where he interviews newsmakers in the legal aspects of sports on a variety of timely issues.

His media appearances have been equally numerous. His comments have been included in Forbes, The New York Times, Sports Illustrated, NBC News, NPR, and the Wall Street Journal as well as several news podcasts.

Tulane Law became the first in the country to offer a specialized certificate in sports law in 1993 and remains a world leader in the field. Sports law spans a range of legal fields, including antitrust, contracts, intellectual property, labor, and torts, as well as associated legal skills of negotiation, arbitration and litigation, all focused on their distinctive application to amateur and professional athletics.

The global business of sports, now estimated to exceed $700 billion in revenue, is one of the fastest growing sectors worldwide.  The legal issues presented range from sophisticated marketing, investment deals, and labor disputes to lawsuits filed by injured athletes and disgruntled fans, such as the flurry of litigation spawned by, for example, the New Orleans Saints’ “No Call” controversy.

Tulane’s Sports Law program is a significant draw for students from across the country.  In addition to course work, students are active in the Tulane Sports Law Society and help run annual negotiation and arbitration competitions based on professional football, basketball and baseball.  Students also organize and host Tulane’s annual Mardi Gras Moot Court competition, which draws competitors from law schools across the country.  Students also edit and publish The Sports Lawyers Journal.

Leopold Sher (A&S ’74, L’76) and James Garner (E ’86, L’89) are the founders and co-managing partners of the New Orleans law firm Sher Garner Cahill Richter Klein & Hilbert, LLP.  Tracie Garner (UC'97) and Karen Sher (NC ’74, L ’77) also have been ardent supporters of law school programs.  Both couples have children who are alumni or current students at the law school as well and have a long history of  support for the school, including an endowed scholarship and gifts to support faculty research and engagement.

“The Shers and Garners are standard-bearers for excellence in the legal profession and for Tulane,” Law Dean David Meyer said.  “Our students and faculty have widely benefitted from their generosity and their support of our Sports Law program will ensure Tulane’s continued global leadership in a field of growing academic and professional significance.”