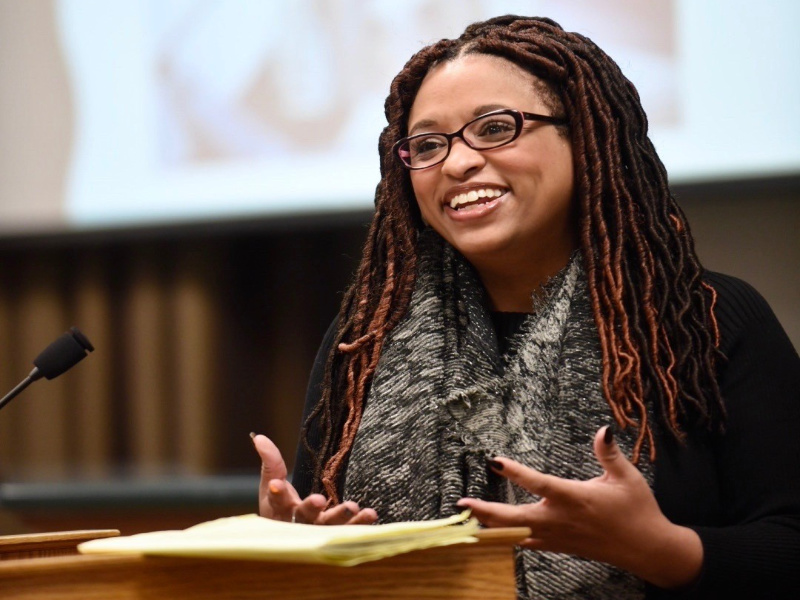 There is a national discourse taking place about natural hair and Tulane Law alumna Wendy Greene is squarely in the thick of it.

Greene (L’02) is the founder of Free the Hair, a movement that seeks to “celebrate and advocate the right of people of color to freely wear their hair as it naturally grows or in accordance to their personal choice.”

Sounds easy to do, except with societal pressures and natural hair discrimination, it is not. Greene was recently a featured speaker at Tulane Law School’s Homecoming Weekend program, where she addressed the obvious and not-so-obvious pressures. She said:

Greene, now a law professor at Drexel University,  also noted some of the high-profile cases in the past several years involving, most often, women and girls of color.  Two sisters were denied access to the prom because their hair was braided and deemed against the grooming code. An administrator at a Massachusetts early childhood program shaved the long locks of a biracial 7-year-old without parental permission, telling the girl her natural hair would ‘‘grow back straight.’’ An 8-year-old was barred from taking school pictures because her braided natural hair was adorned with red hair extensions.

“It is just a way to control women and girls,” said Greene. Her research traces these efforts back to slavery, and historic efforts to prevent black women from keeping their hair curly.

“Anything short of straight was deemed ‘unnatural’ and ‘unkempt,’ ” Greene said. “In the workplace, it’s seen as unattractive and unnatural, and too urban.”

She is working to change that stereotype. Greene’s extensive work in the field has made her a pioneering anti-discrimination law scholar. She has been quoted in the Washington Post, The New York Times, Teen Vogue and other news outlets examining stories of hair discrimination and the current cultural transformation of how natural hair is viewed.

While on a visit to New Orleans, she sat down with local morning show anchor Sheba Turk, who was targeted by viewers on social media after leaving her hair in its natural curls.

Greene has been an advocate who has devoted her professional life’s work to advancing, racial, color, and gender equality in workplaces and beyond. Her scholarship and public advocacy have generated civil rights protections for victims of discrimination in workplaces, schools, and public accommodations on federal, state, and local levels.

Her pioneering work in articles on “grooming codes discrimination,” persuasively argue that the systematic discrimination African descendants suffer when they wear natural hairstyles like afros, twists, braids, and locs, is unlawful race discrimination.

According to her Drexel University profile, she has coined two recognized terms in the field of labor and employment law - “misperception discrimination” and “grooming codes discrimination.” Her work in these areas has shaped the enforcement stance of the Equal Employment Opportunity Commission (EEOC), administrative law judges, federal courts, and civil rights organizations in civil rights cases. Notably, the 11th Circuit and Ninth Circuit Court of Appeals have endorsed Greene’s published definition of race as a legal authority on the social construction of race and as a practicable definition for constitutional decision-making respectively.

In 2019, she served as the legal expert for the California C.R.O.W.N. (Creating a Respectful and Open Workplace for Natural Hair) Act, the first statewide law in the United States to define race discrimination inclusive of discrimination on the basis natural and protective hairstyles such as twists, locs, and braids.