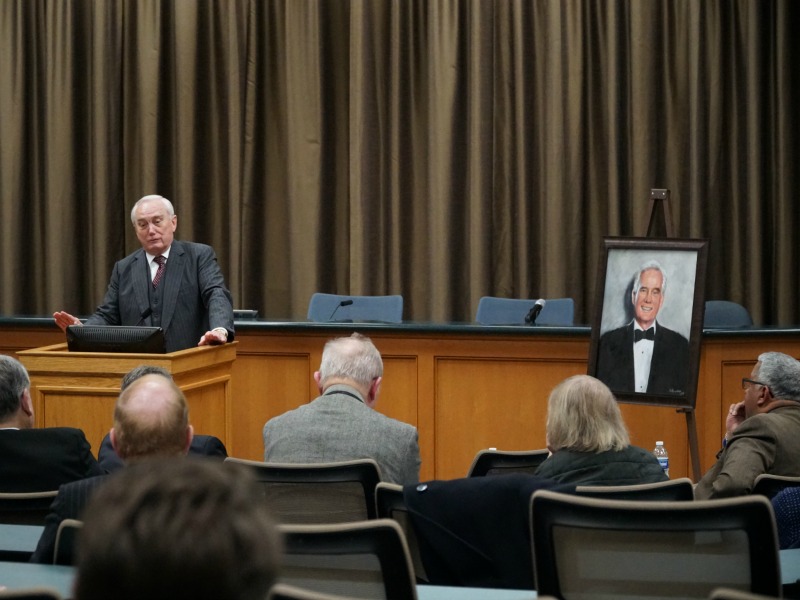 To him, it was a living thing, and more importantly, a conduit to help other human beings.

Murray (L’64), a prominent attorney and the co-founder of Tulane Law’s Trial Advocacy Program, was remembered by his dearest friends and family Jan. 30, in the institution that was his second home.

His work teaching hands-on courtroom skills, now threaded through almost every course in the law school, and his passion for helping others was the night’s theme.

One by one, his family and friends remembered the man who once cried uncontrollably when he couldn’t save a client from death row, and who brought to the firm Christmas party the wife and children of a client so they could collect presents. They recalled the passionate orator, the wise mentor, the savvy attorney, the big brother, the friend and the booming tenor voice that would not be contained at a party.

Murray died in September of 2017 and as Law School Dean David Meyer put it, “We will always be in Julian’s debt. He is gone but his vision and his voice fill the halls and every classroom in this school.”

His friend and law partner George Recile remembered Murray as deeply “ethically, committed to his clients.”

“He took cases and often didn’t care if he was compensated,” Recile said. “Above all else, it was about doing what was right and humane.”

Stephen Murray (L’68) had his own tumultuous early college years, uncertain about what he wanted to do. It was Julian who put his credibility on the line and asked a dean to give his younger brother a chance. “I went from being on probation to the Dean’s List in one semester,” Stephen Murray said.

It also was his brother who encouraged him to go on to law school. Stephen tried but after two years wondered if he wanted to continue.

“So he asked me to come down to (the courthouse) and I spent a day watching my big brother in court, and it was the most exciting thing I’d ever seen,” he said. “It led me to a long and successful career and it was because of him.”

Julian Murray’s son, Shawn (L’99), remembered his father’s most important lesson in explaining why even the guilty deserve a zealous lawyer: “No one should be judged by the worst thing they’ve done.”

He celebrated his father’s “larger than life” persona, hearing friends regale his father’s courtroom skills and his singing voice used at “almost every restaurant in New Orleans.”

Lynn Luker (L’82), a former student of Murray’s who would go on to become the co-director of the Trial Advocacy Program, recalled that Murray “changed my life.” She didn’t like law school until she took trial advocacy. “And suddenly, I found something that I liked and was good at,” Luker said.

By the time she finished law school, she had a job offer from a large law firm, which she credits to her time under Murray’s tutelage.

“Julian was my dear friend, my mentor. And he was real,” Luker said. “So, thank you, Julian.”

His colleague and friend, the Hon. Kern Reese, joined the Tulane Trial Advocacy program because Julian asked and told him, “You’ll be teaching the students, but you will learn, too.”

And he did. “I became a better lawyer teaching in the program with Julian,” Reese said. “I will never forget Julian Murray.”

Murray took cases no one wanted, and defended controversial clients, including an episcopal bishop who would go on to become a friend and counselor.

Bishop Joe Doss was arrested in 1980 during the Mariel boatlift for smuggling more than 400 Cuban refugees in a 112-foot, WWII submarine chaser. The Cubans were relatives of those in his congregation.

He hired Julian Murray to represent him. He remembered preparing closing arguments with him in a courtroom that showed immigrants arriving in America’s shores. He watched Julian practice, and begin to cry.

“At that moment, he knew those people,” said Doss. “Julian loved the law as a system where he had a role, but just a role. He loved the law but more importantly he loved the people he represented.”

Shawn Murray said a remembrance at Tulane would have meant more to his Dad than his most prized award, when the Louisiana Bar Foundation named him Lawyer of the Year.

“He would have been deeply humbled by this,” Shawn Murray said.