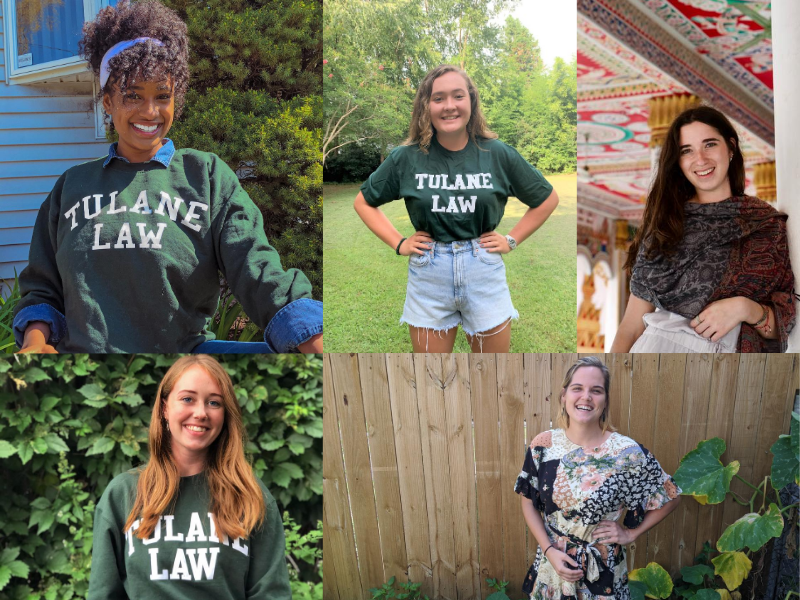 It was a tumultuous spring for Peace Corps and Fulbright volunteers as the global COVID-19 pandemic surged around the globe.

In almost every case, these volunteers were called home from international placements, and these life-changing international experiences were abruptly ended.  In some cases, evacuations happened so quickly, some left host families and newfound friends without a goodbye.  And, once home and with years-long plans upended, what would they do now?

Fortunately, some are arriving at Tulane this fall after the university announced an initiative to offer half-tuition scholarships to displaced Peace Corps and Fulbright alumni.  Five of them joined Tulane Law School this week. Each had a plan and a goal that abruptly changed. Now, the plan is law school here in New Orleans.

“We’re very pleased to welcome these extraordinarily accomplished individuals to Tulane Law,” said Dean David Meyer.  “Their international perspective and commitment to service are a perfect fit with Tulane’s distinctive identity and will enrich our classrooms and community.”

Here are their stories, in their own words: 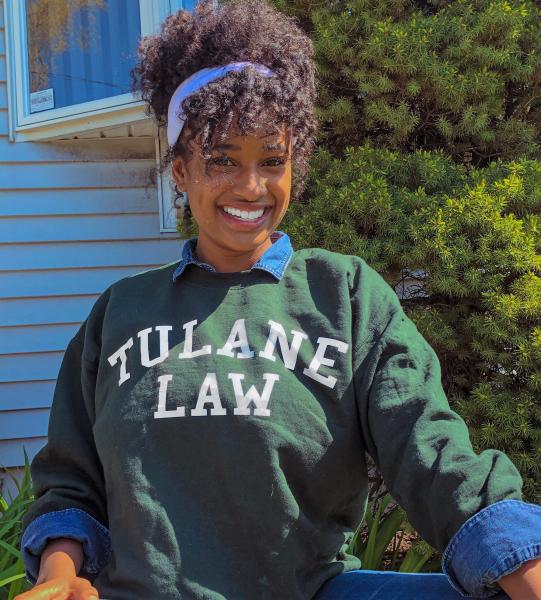 Chisholm was sworn in as a Peace Corps Volunteer, and spent three months training in Thailand. Thirty-six hours after she was sworn in, and a day before learning her permanent location, she was called home.

“I was completely robbed of my time in the Peace Corps — I had full intention of finishing out my two years and I loved the person I was growing into from everything I learned. COVID took from me a two-year experience but gave me a potential new family at Tulane.”

She chose Tulane Law because Louisiana is the only state in the nation that follows the Civil Law tradition (all others are Common Law states, although the Commonwealth of Puerto Rico uses both). Tulane Law teaches the tradition with some 30 percent of its students going on to pursue civil law careers in the state or around the globe.

On March 18 2020, I was evacuated from Thailand due to the COVID-19 pandemic. I was pulled from my service prematurely because of circumstances out of my control but in the short time I was there, I found what I was truly meant to be doing. I don’t know when I’ll be able to complete my service in Thailand, but what I do know is that my service as a global citizen cannot and will not end anytime soon. I applied at Tulane Law with the hopes of pursuing a degree in International Law because this is where my journey has taken me, it’s been what I’ve been working towards since graduating from . . . Rutgers University nearly two years ago. It's what I realized I needed when I parked my bike in front of my students' school. The mission of peace and friendship is something that the Peace Corps holds dear, but there is so much more work to be done; there is so much more work I can do. The next step in my journey is working on preventative measures to ensure that international peace is a thing of the present and future. I’m tired of taking a passive or reactionary approach; it is time to be active, which is why I have decided to undertake a law degree. 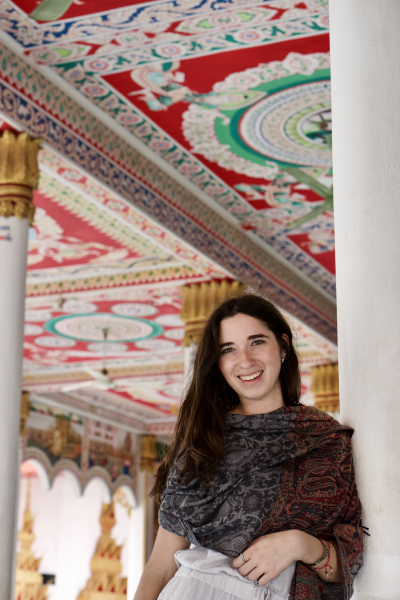 Knapp was in Luang Prabang when she began hearing about the virus, and noticed a dip in tourism in the normally busy community. Around mid-March, she was given a voluntary departure notice that allowed her to return home, but most of her cohort chose they would stay unless the situation escalated. They had no idea how quickly things would turn.

Here is what she told us about that experience:

Within a week of receiving the voluntary departure notice, the Embassy alerted the cohort we needed to depart for Thailand to return to the U.S. as soon as possible. I will never forget settling down at a happy hour with friends at my favorite street side BBQ spot, only to receive a phone call from my handler with the news. Thailand was going to be closing its borders to any non-citizen that did not have proof of negative COVID-19 status, and there were no tests available in Laos. At that point, traveling through Thailand remained the only available route from Laos to North America as other countries had already shut borders. It was time to go.

The next 40 hours were a blur. I got lucky and was able to book a flight to Bangkok the next morning and Thailand waited 24 hours to enact the new order. This left me with about 12 hours to pack and say a few goodbyes. I am still sad I did not have the opportunity to say goodbye to nearly all my students and colleagues. When I arrived in Bangkok, an emergency logistics coordinator helped me book a flight into NYC while I was waiting in Thai customs. I landed in NYC on March 22 and my family drove me back to Pennsylvania from the airport. The entirety of the journey was surreal; from the eerily empty airports to witnessing a traffic-free Manhattan. The day I arrived, our state went into lockdown and I contracted a probable case of COVID-19. In under two days, I went from living across the globe to being in isolation at my parent’s house.

Being a Fulbright grantee was certainly a highlight of my early 20s and I'm beyond grateful for the seven months I had in Laos. Reflecting on my departure, I am struck by the irony of my program being terminated due to the assumption that Laos would be unable to cope with a pandemic while Laos PDR has about 20 reported cases and the US has five million. This sentiment led me to lean into many of the common critiques of Fulbright such as how it and similar programs often perpetuate the notions of white-saviorism and American exceptionalism and my own role in contributing to these issues. I feel fortunate to have had this time to reflect following my grant and look forward to getting involved with the local Fulbright Alumni Association and being the change from within as the program emerges from this pandemic era. 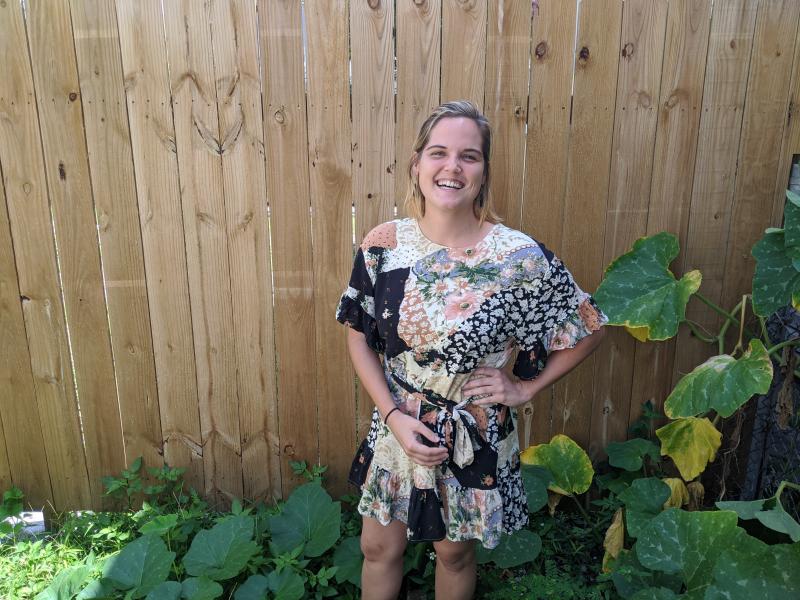 Matthews was in the Peace Corps for a year and a half, assigned to Benin, in West Africa. Having done her undergraduate in New Orleans, she was anxious to return here and explore environmental advocacy. She wants to work in environmental justice in the Gulf South, and she missed New Orleans.  “I love New Orleans and have wanted to move back ever since I left.”

When I joined the Peace Corps in September 2018, I brought the lessons I learned from my time in New Orleans and Cincinnati to Benin. My self-sufficiency and ability to dive into a new place, its culture, and people went a long way in helping me weather the many challenges of the Peace Corps. …Unfortunately, after a year and a half working with my new community, I was forced to leave due to the global evacuation of Peace Corps volunteers during the COVID-19 pandemic. Though it was incredibly disappointing to leave before my work was finished, I will be forever grateful for all the incredible people in my Beninese community that opened themselves up to me and gave me the space to do the same. I am confident that the projects we started together will continue even though I'm not there because of their commitment to building a stronger community through small-scale change. 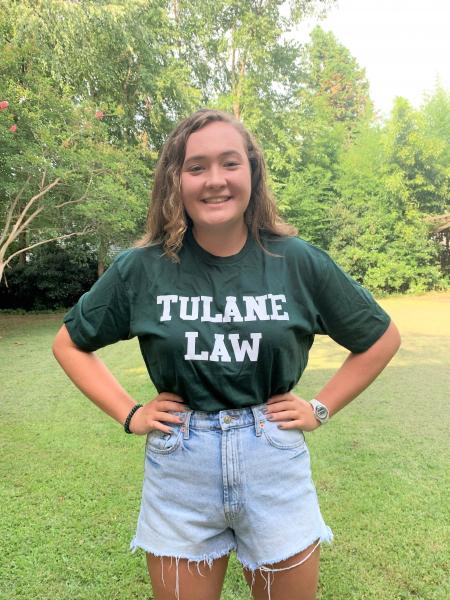 Rhodes College – Bachelor of Arts, Urban Studies, with an emphasis in urban and community health

Perlis was in Morocco for seven months before she was called home. She had been thinking about law school, and considering her next steps. She knew she would come home to New Orleans, and to help her city evolve into the best place that it can be for all New Orleanians.

If I had to describe my Peace Corps Service in one experience, it would be drinking tea. Though I cannot tell you how many cups of tea I drank, or in how many Moroccan homes I drank them in, I can tell you that as I reflect on my time in Morocco these more personal memories are most reverent. I like to think of the amount of tea I drank as symbolic of my community integration. As my language skills improved and the conversations flowed, so did the tea. I built relationships with families outside of the classroom, and began to realize that Morocco was starting to feel like home. If I had known I was days away from being evacuated, I would have accepted the fourth or fifth cup offered and stayed through the night, exchanging ideas with the Moroccans whom I had grown to call my friends and family…..As I continued to exchange ideas with various Moroccans in my community, I found that my passion for public service and social change was growing. I started to dream of a career through which I could help the country that I love to exceed the expectations of immigrants and other international citizens who admire it so deeply that they would give up stable lives just to be able to call themselves American. I started researching policies and Supreme Court rulings that established precedent for the inner workings of the United States, and comparing them to the beliefs that were held by Moroccans whom I loved - continually finding myself shocked by the differences between the two. In essence, the idea that I had of attending law school before moving to Morocco was completely solidified by a yearning to help our country live up to its reputation.” 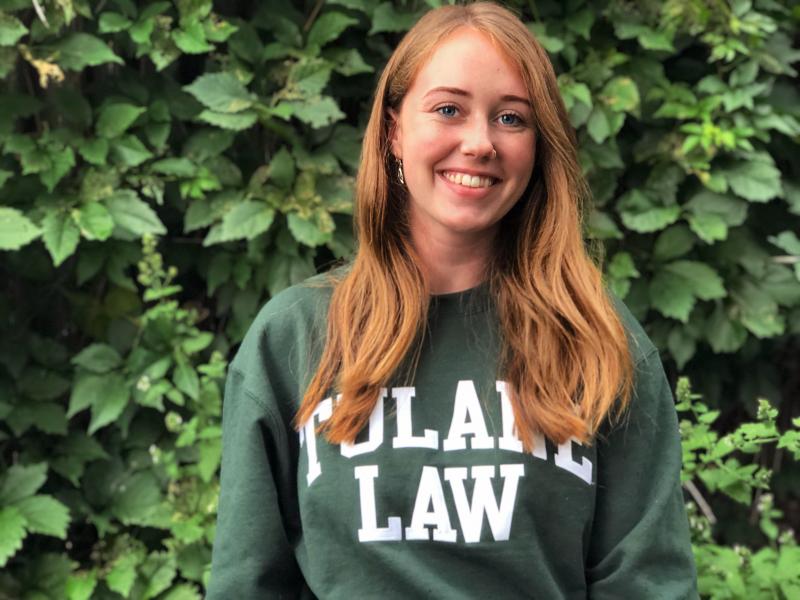 University of Denver: Bachelor of Arts, International Studies and Spanish

von Kleydorff was working in Ecuador for 10 months as a youth and families volunteer before she was evacuated. Leaving the country was not in her plans, so she launched what she calls an unorthodox search for her next steps, but which was probably kismet. “I was immediately drawn to the welcoming atmosphere of Tulane,” and the sense of community she saw in the law school.

In less than 15 hours, I managed to pack up all of my belongings, and share a hasty, emotional farewell to my host family, my beloved extended family and some of my students in the rural fishing village of Machalilla, Ecuador.  . In that tiny coastal town, my fervor for education, advocacy, lesson planning, and, of course, the beach swelled. My weeks were spent juggling my twice daily art classes with a youth literacy project and developing art-based leadership curriculum for local schools … Each day was a new moment of discovery for me. I truly believe that the students I directed taught me more about the importance of patience, imagination, and curiosity than I was able to teach them. By February, I had made the connections to implement an art leadership curriculum in two local schools at the start of the new school year. Needless to say, the unknown of the humid Ecuadorian coast had warmly welcomed me and accepted me as its own. My 10 months in Ecuador confirmed my dream of youth education advocacy and taught me the importance of community.