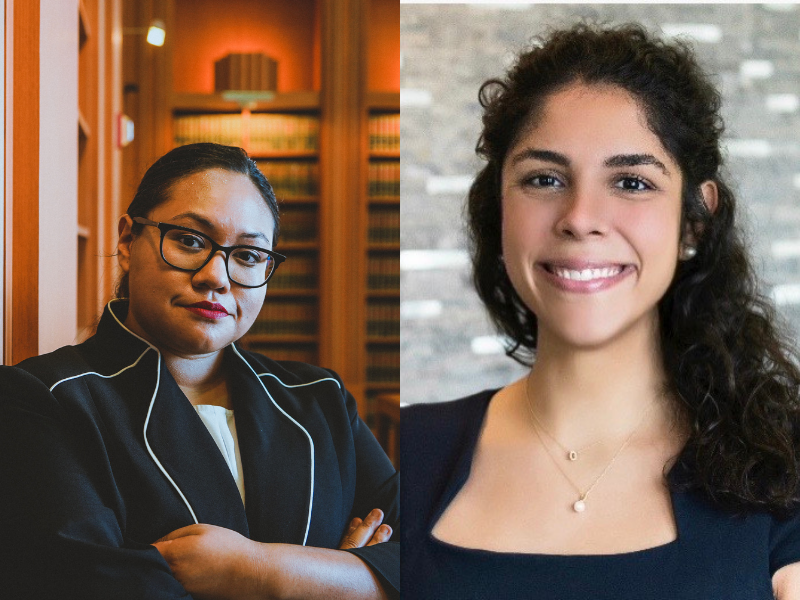 Trinidad Reyes (left) and Gabriela Cruz (right), both third-year law students and student-attorneys in the Immigrant Rights Clinic, were able to secure their client's release from ICE detention after proving he was in need of urgent medical care.

Law students in Tulane’s Immigrant Rights Clinic may have saved the life of their client Luis Nuñez Saavedra by carefully listening to his story and taking quick action to win his release from detention.

Third-year law students Gabriela Cruz and Trinidad Reyes paid attention when their client, a Cuban immigrant detained after requesting asylum at the southern border, told them he had serious health issues and had been seen by a doctor while in the custody of U.S. Immigration and Customs Enforcement (ICE) after suddenly collapsing.

That revelation led the two to review Saavedra’s medical records as part of their request for his “parole,” or release, while working as student-attorneys in the clinic this fall. They learned that their client not only saw a doctor while in custody, but that ICE had neglected to bring him to a board-certified cardiologist within 24 hours as required by the physician.

“These young women are now part of my family and I don’t see them as students. The way they carried themselves, with so much professionalism, compassion and love… it is something I will never forget."

“He absolutely could have died,” said Cruz, adding that she and Reyes were fortunate that the client – who suffers from atrial fibrillation -- was persistent in asking for medical care, attentive to the severity of his new diagnosis, and proactive in seeking help with his case. His condition causes him to have a rapid heart rate that increases the risk of stroke and heart failure.

“His own advocacy made a huge difference” Reyes said.

As of mid-2019, Louisiana housed nearly 9,000 immigrant detainees in 11 prisons across the state, just as the state sought aggressive measures to reduce prison population. Under controversial immigration policies by the Trump administration, Louisiana is home to 15 percent of the total detainees nationwide, second only to Texas. While nationally the numbers of those detained have decreased in the past several months, thousands are still being held in various facilities throughout the state.

It is an incredibly difficult environment for Louisiana immigration lawyers, who rarely see their clients released while awaiting hearings on their cases, even those with no criminal records or who broke no U.S. immigration laws in seeking asylum, like Saavedra. And, it is even harder for detainees, most of whom have no access to attorneys. Saavedra had previously submitted two requests for release, without the assistance of an attorney and before receiving this diagnosis. Both requests were denied.

Clinic Co-Director Prof. Laila Hlass explained that Saavedra’s situation is far from unique: “Louisiana is at the center of a national access to justice crisis for detained immigrants, which is why our clinic is committed to training a new generation of attorneys who are ready to meet these urgent and growing needs.”

Cruz and Reyes reviewed ICE’s medical records as part of their case after Saavedra told them about his health issues. The students combed through the health records from the agency and confronted them with the doctor’s note requiring an appointment with a cardiologist within 24 hours. More than two months later, he still had not seen a cardiologist and ICE did not provide a timeline for when he would be able to do so.  Then, as the students were sending in their request for his release, the agency notified them they were setting him free.

“And that was hard, too, because they literally released him within minutes of calling us, and they left him outside (of the prison),” said Reyes. “The prison is in the middle of nowhere. His family was hours away and he had to sit out there and wait for them for hours. The system we have currently is extremely unkind.”

“These students did fantastic work connecting with Luis, building trust, and showing careful attention to detail in every aspect of case preparation,” said Clinic Co-Director Mary Yanik. “They also showed deep respect for him and his family, staying in constant communication and always trying to give him as much information as possible so that he could advocate for himself and seek medical care while detained.”

In addition, Yanik said, the students secured letters from a physician – pro bono – in support of their client’s release because of his medical vulnerabilities.

“Medically vulnerable people absolutely should be released from detention because congregate settings like jails and prisons are life-threatening in a pandemic,” Yanik said. “These students found the silver bullet – ICE’s own records show a physician ordered that Luis see a board certified cardiologist within 24 hours of this diagnosis. And ICE did not provide that basic medical care for months, endangering his health.”

For Saavedra and his family, “parole” means he can apply for a green card under the Cuban Adjustment Act and eventually, be on a path to citizenship.

“These young women are now part of my family and I don’t see them as students,” Saavedra said from his home in Houston. “The way they carried themselves, with so much professionalism, compassion and love… it is something I will never forget. I don’t know how they could have any higher standard than how they treated me, and managed my case.”

In fact, he said he misses them. “I will definitely want to stay and touch because if they need me ever, I will be there.”

Tulane launched the Immigrant Rights Clinic this fall with a seed gift by the Silicon Valley Community Foundation to prepare students to meet the rapidly growing crisis in access to justice for detainees. The new clinic comes as Louisiana is playing an increasingly central role in the nation’s immigration crisis and as Tulane Law is expanding skills-training opportunities for students.