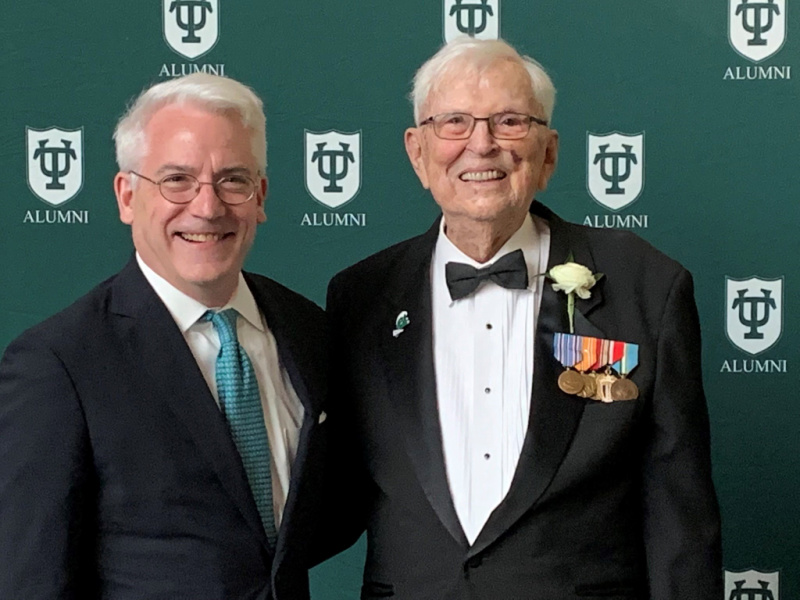 L-R: Law Dean David Meyer with Judge Thomas "Tom" Wicker (L'49) at the Tulane University Alumni Awards Gala in 2019. Wicker received the Scott Cowen Service Award in recognition for his extraordinary leadership and service to Tulane University and the public.

Wicker, whose life straddled two centuries that included the Great Depression, World War II, the Civil Rights Movement and the Saints’ only Super Bowl win, died Feb. 24. He was 97.

During his adventurous life, he was dedicated to Tulane, where he was twice an alumnus, to his community and to his family.

At the Tulane University Alumni Awards Gala in 2019, Law School Dean David Meyer presented Wicker with the Scott Cowen Service Award in recognition for his extraordinary leadership and service to Tulane University and the public.

“Judge Wicker lived his entire life in service to others and was a model of grace and professionalism,” Meyer said. “We could not be prouder of his example and his legacy.”

“There was no more devoted Tulanian than Judge Wicker.”

On the same day Wicker graduated from Tulane with a bachelor’s in business administration in 1944, he was commissioned by the U.S. Navy and assigned to the Lackawanna, a ship that took part in the Hollandia campaign, the Battle of the Philippine Sea, the invasion of the Philippines and was among the first to enter Tokyo Bay after the Japanese surrender.

Wicker returned to Tulane after the war, earning his law degree in 1949, and serving as Editor-in-Chief of the Tulane Law Review. He was a strong student, and was named to the Order of the Coif, a scholarly legal society.

After law school, he went on to serve as an Assistant U.S. Attorney in New Orleans before launching a private practice. In 1972, Wicker was elected District Judge for Louisiana’s 24th Judicial District, serving Jefferson Parish, becoming the first judge to sit in Division “H.”

Wicker was a leader outside of the law, as well. He was a longtime member of the Sugar Bowl Committee, serving as its president in 1987. He also was a founder of the New Orleans Saints’ Touchdown Club.