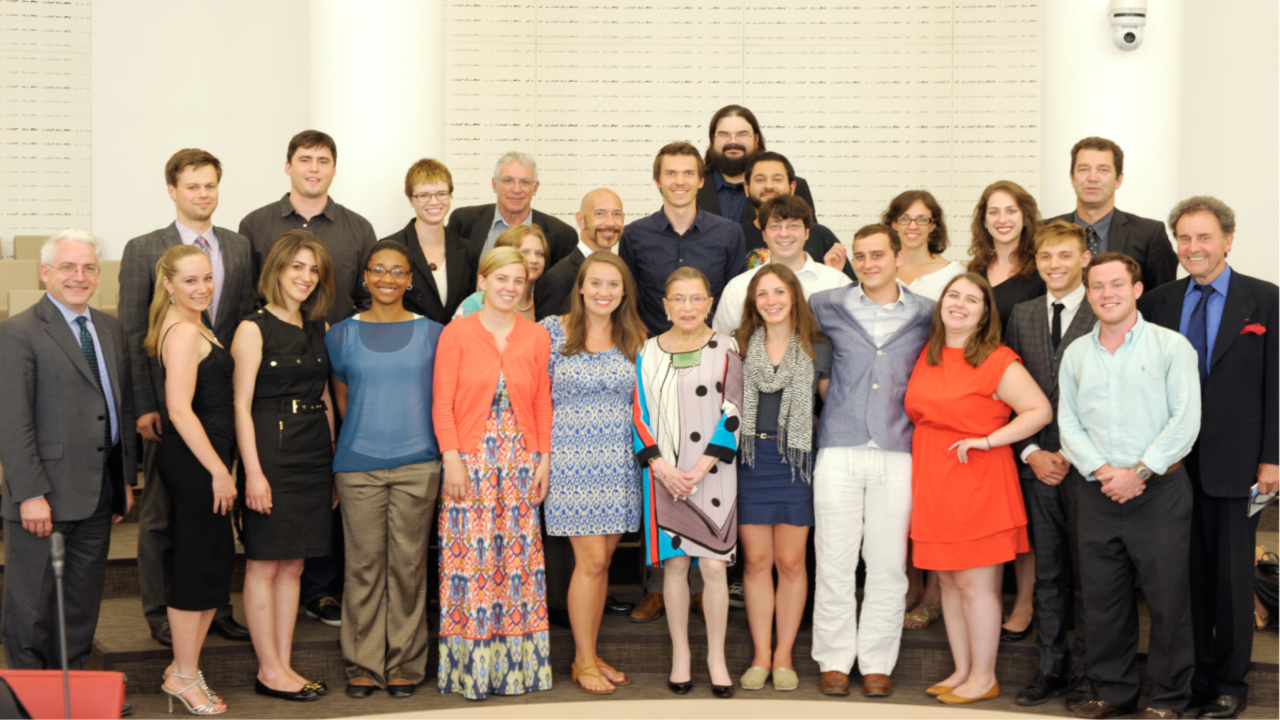 Justice Ruth Bader Ginsburg, center, surrounded by students and faculty in Tulane's Summer Program in Paris in 2014. That summer she not only lectured, but also headlined two alumni events and a roundtable discussion on women in the law.

While the nation is mourning the death of Supreme Court Justice Ruth Bader Ginsburg as a champion of equal rights for women and a cultural icon, some Tulane alumni and faculty are also feeling her loss as an extended member of the Tulane community. The Justice, they recalled, expressed an enduring fondness for Tulane Law School and regularly lectured, taught and otherwise gave her time to Tulane students, faculty, and alumni.

Over the years, Justice Ginsburg taught in at least three of Tulane Law’s summer-abroad programs, in Crete, Greece, and Paris.

Indeed, in her own memorial tribute to her Court colleague and friend, Justice Antonin Scalia, Ginsburg recalled that that she had followed Scalia’s recommendation in joining Tulane’s summer-abroad faculty and that she had found herself hospitalized in Crete as a result, with what turned out to be her first bout with cancer in 1999.

Dean David Meyer recalled that when Tulane first organized a group of Tulane Law alumni to be sworn in to the U.S. Supreme Court bar in 2012, Justice Ginsburg made a point to visit with the group privately afterward in one of the Court’s grand conference rooms and that she spoke of her bond with Tulane from teaching the university's students and engaging with Tulane faculty.  Whenever Tulane hosted similar swearing-in events in subsequent years, Ginsburg always took time to visit and speak with the group.

“She expressed her special fondness for Tulane and could not have been more generous spending time with Tulane alumni and students,” Meyer said.

In 2014, not only did Ginsburg teach in the law school’s summer program in Paris, she taught and headlined two alumni events and a roundtable discussion along with Judge Margaret McKeown of the 9th Circuit Court of Appeals, on women and the law. More than 22 students and a handful of faculty joined Ginsburg that summer.

“She gave lectures to the students, attended glittering receptions in her honor, and gave a public lecture before a large audience of Parisian notables,” said Tulane Law Prof. Vernon Palmer, who directed the Paris program.  “Her devotion to the Tulane students and their deep interest in her exceeded every expectation. I vividly remember how awe-inspiring her lectures turned out to be, as when afterwards the students crowded around her at the podium, eagerly asking questions, excitedly talking among themselves and, of course, taking pictures.  It was an intellectual ferment that only Justice Ginsburg, in the quietest of ways, was capable of creating.”

Among the students in the program was Michael Bowen, a 2016 JD-MBA  graduate. He recalled that Ginsburg lectured a class on comparative constitutional law. She made the point that America’s Constitution was among the oldest in the world, and one that other nations had modeled.

“I still remember that she made the case that it was not far-fetched to cite the highest courts of others around the world to interpret some of our toughest constitutional questions,” said Bowen, now an international trade analyst. “She thought bigger about things than most people. She often suggested we look up and out to find answers to our toughest legal questions.”

Ginsburg’s relationship with Tulane Law School traces back to even before she became a judge. In 1977, when Ginsburg was a Columbia University law professor, she developed her theory of women’s constitutional equality in an early Dreyfous Lecture on Civil Rights and Civil Liberties at Tulane.  Her thesis, published in a Tulane Law Review article, “Sex Equality and the Constitution,” ultimately carried the day in reshaping the Supreme Court’s interpretation of the Equal Protection Clause.

In her remarks that year as the Dreyfous Lecturer she outlined the state of gender-based rights in America, starting with the founding fathers and ending with the Equal Rights Amendment. As in life, she was methodical and direct in her arguments.

“The ERA, to conclude, is not designed to force alteration of those preferring traditional roles, nor is it merely symbolic,” she said at the time. “It is a signal, phrased in the grand, general style of most of  the Constitution’s human rights guarantees – a signal that so far as laws and officialdom are concerned, males and females, our daughters and sons, should be free to grow, develop, choose and aspire in accordance with their individual talents and capacities.”

Three years later, President Jimmy Carter would appoint Ginsburg to serve on the U.S. Court of Appeals for the District of Columbia, and later, in 1993, President Bill Clinton would nominate her to her seat on the nation’s highest court.

During those years, Ginsburg’s opinions and dissents made history on gender and race equity, among other issues. In 1996, she authored the court's opinion in United States v. Virginia, which struck down the Virginia Military Institute’s male-only admissions policy as violating the Equal Protection Clause of the 14th Amendment. Conversely, she was a dissenter in the famous 2007 case, Ledbetter v. Goodyear, where the court, rather than rule on gender-based workplace pay discrimination, instead interpreted the case as being about the statute of limitations, even when a woman did not know she was being paid less than her male counterparts. Her scathing critique of her colleagues is credited with inspiring President Barack Obama to pass the Lilly Ledbetter Fair Pay Act in 2008.

Tulane political science Prof. Sally Kenney, who is Director of the Newcomb Institute and an Affiliated Professor with Tulane Law School, met Ginsburg on several occasions in her work with gender issues and in studying women in law.

“Justice Ginsburg always was so precise in her arguments, like wielding a scalpel,” Kenney said. “She was a clear and powerful analyst and always right on point.”

Kenney recalled she and Ginsburg were panelists at a women in the judiciary conference some years ago. The two were able to have dinner together and discuss legal issues of common interest.

“It was incredibly meaningful to sit and have dinner with someone who had done so much in my field of interest,” Kenney said. “I have read so much about her and saw how she was repeatedly dismissed throughout her career. Yet she and others like her continued pressing on, and that is what is inspiring to me. They kept hope alive.”

The two would occasionally correspond, as was the case a few years later, when Kenney sent Ginsburg something she had been writing.