'Juvenile Lifer' gets parole (and a hug) thanks to Tulane clinic 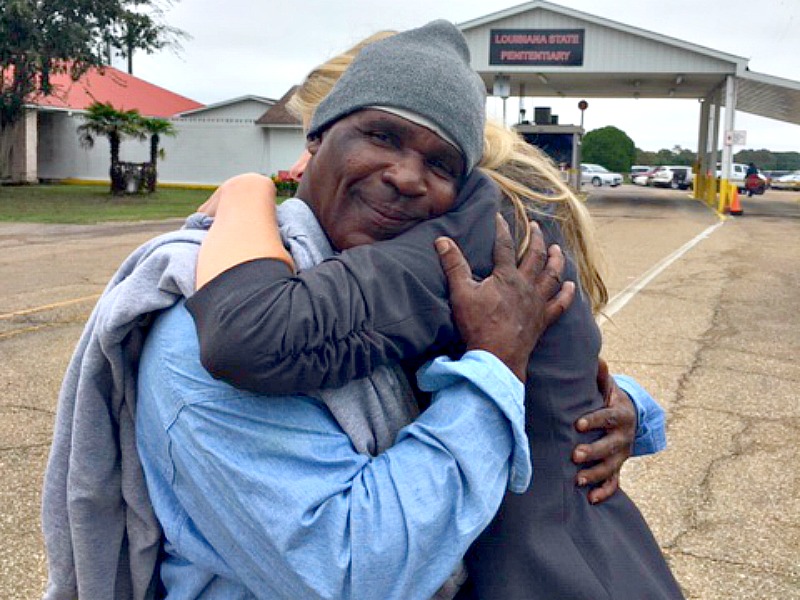 In the photo, Barry Williams’ face says it all: After decades behind bars, he’s smiling and embracing – with a big, hefty hug – his attorney of six years.

Williams walked out of  the Louisiana State Penitentiary at Angola on Thursday free, 41 years after he was convicted at the age of 17 of second-degree murder in a botched robbery that left an elderly woman dead.

His attorney, Tulane Criminal Justice Clinic Director Katherine Mattes and student attorneys had been for years arguing that changes in constitutional law should entitle Williams to be considered for parole.

“That hug…” said Mattes, clearly elated hours after Williams’ release, “that was some hug. That’s the best hug I’ve ever had.”

Mattes said Williams was among the test cases to make retroactive a Supreme Court decision giving parole to so-called “juvenile lifers” – often sentenced in their teen years to die in prison for their crimes.

Louisiana has the third highest number of juvenile lifers, with some 300 inmates convicted of murders they committed as teens. In 2016, the Supreme Court ruled that young offenders deserved a chance at rehabilitation, and only in rare and serious cases should life-without-parole sentences be handed down. But Louisiana had no laws to implement the ruling.

Mattes and Tulane clinic students argued in multiple state courts and ultimately appealed to the U.S. Supreme Court, which agreed that Williams should be granted a second chance.

By 2017, the Louisiana legislature passed laws giving these inmates relief with new sentences that offered a path to parole and set out the process to attain it. Tulane’s clinic helped shape the legislation, Mattes said.

In October, clinic student attorneys Colin Fitzpatrick and Ryan Niedermair, both in their third year of law school,  argued before the state parole board about Williams' rehabilitation. The board agreed to Williams’ release – but the process of leaving a state penitentiary takes weeks.

Mattes, at another parole hearing at Angola Thursday morning in an unrelated case, knew Williams would be released midday.  She also knew his family – including his 84-year-old mother – didn’t have the means to drive up and meet him at Angola’s gates.  So she waited.

“I could not let him walk out of there and not see someone he knows,” Mattes said. “After 41 years, there should be someone you know waiting for you.”

A case worker snapped a cellphone photo of Williams embracing Mattes outside of the prison. Posted late Thursday on Tulane Law School’s Facebook page, the hug almost immediately generated thousands of views, and dozens of likes and shares.

Mattes, who’s worked in criminal law for 30 years, has a reputation of being tough, getting results and never giving up on cases. With law students front and center, she has testified and advocated before the state legislature to rewrite laws that continue to aid Louisiana’s efforts at criminal justice reform.

For her, Thursday was a day of victories. She and student attorneys Jansen Owens and Laura Frost, both third-year law students, sought and received parole for another juvenile lifer since the Supreme Court ruled on these cases.

“It was an emotional day, but a good day,” Mattes said.