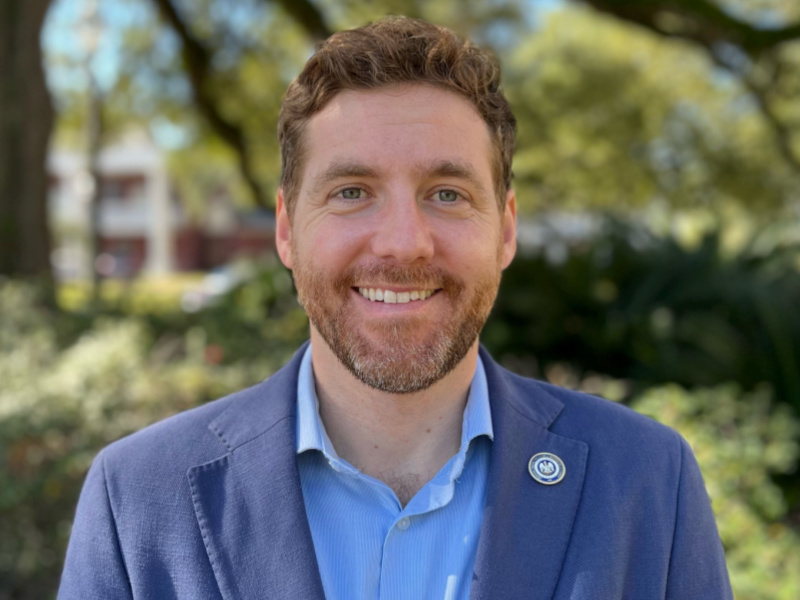 Back in 2013, Harry Vorhoff was a third-year Tulane Law student who knew he wanted to practice environmental law but was unsure of where he would land after graduation.

That spring he was the Speaker Chair of the Environmental Law and Policy Summit, the law school’s premier conference in the field – where Vorhoff met his future boss and mentor, the head of the state’s Land and Resource Management section of the Louisiana Attorney General’s Office.

The rest, as they say, is history.

“I wholly endorse public service,” he says. “It’s such a great way to gain experience and be in the thick of things, so to speak. I just cannot say enough good things about working within the state.”

Vorhoff took on the monumental task of getting a group with widely diverging views – in a state with a Republican-controlled legislature – to agree to action regarding climate change. Under the executive order that created the task force, Vorhoff’s job was to find common ground to reduce greenhouse emissions. The 24 stakeholders came from many different industries and interests -- oil and gas executives, environmentalists, scientists and community leaders, among others.

“We all recognized we needed to do something and do something on a big scale,” said Vorhoff. “And we knew we could not let perfect be the enemy of good. So, we focused specifically on greenhouse emissions and reached a consensus on 84 actionable efforts that would lead to reductions.”

The Climate Plan received a unanimous vote, in large part because stakeholders could include dissents in areas they disagreed with, and much of it is voluntary. Still, it was an acknowledgment that Louisiana is “the canary in the mine” said Vorhoff, facing some of the worst impacts of climate change.

“The approach was really to build a big tent to bring everyone together, and just as we’ve done with the state’s coastal protection and restoration program, we wanted to see all of these stakeholders be part of the solution,” said Vorhoff.

Vorhoff’s interests have been firmly rooted in environmental law and policy from his first days of law school. A New Orleanian through and through (he went to Ben Franklin High School), he took off for the northeast and received his undergraduate degree in history at the University of Pennsylvania. He arrived at Tulane Law a year later after working as a paralegal in a private firm.

In law school, he couldn’t wait to choose his own coursework, and by his second year, he was a regular in Professor Oliver Houck’s classes.

“I took four of them – as many as I could, and really fell in love with environmental law when I took Houck’s natural resources class,” he said.

He called his law school experience “fantastic” and the camaraderie of the law school unique. Once he graduated, he did a two-year stint as a Senior Research Fellow at the Tulane Institute for Water Law and Policy working with Professors Mark Davis and Chris Dalbom.

“Mark and Chris just let me run and take on as much as I wanted to as it related to water law,” said Vorhoff. “It was such a great atmosphere working in such a collaborative way.”

Vorhoff was a perfect fit for the Institute, said Davis.

“We knew Harry would do great work when he came on board but we weren’t sure just what that might look like,” Davis said. “Every fellow brings something different and no two want the same things from it.  Harry used his time with us to build the relationships and expertise that he now uses every day.   Whether they know it or not, the people of our state are very fortunate to have Harry in their corner.”

Once he landed the position with the state Attorney General’s office, his water law experience came in handy. He worked on a lot of water law cases, as well as those involving mineral rights, land ownership and more, arguing cases at the local, circuit and state Supreme Court level.

Throughout the years, he’s worked with the Water Law institute and with the Center for Environmental Law, which Davis leads, to collaborate on legal issues facing the state, or seeking out research his office can use as they move coastal policy forward.

He gives a lot of credit for his success to Davis and Houck’s influence and mentorship, of course, but also to the law school as a whole.

“It’s a place with such a great vibe – academically rigorous but with a sense of purpose and camaraderie and a strong focus on public interest,” said Vorhoff.

“Through Houck’s courses, working alongside Mark Davis, and through programs like the Summit, going on the canoe trips – all of this really led me to where I am now.”