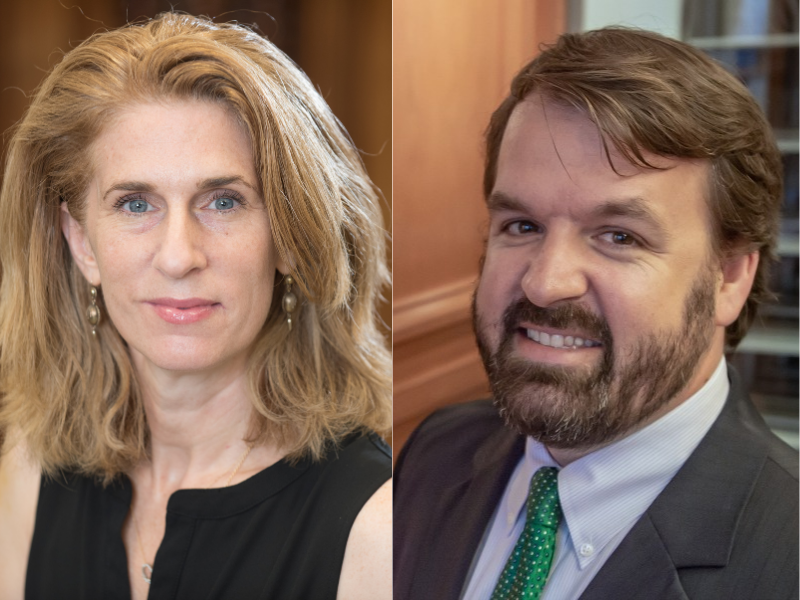 The new Deputy Directors are Prof. Elizabeth Livingston de Calderon, who will help direct the Environmental Law Clinic, and Prof. Timothy McEvoy will work as deputy in the Domestic Violence Clinic.

Both Livingston de Calderon and McEvoy have been long-serving clinical instructors in their respective clinics.

“The appointments recognize their exemplary work with students and their substantial leadership within their clinics,” said Law Dean David Meyer.  “We’re very fortunate to have them at Tulane.”

Livingston de Calderon joined Tulane’s Environmental Law Clinic in 2006 after directing the Graduate Studies Program and teaching Legal Research and Writing. She is known for her extensive expertise in state environmental, administrative, and public access laws, and her deep understanding of the Clean Water Act and other federal environmental and administrative laws.

“Our staff and students face many challenges in our work on behalf of Louisiana communities and individuals battling environmental threats,” said Lisa Jordan, Director of the Environmental Law Clinic. “It's a big job, and we’re all lucky to have Liza's deep experience in both education and advocacy to draw on in an even greater capacity now as Deputy Director.”

Before joining the law school, Livingston de Calderon was a commercial bankruptcy lawyer in New York and Detroit.

She received her JD at Tulane where she was associate editor of the Tulane Law Review. She holds a Master of Arts degree in Classical Languages also from Tulane and a Bachelor of Arts from Connecticut College.

McEvoy has been with the Domestic Violence Clinic since 2016. He is recognized as a gifted instructor of student attorneys in the skills of advocacy, court preparation and legal strategy. He joined Tulane Law after five years serving as a staff attorney with Southeast Louisiana Legal Services in New Orleans. At SLLS, he litigated hundreds of family law matters involving domestic violence in both trial and appellate courts and trained social workers, police officers and lawyers on Louisiana’s domestic violence and sexual assault laws.

A mentor with the ability to engage major organizations in the domestic violence arena across the New Orleans region, McEvoy also successfully petitioned for a change in the Code of Civil Procedure to allow for use of affidavits in lieu of testimony in obtaining a judgment of divorce under Article 103.5.

McEvoy’s early legal career included two years in private practice in New Orleans, specializing in commercial litigation and as lead attorney overseeing a team of lawyers and AmeriCorps staff assisting over 500 low-income clients across multiple jurisdictions in response to the BP Oil Spill.

He received his JD from American University and a bachelor of arts from Pomona College.