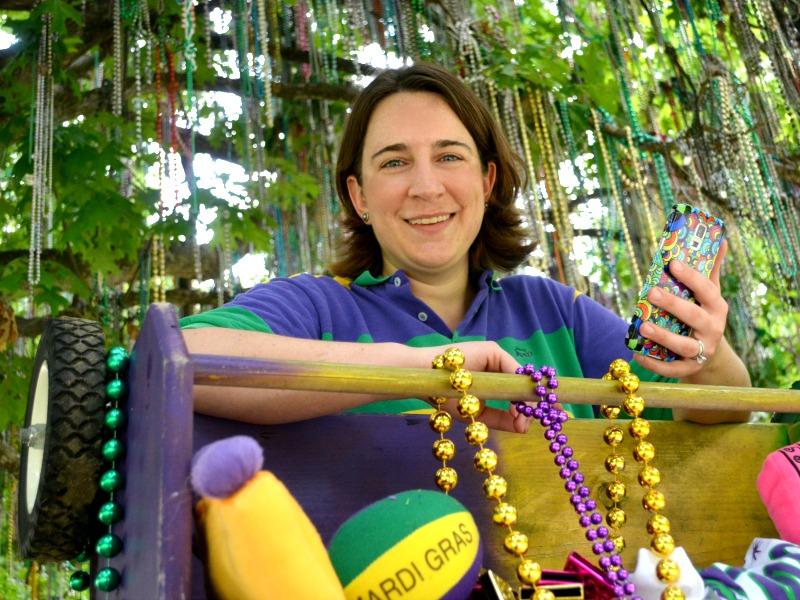 Law Prof. Sally Richardson is well-known for her walking tours of New Orleans during Mardi Gras season, which she explains to students in terms of property law and the city's customs of practicing centuries-old English rules of private property. (Photo by Sally Asher)

She’s also known for having an impressive throwing arm that can send a box of Girl Scout cookies flying to the very back of a classroom and into the hands of deserving students (We’ve seen it. There’s video.)

Now, Tulane Law Prof. Sally Richardson is being honored by Tulane University with its highest teaching honor – the President’s Award for Excellence in Professional and Graduate Teaching. Richardson, the A.D. Freeman Associate Professor of Civil Law, is and engaging and dynamic educator, beloved by her students who say she inspires them with her creative teaching methods, high standards and genuine concern for their professional development.

The all-campus award will be formally presented to Richardson at the University’s Unified Commencement on May 18.

“Prof. Richardson is an extraordinarily gifted and dedicated teacher and is richly deserving of this honor,” wrote Law Dean David Meyer.

“Besides the superlative assessments of her classroom teaching from faculty peers and students alike, Sally continually looks for opportunities to help students outside the classroom as well, whether offering career advice, assisting students leading the Civil Law Society, or by offering her now-famous Mardi Gras walking tour of property law principles on the neutral ground.”

Richardson, who has been at Tulane seven years and was awarded tenure in 2018, has built an impressive record as a nuanced and thoughtful scholar of comparative property law and is an international leader in her field.

She teaches some weighty subjects: Civil Law Property I & II, Common Law Property, Community Property, a Property Theory seminar and an undergraduate course called Theory of Property Honors Colloquium. In other hands, these subjects could be dry and dense, “requiring students to master notoriously difficult legal doctrines dating back to Roman and early Common Law,” Meyer wrote in his nomination letter. “In Professor Richardson’s agile and creative hands, these subjects inspire students to embrace the challenge and come back for more.”

Many of Richardson’s students agree, based on course evaluations.  “You are an inspiration and an incredible professor,” wrote one. “Professor Richardson is straight-forward, approachable, brilliant,” said another. And yet another said, “This is my third time having a class with Professor Richardson and quite frankly, she might be the best teacher I’ve ever had. Ever.”

Outside the classroom, Richardson is generous about helping students. She’s known for offering career advice, commenting on drafts for Tulane Law Review articles and supervising independent research projects. In what has become an annual tradition, she hosts first-year students and the Civil Law Society on an annual walking tour Uptown where she teaches them how local parade customs  -- staking out spots on the neutral grounds using tarps and ladders, for example – are rooted in ancient property law notions, bringing property theory to life. 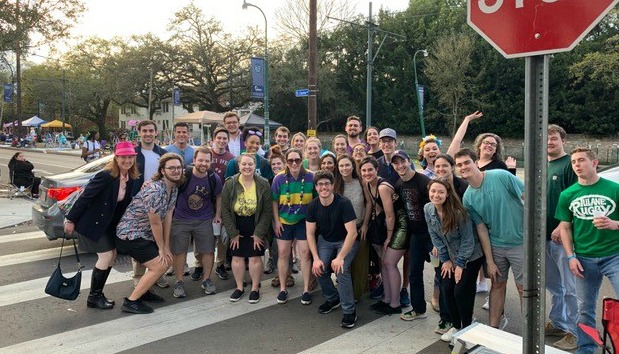 Richardson writes frequently on the PropertyProf Blog, where she covers topics ranging from the presidential candidates’ perspectives on eminent domain to the property law and customs that govern Mardi Gras. She even explained a Roman property law word that tripped up a competitor in the Scripps National Spelling Bee. And recently, she posited that intellectual property law has played a significant role in building Girl Scout cookies into the country’s best-selling cookie empire. That lesson livened up her law school classes – and a video lit up the law school social media accounts -- as she tossed boxes of cookies to students whose classroom contributions merited a reward.

Internationally, Richardson was elected secretary of the Association of Law, Property and Society (ALPS) for the 2018-19 year at its annual conference in the Netherlands, an organization that brings together more than 150 international property law scholars annually. She has served the organization’s board since 2015 and has helped organize its annual conferences since 2014.  In 2020, she and Tulane will host the conference.

In addition to her executive leadership role at ALPS, Richardson served until 2016 on the executive board of the American Society of Comparative Law’s Younger Comparativist Committee. As the 2015-16 Gordon Gamm Faculty Scholar, she organized the Younger Comparativists’ annual conference, hosting more than 100 scholars from across the world at Tulane.  In 2017, she was elected the Parliamentarian for the American Society of Comparative Law.

Richardson’s work has been published in the American Journal of Comparative Law, the North Carolina Law Review, Tulane Law Review and others.  In 2015, her scholarship was selected for the prestigious Yale/Stanford/Harvard Junior Faculty Forum.

She helped start a Federal Bar Association student chapter at Tulane and has played a leading role in expanding and energizing the civil law program. The Class of 2015 chose her to receive the Felix Frankfurter Distinguished Teaching Award, the Law School’s highest teaching honor.

In winning the President’s Award for Excellence in Graduate and Professional Teaching, Richardson will join a host of law school colleagues who have previously won the prestigious award, including Professors Martin Davies, Gabe Feldman, Jancy Hoeffel, Keith Werhan, and Tania Tetlow (now President of Loyola University in New Orleans).

“The law school is proud to have a strong tradition of teaching excellence,” Meyer said, “and Sally Richardson is plainly one of our finest.”