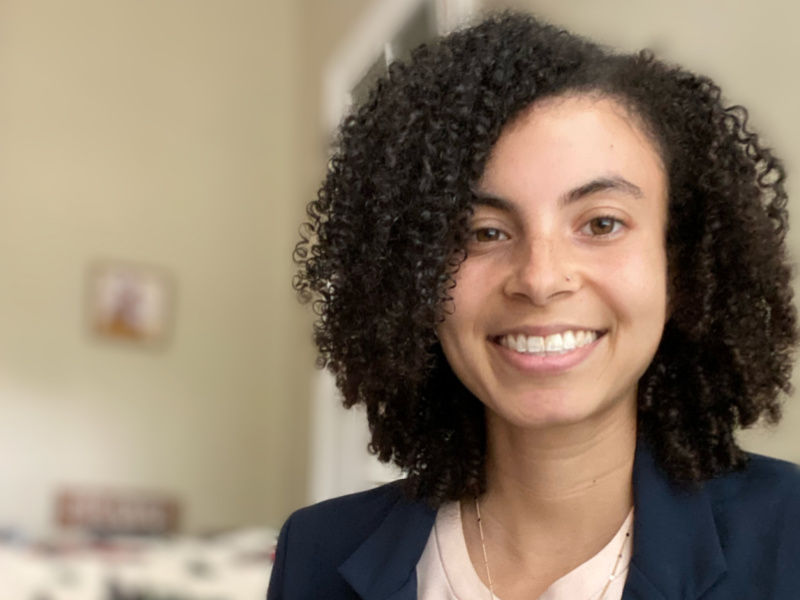 She spent time at Tulane Law researching how often Black families have historically lost land and property under systemic legal loopholes that denied them generational wealth.

Mikayla Mangle (L’22) parlayed her law school research into an Equal Justice Works Fellowship, one of the most prestigious and most competitive post-graduate legal fellowships in the country.

“As a mixed-race woman from the south, minority land ownership is important to me,” she said. “My ancestors were not allowed to own property, but instead were property. Through this fellowship, I plan to address the racist history of the American legal system.”

Mangle competed against almost 285 other applicants from 45 law schools around the country to be selected for the honor. The Class of 2022 Fellows will work at 76 legal services organizations across 20 states, Washington, D.C., and Puerto Rico. The 81 sponsors this year include 31 leading law firms recognized in the Am Law 200 and 25 Fortune 500 corporations.

Mangle will work with the Center for Heirs Property Preservation in South Carolina, where she will represent clients and educate members of the community on heirs’ property issues to help underserved communities build generational wealth through land and property ownership. Her Equal Justice Works Fellowship is funded by an anonymous supporter.

“When an individual dies without a will,” said Mangle, “families who inherit the land lack a clear title, which developers then use to their advantage to purchase the land, often without the knowledge of all the family members.”

Heirs’ property disproportionately affects African Americans and has resulted in a loss of vast amounts of land.

“During this fellowship, I hope to make land-loss and heirs property issues within Black communities more known to the legal community,” said Mangle.

Read more about Mikayla and her fellowship project.

Each year, Equal Justice Works selects a class of passionate public service leaders who have designed two-year projects in partnership with legal services organizations to help build sustainable solutions in the communities where they serve. These projects are funded by the generous support of law firms, corporations, foundations, and individuals.

“Mikayla’s commitment to helping underserved communities build generational wealth through land and property ownership is incredibly inspiring,” said Jessica Ryckman, Equal Justice Works Director of Fellowships. “We are honored to support her work at the Center for Heirs Property Preservation.”

Mangle said she worked with the Tulane Center for Environmental Law as a research assistant on the discrimination of minority farmers. Her research on property rights led her to design her project.

“The Tulane Center for Environmental Law really helped me in attaining this fellowship, she said. “My research there is what led me to want to become an Equal Justice Works fellow to work on heirs property issues and land loss prevention."

Mangle is no stranger to working in public interest law as a student, racking up a whopping 318 hours of pro bono work over her three years of law school, earning her the Jackson-Ryan Award just before graduation in May. The award is given to students who show exemplary commitment to assisting those in communities that don't have access to legal aid.

As a rising second-year law student, she interned for the National Sea Grant Law Center out of the University of Mississippi School of Law. There, she conducted legal research on how COVID-19 was disproportionately affecting tribal communities.

As a rising third-year law student, she interned at Pisgah Legal Services in Asheville, N.C. There, she worked with the elder law team where she assisted in drafting wills and power of attorneys for low-income, elderly Asheville residents.

During her second year of law school she worked with the TCEL on property rights issues, and also helped organize Tulane's first-ever food symposium.  She was a student-attorney during a portion of her second-and third-years of law school in the Tulane Environmental Law Clinic.