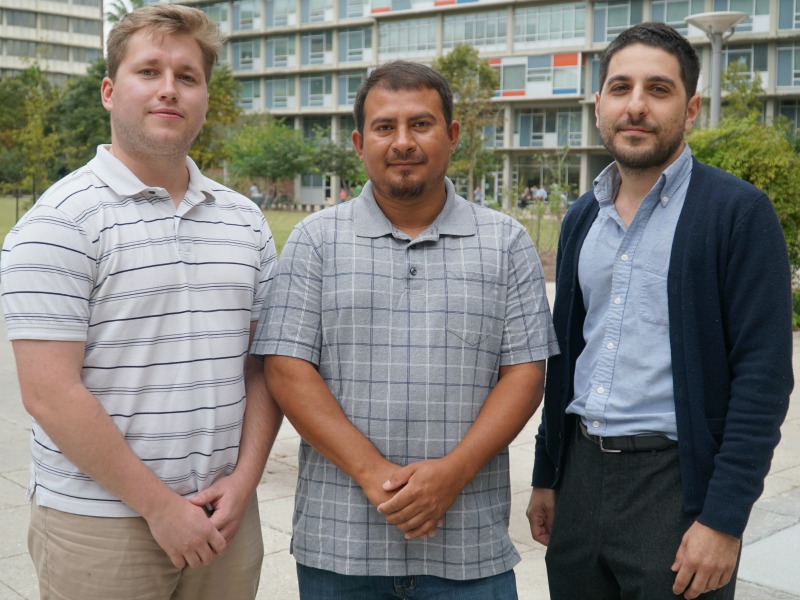 Jose Torres, center, an immigrant activist who lived eight months in a New Orleans church under a deportation order, is now free and seeking a path to citizenship with the help of Tulane third-year law students Nate Hall, left, and Marshal Garbus, right.

Students studying to be attorneys quickly learn that some cases stick with you forever. And sometimes, a client becomes a friend.

For third-year law students Mashal Garbus and Nate Hall, who represented a Salvadoran immigrant activist living in a New Orleans church under threat of deportation, the experience of getting to know a client – his family and his struggles – was as important as learning immigration law.

Over the course of several months as part of the Immigrants’ Rights Practicum course, the two worked with Jose Torres, a leader in the New Orleans Workers’ Center for Racial Justice’s Congress of Day Laborers, who remained in the local church for eight months fearful of being deported.  They saw him as hard-working father, concerned husband, a person making a better life for himself.

“I had this opportunity to advocate for Jose, and it was a struggle and often stressful,” said Hall. “I was struck by his story and I knew we had to do what we could to help. I got to know him and I felt connected to him and to the case.”

To Hall and Garbus’ delight, their efforts contributed to Torres’ reprieve recently from the 2017 order by Immigration and Custom Enforcement (ICE) to leave the country.

Hall, who is from Philadelphia, is considering criminal defense law or some aspect of immigration law once he graduates; Garbus, from New York City, is interested in workers’ rights issues.

Torres lived in sanctuary at First Grace United Methodist Church in Mid-City until June when ICE told his advocates that he could temporarily stay in the country as long as he did monthly check-ins with ICE while he applied for a “T Visa,” available to those who prove they were victims of a severe form of human trafficking.

“These young men, they know me,” Torres said during a recent visit to Tulane Law School. “They know my whole life now. It is very hard to open up your life and your heart to people but I knew they wanted to help me. And I am so grateful to them. God showed me his love through the people that helped me."

Last semester as part of the brand-new Immigrants’ Rights Practicum developed by Prof. Laila Hlass, director of experiential learning, eight students worked in pairs to represent five immigrant leaders involved with the New Orleans Workers Center for Racial Justice in preparing various visas available for those who have been victims of serious crimes or survivors of human trafficking.

While students performed fieldwork on behalf of their clients, they also learned core lawyering skills in the seminar, such as client interviewing and counseling, fact investigation, case theory development, and drafting affidavits and advocacy letters.

Hlass co-taught the course with Mary Yanik, senior staff attorney for the New Orleans Workers’ Center and adjunct professor of law at Tulane.  Hlass, Yanik and their students worked with Torres, organizers and community members to prevent immigration authorities from enforcing his deportation.

“Marshal and Nate were a strong team. They did careful legal analysis and they learned from José and his story through hours and hours of deep listening,” said Yanik. “Their work was critical to the filing of this visa application, which offers a path to status for José.”

Torres’ story is not unlike that of many immigrants who come to the U.S. fleeing violence in Central America. He came to New Orleans following Hurricane Katrina in 2005, and helped rebuild the city along with thousands of other migrants during the construction boom that followed the storm.

He arrived through Mexico on freight trains, where he was robbed and threatened. He crossed the border through the Rio Grande and subsequently was stopped by ICE.  Released from a detention center, he was eventually forced to work without pay by a trafficker.

Since arriving in the U.S., Torres and his wife have had two daughters, one of whom requires special medical attention for seizures. In 2015, he was arrested on a drunk driving charge, but despite paying a fine and having his record expunged, he found himself detained by ICE for four months before he was released.

Organizers and members of the Workers’ Center supported José in arguing for his freedom and immigration authorities granted him a stay on his deportation. But then in 2017, the Trump administration’s anti-immigrant policies went into effect and Torres was told to leave the country despite his previous stay.

He would not, instead sought refuge in the church, until the day he was told he could temporarily stay, and apply for the visa that could ultimately set him on a path to permanent residency.

“We feel confident about José’s future and his chances of eventually being recognized as a lawful permanent resident,” Hlass said. “Although José still grapples with the painful experiences he had to overcome, he continues to work with law enforcement investigating human trafficking, in order to achieve justice for himself, and his community.”

As for Torres, after months of being separated from his family, and the struggle of living in fear, he didn’t leave the church for a week after he learned his fate.

“I had to process the idea that I could walk out and be free,” he said. So he took a week, did fatherly things with his girls, enjoyed family.

Once the week was over, he was back at work.

“I do all that I do for family,” Torres said. “My plan is and always has been to work hard, make sure my family is safe and fed, and maybe, one day, the dream is we buy a little house.”