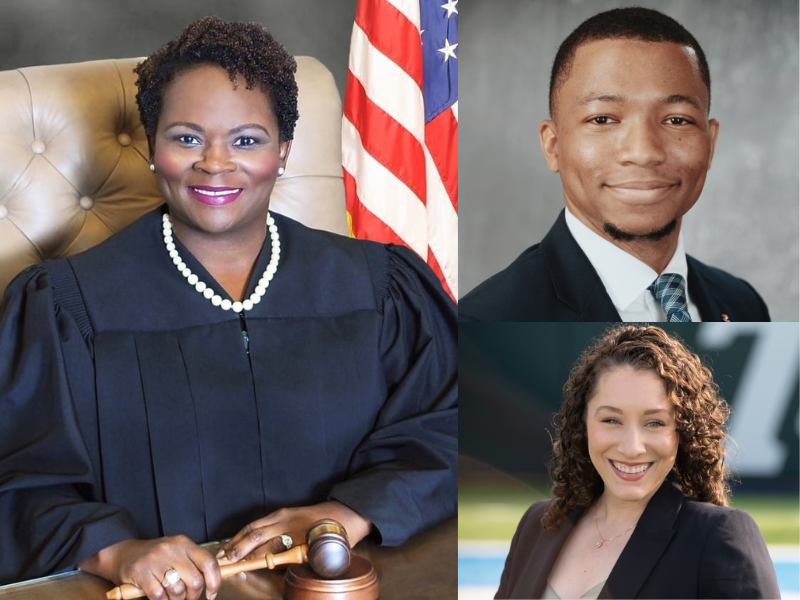 Law students Clarence “Trey” Roby, III and Kayla Williams both received Martinet Scholarships, while Johnson received the Martinet Society’s top award for those who have been pacesetters in the judicial ranks and the bar.

Johnson was recently elected to serve on the Louisiana Fourth Circuit Court of Appeal and previously served for five years as a judge in the Orleans Parish Civil District Court.

Prior to her work in the judiciary, Johnson served as a senior staff attorney with the Law Office of Julie Vaicius, and was an assistant City Attorney in Riviera Beach, Fla. She formerly served as an associate at the Stuart, Fla., firm of Gary, Williams, Finney where she represented hundreds of plaintiffs in Vioxx litigation, personal injury and wrongful death litigation.

Johnson is also a leader in professional and civic organizations. She is a past president of the Louis A. Martinet Society and has served on the board of the Louisiana State Bar Board of Governors and the New Orleans Bar Association. Judge Johnson also is a member of the state bar association’s assistance program for bar members suffering from drug or alcohol problems.

Law students Roby and Williams, both members of the Class of 2023, have been extremely engaged in law school organizations since their first year at Tulane. They received their scholarships based on essays discussing the historic nomination and confirmation of U.S. Supreme Court Justice Ketanji Brown Jackson.

Roby, now a third-year law student, in the spring was part of the Tulane Law team that won the National Black Law Student Association (BLSA) Appellate National competition.  He was named Best Oralist at the competition and his team received the nod for Best Petitioner Brief. Roby is a graduate of Howard University; prior to attending Tulane Law he worked in Brooklyn, N.Y, in advertising including in campaigns for IBM and Toyota.

At Tulane Law, Roby is an active member of BLSA and the Sports Law Society and is co-founder (with Williams) of the Tulane Black Sports Law Symposium, and a member of the Moot Court Program. Currently, Roby is the head coach for the BLSA  Appellate Team and he is a student-attorney in the Tulane Juvenile Law Clinic.

Williams is a third-year law student who has a long history in competitive gymnastics and collegiate athletics. She holds a gold medal in the world gymnastics championships and is the first American to have won the gold at the world competition on the vault.

She represented the University of Alabama and was a four-year All-American Student Athlete, and represented Team USA as the first American world champion. Before joining Tulane Law, she was a director in sports marketing in Birmingham. She is an active member of BLSA and the Sports Law Society and along with Roby is the co-founder of the Tulane Black Sports Law Symposium.

She is a 2022 NBLSA and ABA Negotiations Finalist and is currently serving as head coach for the ADR and BLSA International negotiations team. She also is a student-attorney in the Tulane Civil Rights and Federal Practice Clinic.