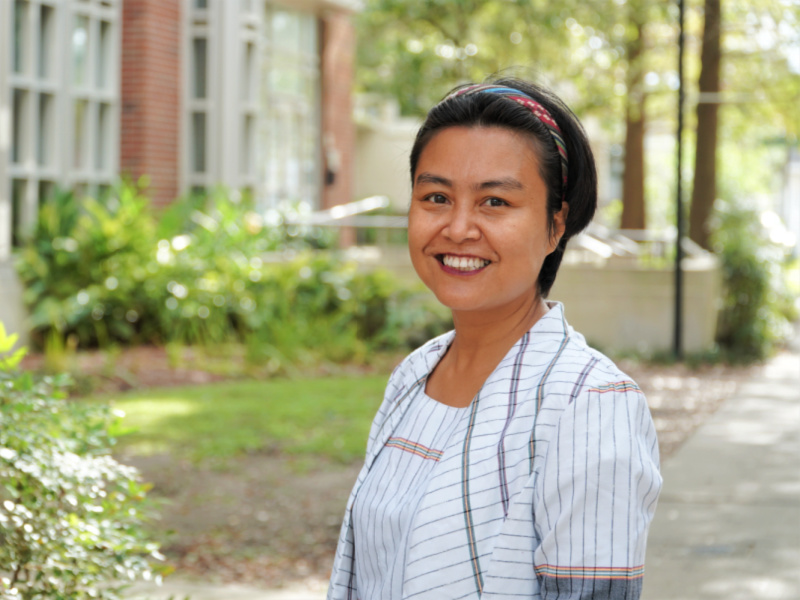 The last time legal activist Thyn Zar Oo saw her mother was in a crowded tea shop where they had to secretly meet in downtown Yangon in Myanmar (Burma).

Oo had been in hiding for months – moving with her children from safe house to safe house, fleeing the military junta that toppled the administration of Nobel Peace Prize laureate Aung San Suu Kyi and President Win Myint in a coup d’etat in February of last year.

“Don’t you ever come back for any reason,” her mother said that day. “Not even for our funerals.”

The meeting was possibly the last between mother and daughter, as on the very next day, Oo would undertake a dangerous trip to leave Myanmar for the U.S. – and Tulane Law School. Her escape from imminent military torture and detention is the stuff of Hollywood films.

Fortunately, Oo arrived safely in June and since then has worked on her research as the first Scholar-in-Residence with The Public Law Center at Tulane. She is an architect of a national humanitarian and rights-based network, a designer of innovative legal aid mechanisms, human rights activist, reformer, legislative expert, and co-founder of the Public Legal Aid Network (The PLAN).   As a reformer, she was constantly under surveillance by the Myanmar military. Things only worsened after the coup, and almost a year later, Myanmar is on the brink of collapse.

Oo has been working to break down existing and outdated military laws since 2013 when the democratically-elected administration of Suu Kyi swooped into power, promising reforms. During those years, Oo and her national network of attorneys and organizations had been tackling the reform of hundreds of laws that fed Myanmar’s corrupt system of justice, moving the country from colonial/military laws towards a new federal Constitution based on democratic reforms.

“Democracy is wanted so much by the people,” Oo said. “Burma will be in turmoil until people have fairness and justice. That is what they want.”

Yet, that work made her a target in her home country. The PLAN is a vast network of people, non-profits and organizations that represent clients, particularly in egregious and arbitrary detentions for speaking out against the junta, Oo said.

The network had reconfigured their delivery operations so well during the COVID-19 pandemic that they were effectively able to represent clients without compromising the safety and security of their team, making them fully prepared to continue their work after the coup, she said. After the coup, the work was even more dangerous.

“The coup did not stop our momentum. We simply took the whole network and followed the same processes we did during the COVID pandemic, made the protocols safe and continued to do the actual work we have always done,” Oo said.

In the spring, military security forces began following Oo – they visited her parents’ home and even reached one of the safe houses just hours after she had been moved. That’s when Oo decided she needed to continue to run the organization from outside the country for her safety and her children’s.

“We were absolutely considered ‘bad influences’ because we were outspoken in defense of those who were detained and tortured, because we vocally condemned the atrocities committed by the Junta like using snipers to shoot people who are protesting peacefully, the overwhelming use of force, air strikes on communities and burning people alive,” said Oo. “We wrote briefs, and we spoke out against these illegal acts.”

The PLAN offices were raided, she said, and lawyers and other members were sometimes beaten, detained, tortured or killed.  She and her children were moved to safe houses for months and communicated with her team using her 16-year-old son’s encryption software.

“He and his friends had used the program, and he understood the danger we were facing,” she said.

That was when she turned to Tulane and The Public Law Center’s Director, David Marcello. Oo had attended Marcello’s summer International Legislative Drafting Institute years earlier. The program for more than 25 years has taught legislators, drafters and advocates from around the world how to craft laws supporting the emergence of free-market economies and democratic forms of government. Oo had brought a Myanmar delegation in 2015, and her work was well-known to him.

With assurances that she could work on her research and assist teaching in the Center, she planned her harrowing escape which involved securing travel papers without being detected and arrested, getting to the airport without discovery and going without communication with her team while in transit to the U.S. with her children.

“No one knew if we had made it or not until we reached Dallas,” Oo said. “At that point, my daughter said, ‘I want to kiss the ground.’ She was so happy to be in the U.S. We knew that until we reached the U.S., we were not really safe.”

“My wife and I breathed a big sigh of relief,” Marcello said, “when Thyn texted that she and her family were in Dallas! We’re very pleased to have her safely settled in here as The Public Law Center’s first Scholar-in-Residence. I’m confident that her land reform work will benefit Myanmar and other governance systems transitioning from former colonial regimes.”

Since her arrival this summer, she has moved all of her civil society work here and has continued working with her team without missing a beat.

“Some of my team members don’t even realize I am in the U.S.,” she said. “The work has continued without disruption.”

In the fall, she received wonderful news – she would see her mother and father again. Her mother arrived in the U.S. in October and her father in November.

As her mother landed in the U.S., she sent her daughter a message. Things had gotten worse back home. “You did the right thing.”