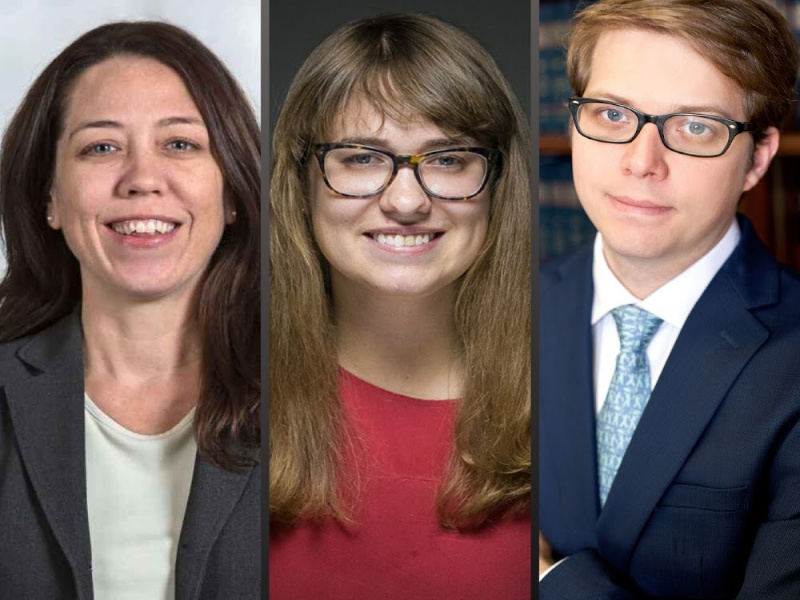 (L-R) Katie Schwartzmann and Mary Yanik are the new directors of the First Amendment and Immigrants Rights clinics, respectively, while Devin Lowell joins the Environmental Law Clinic as an instructor.

As part of a significant expansion of its legal clinical programs, Tulane Law has hired directors for two new clinics and added a third instructor to its environmental law program.

The creation of the Immigrants Rights and First Amendment Clinics were announced last summer in the wake of two major gifts totaling more than $1.4 million to open two new clinics, one from the Silicon Valley Foundation for an immigration clinic and the second from the Stanton Foundation to aid in protecting First Amendment rights.  Both are set to enroll students this Fall.

“We’re delighted to have recruited these three outstanding new colleagues to our faculty,” said law Dean David Meyer.  “They bring exciting energy, ambition, and substantial experience as we open the fifth decade of Tulane’s leadership in clinical education.”

The two new clinics join six existing ones run by the law school where students train with seasoned attorneys, working on real-world cases with clients who otherwise could not afford legal representation.

The clinics, over the past four decades, have provided thousands of hours of free legal work to the New Orleans community and trained thousands of lawyers who have gone on to work in the public sector, lead corporations, run non-profits, enter the political arena, join the judicial ranks, and lead global efforts for greater access to justice.

About our new faculty:

Katie Schwartzmann (L’03) is a leading civil rights attorney and social justice advocate who has been Legal Director at the ACLU Louisiana since 2018, a position she held previously for more than six years. She was a founder of the Roderick and Solange MacArthur Justice Center, a public interest law firm focused on criminal justice reform.

In 2011, Schwartzmann was named the Managing Director of the Southern Poverty Law Center’s Louisiana office, supervising a staff, investigators, attorneys, and others focused on education reform, immigrant justice and prison reform.  She was a lead attorney who filed a class action lawsuit against conditions at the Orleans Parish Prison.

Mary Yanik. As a staff attorney at the New Orleans Workers’ Center for Racial Justice, she has regularly represented dozens of clients seeking U-visas because of workplace abuse, in addition to representing immigrants and guest workers in complaints before the Department of Labor, National Labor Relations Board, and Equal Employment Opportunity Commission.

She also served as local and trial counsel in federal litigation challenging the constitutionality of Louisiana’s anti-immigrant marriage license law and of prolonged immigration detention in Louisiana. Most recently, she was one of the lead attorneys representing an immigrant whistleblower who raised questions about working conditions at the now-collapsed Hard Rock Café site in New Orleans. The worker was deported despite requests from City Council and the Louisiana Workforce Commission to release him to participate as a material witness in ongoing investigations into the collapse.

Yanik also has been an adjunct professor at Tulane Law, co-teaching the Immigrants’ Rights Practicum course along with Prof. Laila Hlass, where law students in collaboration with the New Orleans Workers' Center for Racial Justice help represent noncitizens seeking humanitarian immigration protections. Under Yanik and Hlass’ supervision, law students helped survivor of human trafficking Jose Torres – who spent more than a year living in a local church to avoid deportation, successfully petition for a pathway to stay in the United States.

Devin Lowell (L'15). Since his graduation from Tulane Law in 2015, Lowell has worked at the Murray Law Firm taking on complex litigation ranging from environmental and toxic tort cases to consumer class-action and product liability cases. His clients included - among others - former oil refinery workers injured by asbestos exposure in the U.S. Virgin Islands, Louisiana landowners dealing with land contamination resulting from oil and gas production, and patients across the country injured by faulty medical device implants.

A native of Kansas, he earned his bachelor’s degree in journalism and political science at the University of Kansas.