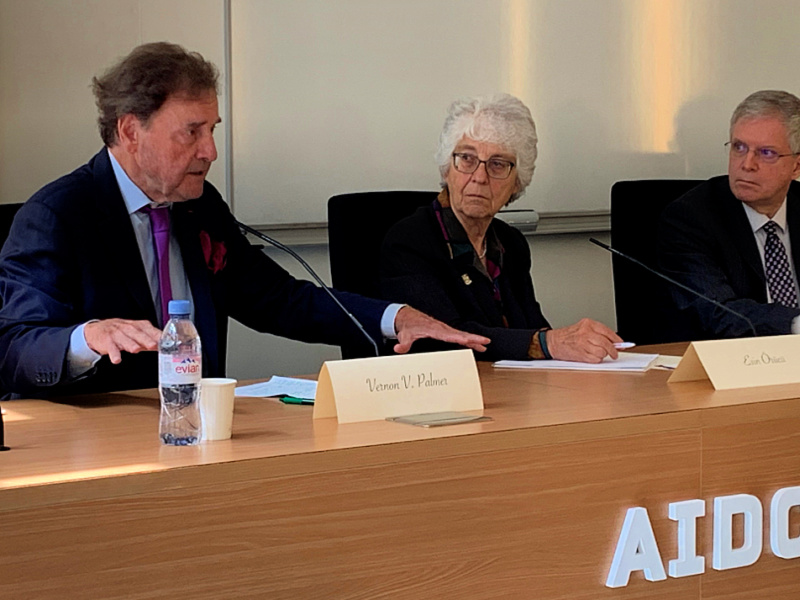 Tulane Law Professor Vernon Palmer was honored on May 16 as one of the leading scholars of the world’s legal systems by the International Academy of Comparative Law (IACL).

Palmer joined a select few international scholars – and the only American – honored as “Five Great Comparatists” during a ceremony Monday in the Academy's offices in Paris. Palmer was honored for his landmark contributions to the field, an honor created in 2017 by the Academy and awarded to only one other group of five scholars to date.

Palmer, Thomas Pickles Chair and Co-Director of the Eason Weinmann Center for Comparative Law, joined his class of Great Comparatists at a roundtable afterward to discuss the future of the field. Professor Joel Moneger of the University of Paris- Dauphine, a long-time instructor in Tulane's international law program in Paris, delivered a laudatory address on Palmer's contributions to the field during the ceremonies.

In presenting the honor, Professor Moneger noted that Professor Palmer’s preeminence in comparative law was aided by the fact that he studied at Tulane Law School as a student and has taught at the school for more than half a century. Palmer, in accepting the award, acknowledged the same advantage, expressing gratitude for “his origin” in New Orleans and at Tulane, where he has taught for 52 years. Palmer noted that the first lecture delivered at Tulane Law School on its founding 175 years ago was on comparative law, specifically the influences of French and Spanish law, as well as the common law on the Louisiana Civil Code, and that "comparative law has been Tulane’s lifeblood ever since.”

Tulane Law Dean David Meyer, who attended the event, agreed that Palmer's achievements in comparative law have made Tulane a leader in the field.

“To be celebrated by one’s peers as one of the 10 most influential scholars in a discipline is an enormous achievement,” said Law Dean David Meyer. “The recognition is richly deserved by Vernon and a wonderful affirmation of Tulane Law School’s storied and vital leadership in comparative law.”

Following the official ceremonies, the firm White & Case hosted a Tulane Law alumni reception at its picturesque offices in the Place Vendome. Alumni attended from across Europe for the occasion, including from England, Germany, and Thailand.  The event was the first Tulane Law alumni event in Europe since before the COVID-19 pandemic and was made possible both by White & Case as well as Judge Ian Forrester (MCL ’69), a former member of the General Court of the European Court of Justice and who co-hosted the reception.  A former partner at White & Case before his appointment to the ECJ  2015-20, Judge Forrester is also a longtime member of the law Dean’s Advisory Board.

This is the second time that White & Case has hosted a Tulane Law alumni reception in Paris. In 2014, the firm hosted a gathering of Tulane Law students who met the late U.S. Supreme Court Justice Ruth Bader Ginsburg, who was teaching at the law school's Paris summer program.  White & Case has been the prime sponsor of Tulane Law’s annual Energy Law Conference, the most recent one this past March.

A New Orleans native, Palmer earned his law degree at Tulane in 1965, and later received a master’s and PhD in law from Yale and Oxford universities, respectively. He has taught at Tulane since 1970 and is currently celebrating his 50th year of teaching.

Over the years, Palmer has done extensive research abroad in France, Germany, Spain, Italy, Switzerland, Japan and Africa.  He is one of three Tulane Law faculty members who are titular members of the International Academy, along with James Gordley, the W.R. Irby Chair in Law, and Guiguo Wang, the Eason Weinmann Chair Emeritus of International and Comparative Law.  Palmer is now serving as a National Reporter for the United States to the Academy’s upcoming international conference in Paraguay.

Among his notable accolades: Paris-Dauphine University honored him as a Docteur en Droit Honoris Causa in 2013, and in 2006, French President Jacques Chirac knighted Palmer as a “chevalier” in the French Legion of Honor, the country’s highest civilian award, for his efforts to build stronger ties between the United States and France. Earlier in his career, Palmer received from the French Prime Minister the Palmes Académiques.

He has written more than 50 books and articles focusing on his research in comparative law and legal history, and his most recent , The Lost Translators of 1808 and the Birth of Civil Law in Louisiana (Univ. Georgia Press 2021), solves a legal “whodunit” in identifying the pioneers who wrote the English translation of one of Louisiana’s founding documents.

In 2017, the IACL, which has more than 700 members whose work is focused on legal systems across the globe, honored its inaugural class of “Five Great Comparatists.” They included Mary Ann Glendon of Harvard Law School; Heinz Kötz of Bucerius Law School and the Max Planck Institute for Foreign and Comparative Law; Xavier Blanc-Jouvan of the University of Paris I; Jean-Louis Baudoin of Montreal University and the Quebec Court of Appeal; and Rodolfo Sacco of the University of Turin.