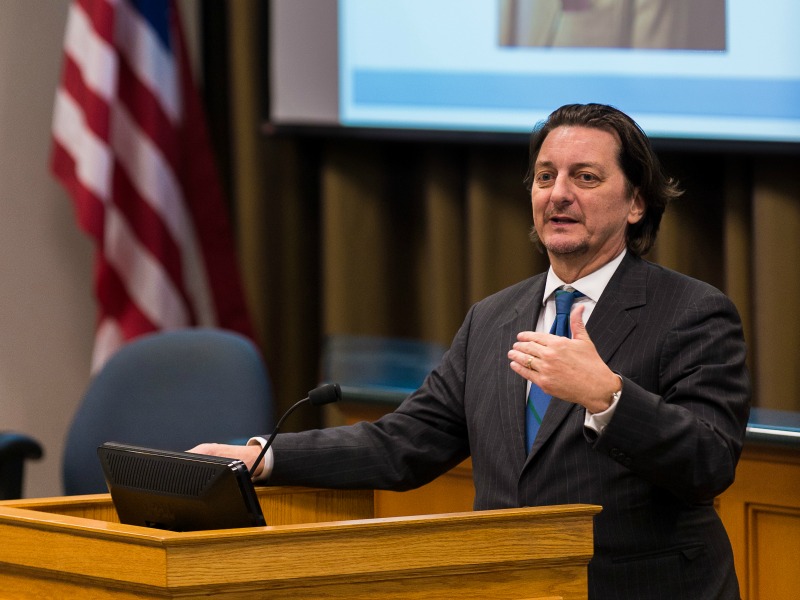 Tulane Law Professor Martin Davies, director of the Maritime Law Center, has been awarded a Doctor of Civil Law degree by Oxford University, a prestigious honor for scholars who have made a lasting impact in their field.

The Doctor of Civil Law degree is considered to be a “higher doctorate” degree, and at Oxford, “higher doctorates are earned awards of the University whose fundamental purpose is to recognize excellence in academic scholarship.”

Davies received the award in a lavish ceremony May 21 in England, where he was honored with regalia recognizing his latest degree.

“This is a richly deserved recognition of Martin’s truly preeminent standing among scholars worldwide in the field of maritime law,” said law Dean David Meyer. “We are enormously proud of Martin’s accomplishment and extraordinarily fortunate to count him as a colleague at Tulane Law School and to have him leading our Maritime Law Center.”

Oxford’s Doctor of Civil Law degree is awarded based upon a rigorous review by referees of 12 publications representing the scholar’s body of work and requires a determination that it meets exacting standards of excellence, including that it is “of the absolute highest quality,” “authoritative,” and “of global reach and international importance in the field.”

The degree is conferred rarely; the last time it was awarded within Davies' college was in the 1960s.  It will be formally presented to him next May during Oxford’s graduation exercises.

Davies is an international authority on admiralty law who has taught in Australia, England, Singapore and Italy as well as the United States. He joined the Tulane Law School faculty in 2000 after a visiting appointment in 1999.

Also, Davies in the author of nearly a dozen books on maritime law, in multiple editions, and has written dozens of articles and essays contributing to the subject.

He previously taught at the University of Melbourne, Australia, where he was the Harrison Moore Professor of Law. Davies, who has been a professional actor, also has worked as a consultant for maritime law firms for 30 years. He serves on the Editorial Board of Lloyd’s Maritime and Commercial Law Quarterly and the Melbourne Journal of International Law.