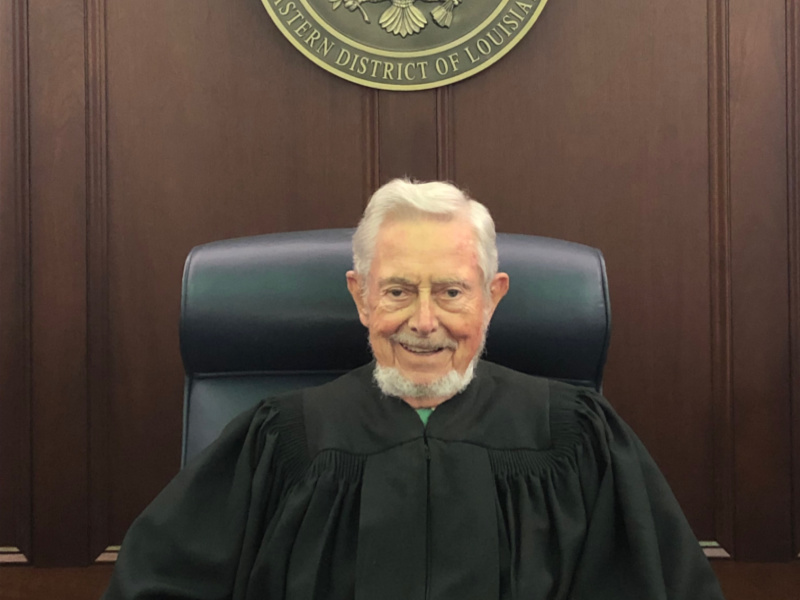 U.S. Bankruptcy Judge Jerry Brown -- who dedicated countless hours to training and mentoring Tulane Law students over the years -- also was known as one of the most accomplished bankruptcy judges in the country, respected for his intelligence, expertise, even demeanor, and good humor on the bench. He died early Wednesday after battling pneumonia.

As the story goes, Judge Jerry Brown (L’59) liked to credit luck for his remarkable life and career.

He was lucky, he would say, that despite his small-town western Kentucky roots he got his law degree at Tulane Law School. He was lucky that he was chosen to clerk for the legendary Judge John Minor Wisdom (L’29) in the era that defined the judge’s crucial civil rights decisions. He was lucky that he chose to study in New Orleans, because it was where he met his wife of 60 years, Florence (NC’56), also a Tulane graduate.

And, it was luck that brought him to a seat on the federal bankruptcy bench.

“It wasn’t luck at all, but hard work and his wonderful personality that brought him all his success,” she said.

Brown, recognized as one of the most accomplished bankruptcy judges in the country, respected for his intelligence, expertise, even demeanor, and good humor on the bench, died early Wednesday after battling pneumonia. He was 89.

For his dedication to Tulane, the profession and the bench, Brown was inducted into the Tulane Law’s Hall of Fame in 2019.

“Jerry Brown was a model judge and a warm, endearing human being,” said Law Dean David Meyer.  “He was also an ardent Tulanian and always ready to help.  A naturally gifted teacher and mentor, both in the classroom and on the bench, his legacy will live on in the lives of the lawyers whose careers he shaped over generations.”

Everyone recognized Brown as a brilliant and fair jurist, one that sweetened the experience of the courtroom with his affable personality and dry sense of humor.  Luck, in fact, was on the receiving end of Brown’s interactions, most who knew him say.

“He was a perfect representative of the court – he treated the lawyers with respect, he honored the bench and he was a role model for all of us practicing law,” said U.S. Bankruptcy Judge Meredith Grabill (L’06), a friend, colleague and fellow Tulanian. “But personally, he was funny and charming, and a pleasure to be around.”

Brown was a talent. He graduated near the top of his high school class in his small town of Marion, Ky., where he embraced his time on the debate team.  He went on to finish his undergraduate degree with honors from Murray State University, also competing in debate. While there, a professor encouraged him to go to law school.

Like so many others of his time, he served in the Army in Europe in the post-War years, before finally taking the professor’s advice and taking up Tulane’s scholarship offer.

There was a story with that decision, too. Brown credited – at least partly – coming to Tulane because his radio would get a clear channel from New Orleans’ famed Roosevelt Hotel Blue Room. He loved music, particularly Dixieland Jazz.

“The idea of New Orleans and its musical legacy was really a draw for him,” Arnold said.

At Tulane, he was a top student, serving on the Tulane Law Review as an assistant editor, and after graduating, becoming Wisdom’s second law clerk. The two got to know each other well, both while working in the court and touring the district, which included Texas, Louisiana, Mississippi, Alabama and Florida. Wisdom also reviewed Brown’s writing – making corrections to draft opinions the young lawyer had authored.

“He came to admire not only Judge Wisdom’s brilliant legal mind but also his commitment to fairness and equal justice…” wrote Arnold in a profile of Brown last year.

He was a generalist, but also did a lot of work in corporate reorganizations and in bankruptcy law. In 1992, he was appointed as a U.S. Bankruptcy Judge where he served for a whopping 28 years until his retirement in August of 2020.

“He was not only an influence on the entire Bankruptcy Bar, but the entire district,” said Grabill. “He has literally trained generations of lawyers.”

The two came together because of their Tulane roots, both serving on the Tulane Law Review Board of Advisory Editors, a committee of alumni who help advise the school’s flagship journal.

Grabill said the two connected because they were both from small towns, he from Kentucky, she from Tennessee.

“It was a little bit of ‘how in the world did we get here?’” Grabill said. “I think he loved everything about the court -- loved the people and the process and the lawyers. He loved all of it. He was remarkable.”

He never stopped supporting Tulane, as a professor in the Tulane Trial Advocacy program and as President of the Tulane Inn of Court, as well as the Law Review advisory board and lending his courtroom and services as a Judge each year in the Law School’s Lawyering Skills Bootcamp. His love of Tulane led him to fund an endowed scholarship upon his passing.

If law was his passion, his love was his family and his wife, Florence.  Together they raised two sons, Scott and Allen, and a daughter Vanessa.  He was deeply proud of his children and grandchildren, and he and “Flo” traveled all over the world together – including a visit to Ukraine some years ago.

Relatives and friends are invited to attend a memorial service in New Orleans at Rayne Memorial Church, 3900 Saint Charles Ave., New Orleans, LA  on Saturday, June 12, 2021 at 10 a.m.  Visitation begins at 9 a.m. In lieu of flowers please consider a donation to the Honorable Jerry A. Brown Endowed Law Scholarship at giving.tulane.edu/law or by check sent to Tulane University, P.O. Box 61075, New Orleans, LA 70161-9986